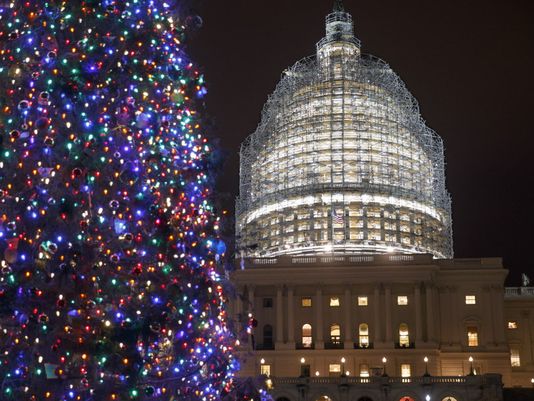 “You can lead a man to Congress but you can’t make him think,” quipped Milton Berle in 1950. Last December’s congressional approval of the 1,603-page, $1.1 trillion omnibus bill (known as “Cromnibus,” because it was also a Continuing Resolution) also shows you cannot make congressmen read. Unfortunately, as usual, politicians refused to let their ignorance restrain their power over Americans’ lives and tax dollars.

After spending much of the fall reapplying for their current jobs, members of Congress returned to Washington in a lame-duck session and heaved all of their laggardly tasks into a 15-plus-pound pile of paperwork that no individual member had time to comprehend before approving. House Speaker John Boehner (R-Ohio) pooh-poohed any concerns about the process: “Understand, all these provisions in the bill have been worked out in a bicameral, bipartisan fashion or else they wouldn’t be in the bill.” And never before in American history have there been any problems from the deals that Republican and Democratic pooh-bahs carved behind closed doors.

The bill unleashed a blizzard of new dictates regarding marijuana in Washington, D.C.; bread in school cafeterias; sleepy truckers; portrait painting in federal offices; reckless speculation by federally insured banks; campaign contributions from rich folks; lecherous congressional aides; aid to Egypt and Israel; and dozens of other subjects. Both conservatives and so-called liberals were outraged at provisions popped into the bill with no warning or public hearing. But members of Congress believed they are entitled to rule regardless. Rep. Robert Pittenger (R-N.C.) captured that mindset perfectly when he declared shortly before the vote, “Let’s go govern.”

Some defenders of Congress acted like the Cromnibus process was an aberration — like a once-a-generation family reunion where a thrice-removed cousin goes on a bender and smashes up a few tables. But it was more like the depraved uncle who goes on a liquored-up rampage at every Christmas dinner.

Congress in recent years has repeatedly heaped vast amounts of legislation and appropriations into a single bill that is rushed to approval on bogus deadlines. Sen. David Boren (D-Okla.) observed in 1991 that congressional “bills are five times longer on the average than they were just as recently as 1970, with a far greater tendency to micromanage every area of government.” The Washington Post editorialized on the eve of a 1998 congressional vote on a massive appropriations bill, “Most members will have only the vaguest idea of what the bill contains. Nor will they have more than a fleeting opportunity to amend the measure. The future: Are you for it or against it? You have 15 minutes to decide.” Each time such a megabill passes, the months afterwards are filled with members of Congress caterwauling that they were victimized by unnoticed provisions in the bill.

Ignorance of the law is an excuse only for the members of Congress who voted for the law. And the thicker a legislative bill becomes, the more recklessly the members behave. Remember the Obamacare bill, which clocked in around 2,400 pages.

Members of Congress might object that it is unreasonable to expect them to understand everything that they vote on. In the same way that some people portray obese people as victims of all the calories they helplessly consume, are politicians victims of all the power they have grabbed?

The Cromnibus debacle occurred in part because the members are simply too important to read. A 1977 survey revealed that the average member spends only 11 minutes a day reading at work. The results of that survey were so embarrassing that no follow-up has been done in subsequent decades. There is no evidence that today’s representatives are more bookish than their 11-minute-a-day predecessors. Perhaps this is a venerable tradition; Will Rogers suggested in the 1920s that representatives adopt the slogan “Why sleep at home when you can sleep in Congress?”

Cromnibus epitomizes the charade of contemporary paternalism. It would not have passed without the members’ grandiose self-delusions of benevolence. Rep. Sam Farr (D-Calif.) urged his colleagues to support Cromnibus: “Hold your nose and make this a better world.” In 1999 the Journal of Personality and Social Psychology published a study that explained why “the incompetent will tend to grossly overestimate their skills and abilities.” The article concluded that “those with limited knowledge in a domain suffer a dual burden: Not only do they reach mistaken conclusions and make regrettable errors, but their incompetence robs them of the ability to realize it.” The article quoted the apt saying by Charles Darwin that “ignorance more frequently begets confidence than does knowledge.” While the study focused largely on people scoring in the bottom quartile on intelligence tests, the same pattern of overconfidence and incompetence characterizes many members of Congress.

Senators and House members presume they are so superior to common folks that citizens will be better off even when politicians have little clue of what they are dictating to the American people. Earlier in the week that Cromnibus passed the House, many members justifiably railed at Obamacare architect Jonathan Gruber for publicly scoffing at the stupidity of voters. But the members out-Grubered Gruber by carelessly rubber-stamping a 1,600-page Pandora’s Box.

Almost no sober person handles his own life the way that Congress legislates. Would anyone hire a lawyer who, tasked with negotiating a complex business deal, signed off on a hefty contract that the lawyer admitted he never bothered to read? Such an admission would spur a lawsuit for malpractice — a specter that members of Congress have no reason to fear.

The Founding Fathers were keenly aware of the peril of this type of reckless legislative behavior. James Madison warned in Federalist 62, “It will be of little avail to the people … if the laws be so voluminous that they cannot be read, or so incoherent that they cannot be understood: if they be repealed or revised before they are promulgated, or undergo such incessant changes that no man who knows what the law is to-day can guess what it will be to-morrow.” Madison was thinking of the citizenry when he wrote that line — but the same warning now applies to legislators themselves.

Many surveys in recent years have demonstrated the ignorance of average citizens on the nuts-and-bolts of contemporary democratic procedures. But is the average member of Congress, voting on the average bill, more ignorant than the average voter making his choice between two congressional candidates? Comparing a congressional election with the average Capitol Hill vote on a hefty legislative package, the percentage of voters who have examined the candidates and issues is probably higher than the percentage of members of Congress who have actually read and comprehended the bill. The voters only have to vote for congressional candidates once every two years, while members near the end of the legislative session may have to vote 20 times or more a day. The citizens’ vote is practically a will-o’-the-wisp, while members blithely vote in favor of permanently increasing government power. Besides, the citizen is not being paid to be a competent voter, while members have awarded themselves a salary of $174,000 a year for the privilege of dictating rules to other Americans.

Once congressmen are routinely voting on things that they have not read and do not understand, we are left with a blind trust in their good characters. But as British philosopher Bertrand Russell warned in 1938, “In a social system in which power is open to all, the posts which confer power will, as a rule, be occupied by men who differ from the average in being exceptionally power-loving.” Power lust is no substitute for legislative due diligence.

One of the great mysteries of contemporary paternalism is the notion that elected representatives are competent stewards of the public good. People don’t get elected to Congress because they scored well on multiple-choice tests on public-policy minutiae. H.L. Mencken aptly described an election as “a sort of advance auction of stolen goods.” And there is nothing that happens after Election Day that makes the winners either competent or trustworthy to make laws.

America’s high-school civics textbooks need to be updated with a chapter on “The Blindfolded Weasel School of Legislating.” Some idealists may believe that a sufficient number of scoldings by editorial pages and talk-show hosts will spur members of Congress to repent of their reckless ways. But thanks to pervasive gerrymandering, most of them have seats that are sufficiently secure that they have nothing to fear as long as they are not indicted on at least half a dozen criminal charges. Members will harvest a flood of campaign contributions for the favors that Cromnibus disbursed. And, at this point, they care far more about pleasing their donors than about serving voters.

In the weeks after the Cromnibus bill passed, news stories trickled out detailing how the legislation imperiled Americans’ rights and liberties and wasted their tax dollars. But citizens already knew that, rather than a contest between Democrats and Republicans, Capitol Hill is routinely dominated by the Know-Nothing Party. It is time to repeal politicians’ divine right to govern recklessly.