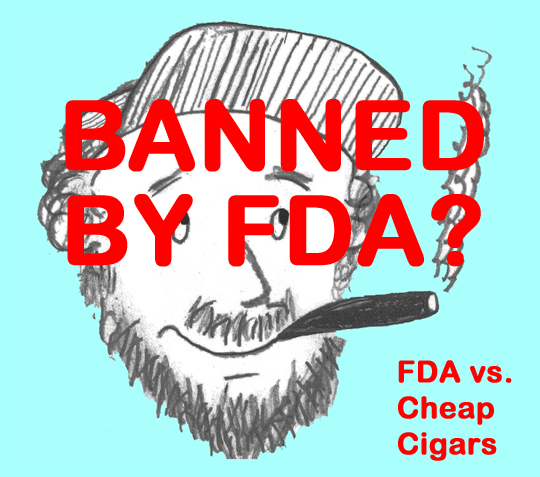 The Food and Drug Administration (FDA) is finalizing regulations that could ban the sale of most of the cigars currently available in the United States. The FDA last year uncorked a 241-page, 70,000 word barrage of proposed restrictions on the sales and marketing of tobacco products. Some congressmen are pushing back against the agency, but it is unclear whether cigar smokers can escape the nanny-state’s sacrificial altar.

The FDA proposes requiring companies to file Premarket Tobacco Applications for any tobacco product that was not being sold in the United States as of Feb. 15, 2007. Almost four-fifths of currently sold cigars could effectively be banished from the market under that provision. Manufacturers and importers would be obliged to either cease selling such items or spend years and hundreds of thousands of dollars seeking FDA approval for each product.

The FDA suggests that it might exempt from regulation “premium cigars” that cost at least $10 apiece. There is little or no difference in ingredients between most handmade cigars that cost more than $10 and those that cost less. Does the FDA believe that only people with money to burn deserve free choice? George Washington University professor John Banzhaf groused that the FDA’s purpose “is to protect public health, not make it easier for politicians to raise fortunes at ‘smokers’ where only premium cigars are likely to be produced or distributed.” Competitive Enterprise Institute counsel Sam Kazman observes, “The controversy over FDA’s distinctions between cigar categories is a sign that the agency should keep its hands off cigars altogether.”

Even if the FDA initially spares “premium” smokes, this will soon be portrayed as a loophole that must be closed. Mitch Zeller, the head of FDA’s Center for Tobacco Products, stresses that the agency’s proposal “will allow us to propose further regulatory action on these and yet-to-be conceived tobacco products.”

The FDA regulatory notice evokes a vision of bureaucrats as knights on white horses, riding in to save people from themselves. The FDA proclaimed, “All tobacco products containing nicotine are addictive, and FDA is not currently aware of any tobacco products that do not contain nicotine.” The FDA offers no data on how many cigar smokers become addicted. Regardless, the feds must rationalize that restrictions on cigars will be liberating because all smokers are enslaved to their vice.

Even though teenage tobacco use has fallen more than 50 percent since 1997, the FDA invoked children to justify smiting everyone’s freedom. The FDA’s Federal Register notice frets about the potential impact of nicotine on adolescent minds. Smoking a few cigars during the senior year in high school is far less harmful than perennially drugging kids on FDA-approved amphetamines. Recent research shows that juveniles who use Ritalin and other ADHD medicine can suffer memory loss, stunted growth, insomnia and nervous tics. The FDA has a long history of ignoring or downplaying the catastrophic harm from drugs it sanctions.

There are no solid numbers for how many Americans regularly smoke cigars; a 2010 federal survey signaled that 13 million people had smoked a cigar in the prior 30 days. Excessive consumption of cigars can cause oral and throat cancers and the FDA notes that “heavy cigar smoking or inhalation of cigar smoke leads to increased risk of coronary heart disease and may cause chronic obstructive pulmonary disease.” However, the FDA does not define “heavy cigar smoking” and has no data on how many Americans smoke enough stogies to fit that category. Occasional smoking of cigars is far less toxic than daily smoking of cigarettes.

The Obama anti-tobacco campaign is driven by zealotry, not science. The title of Senate testimony last year by the director of the federal Office of Smoking and Health, Timothy McAfee, was “Ending Tobacco Use in the United States — Our Past, Present, and Future.” The feds are carrying out a “strategic action plan” with “the bold vision of a society free from tobacco-related death and disease.” The federal Centers for Disease Control includes an Orwellian-named “School-Based Surveillance Branch.” Expecting reasonable tobacco regulations from those bureaucrats is like asking a minister exactly how much sin he should tolerate in parishioners.

It is unclear whether cigar smokers will be taxed or regulated into oblivion. In 2009, the federal tax on small cigars was boosted 27-fold and the tax on large cigars jumped by up to 700 percent; low-priced cigars were hit with far higher percentile tax hikes than expensive smokes. The Obama administration is pushing for another 93 percent boost in federal cigar and tobacco taxes.

The proposed anti-cigar regulations are based on the principle that the feds deserve moral and legal authority to prohibit any behavior they decree is harmful. Once this principle is canonized, the government can promulgate new bans on caffeine, junk food and other allegedly addictive substances. But don’t expect to see a Federal Register notice on the perils of total subjugation by imperious bureaucrats.