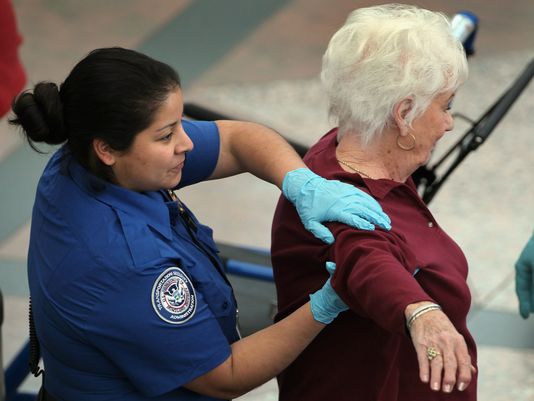 TSA has no excuse to continue the groping

Last August, Transportation Security Administration chief John Pistole attacked an article I wrote, stating that it was “Misleading, inaccurate and unfairly disparages the dedicated (TSA) workforce. … We will not sit back and allow misinformation and conjecture to malign our employees.”

Pistole resigned last December — in time to miss the uproar this week about TSA agents failing to detect 95% of the weapons and bombs smuggled past them by Inspector General testers. While Pistole is leading the PR pushback to absolve his former agency, the I.G. report is the latest confirmation that TSA continues blindly blundering and pointlessly abusing Americans’ rights and privacy.

Shortly after TSA was created in late 2001, one of its early mottoes was “Dominate. Intimidate. Control.” From the start, the TSA put more focus on browbeating hapless travelers than intelligently focusing on actual aviation hazards.

Though Transportation Secretary Norman Mineta promised that TSA would hire “the best and the brightest,” TSA was soon busy issuing blanket denials in response to employee abuses. In 2004, I wrote a New York Times op-ed detailing arrests of TSA agents around the nation for looting travelers’ luggage. At the time the piece came out, the TSA was adamant that baggage thefts by its agents were a minor, localized problem. A few months later, TSA announced a de facto nationwide class action settlement for 15,000 passengers who had formally complained of being pilfered by TSA agents. More than 400 TSA agents have been fired for stealing from travelers.

In 2007, TSA expanded its covert behavior detection teams to search out tell-tale signs of dangerous travelers. More than 30 TSA agents complained in 2012 that the behavior-detection program at Boston’s Logan International Airport, which relied on idiotic terrorist profiles such as black guys wearing baseball caps backward or Hispanics traveling to Miami. At the Newark airport, TSA agents complained that supervisors pressured them to fabricate false charges against illegal aliens to boost the program’s arrest numbers.

Thousands of TSA agents continue roaming airports as part of the Screening of Passengers by Observation Techniques (SPOT) program, conducting “chat-downs” and ferreting out “micro-expressions” that signal trouble. TSA’s secret checklist of dangerous traveler traits, which recently leaked out, includes yawning, throat clearing, “wringing of hands,” “widely open staring eyes,” and gazing down. The most ludicrous warning sign is “excessive complaints about the screening process” — probably not the first trick terrorist groups teach would-be suicide bombers. No wonder that reports by the Inspector General and Government Accountability Office found that the TSA’s behavior detection program is ineffective and a waste of tax dollars.

In 2010, TSA expedited deploying of whole body scanners that captured nude images of travelers. The Electronic Privacy Information Center labeled the scanners “One of the most sweeping, most invasive and most unaccountable suspicionless searches of American travelers in history.” Travelers who objected to the see-all scanners were often intentionally brutalized with “enhanced” pat-downs to teach them a lesson. USA TODAY reported that, “the new searches … require screeners to touch passengers’ breasts and genitals.” TSA has also been caught repeatedly lying about the scanner’s health perils; a PBS-ProPublica report revealed that one type of widely-used scanner (which was discontinued in 2013) could cause six to 100 cancer cases per year among travelers. The fact that the TSA agents failed 95% of the recent undercover tests proves that the whole body scanners are far less reliable than the agency claimed.

In its early days, TSA promised “no weapons, no waiting.” But the agency has long since claimed a prerogative to severely disrupt travelers’ schedules with unpredictable long lines. No one knows how many millions missed flights TSA has caused.

The Department of Homeland Security admitted in 2011 congressional testimony that “the large majority of travelers pose no security risks.” TSA cannot admit this self-evident truth without also conceding that it is pointlessly abusing and delaying millions of travelers every day. Instead, TSA continues a “security theater” routine that is far more effective at subjugating Americans than protecting them.

TSA chieftains have perpetually promised to reform their agency but the scandals continue. Federalizing airport security was a knee-jerk reflex after 9/11. Like the PATRIOT Act, it presumed that vesting unchecked sweeping power in government agents would be a magic bullet to vanquish all threats. But after more than a dozen years of pratfalls, it is time to admit that TSA, after groping millions of Americans, has no excuse for groping millions more.

One Response to USA TODAY: TSA has no excuse to continue the groping