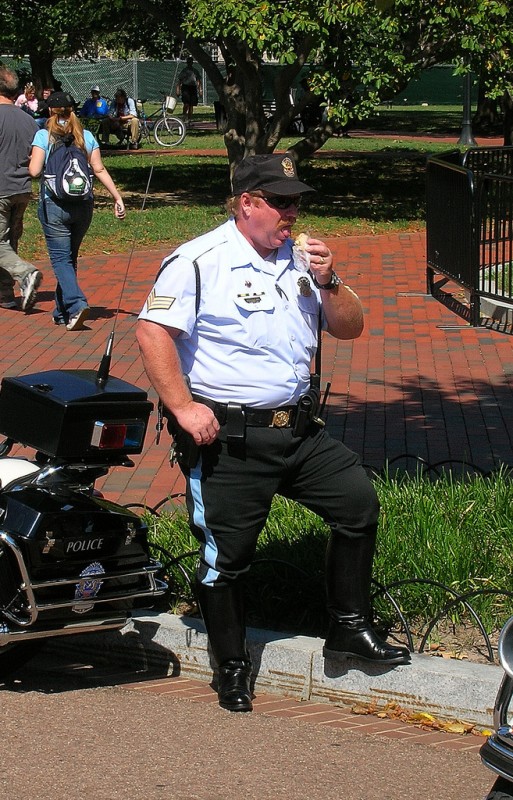 On a Sunday morning early last summer, I was driving south across the Potomac River to a hike in Fairfax County, Virginia. The previous night the hike leader posted online a map of the jaunt. It looked like a typical suburban stroll until I saw a Dunkin’ Donuts marked near the start point. As the Food and Drug Administration has warned, donuts can be addictive and publicizing the location of donut stores can utterly destroy people’s free will. (Or maybe I am confusing this with the FDA’s hectoring on cigarettes.)

Regardless, I woke up the next morning craving a chocolate donut. I left early to allow time to raid Dunkin’ Donuts pre-hike. With my usual “rolling chaos” style, I didn’t bother writing down the street address. I reckoned it was a half a mile past the turnoff on Rt. 50 for the hike. And I assumed that every Dunkin’ Donut franchise is prominently located right next to the highway.

No such luck: the store was nowhere to be seen. Maybe it was a clandestine pastry operation?

After driving several traffic lights beyond where the store should have been, I decided to hustle back to where the hoofing would commence. I saw a left-turn lane on Rt. 50 that simply begged to be exploited. Admittedly, there was a minuscule “No U-Turn” sign, but I assumed it didn’t apply to 1999 Ford Contours, at least not to ones painted black.

There was no traffic coming so I hooked around. A few moments later, I looked in the rear-view mirror and saw that I was being followed by a dinky little Chevrolet with lights flashing from about eight different places on the vehicle.

I figured it was too soon for drivers to be celebrating the Fourth of July and too late for Cinco de Mayo, so …

I pulled into the parking lot of the International House of Pancakes — the only bustling spot along that road on Sunday morning.

I dug out my driver’s license and my vehicle registration, took off my sunglasses, and prepped for Stupid Confused Driver Routine #37.

Several minutes later two cops stepped out of the Chevrolet. Both were wearing heavy Kevlar vests —which looked peculiar because this was not a high-crime area, excepting sociopaths who violate stupid traffic regulations. Maybe they larded on the extra layer to atone for riding around in that Chevrolet. I was puzzled why they were decked out as if every grandmother with one burnt-out tail light would engage in a suicidal shootout.

A 30ish black cop strode up to my rolled-down window while his partner — a solemn-looking white guy who looked to be auditioning for Assistant Grand Inquisitor —maneuvered to the passenger side of my car.

“Do they have U-turn laws that people have to obey in Maryland?’

I thought about mentioning that U-turns are good for the environment because they reduce greenhouse-gas emissions but my hunch was these guys were not Sierra Club members.

“Have you ever gotten a traffic ticket in Virginia?”

“No,” I answered honestly. He didn’t ask if I’d ever been arrested on trumped-up felony charges in Fairfax County, and I didn’t want to interrupt his interrogatories with pointless trivia.

He looked over the inside of my car and scowled. There was an extra hat, shirt, and pair of socks on the back seat, and the shotgun seat and front floor were strewn with battered street maps. Happily, I didn’t have any ammo boxes openly displayed. And I was wearing hiking boots and sporting a scruffy beard — fitting the profile of guys who tramp around in the woods, for better or worse.

He took my license and registration, and he and his bulked-up buddy went back to their dinky car.

They were gone between 5 and 10 minutes. I figured it would not do to speed off and holler at them that I had to leave in time to catch the hike.

It would not have surprised me if they had asked to search my car. If they had done so, I would have politely refused permission. If they had insisted, I would have told them to come back with a warrant. That could have easily gotten me arrested or at least preempted the rest of the day. I had no narcotics or guns in the car —the only thing that would have been considered suspicious was invoking my constitutional rights. I’d be damned if I’d submit to a warrantless search.

As they sat back in their car doing their homework, I itched to know what they were seeing in law- enforcement databases on my name, license, and registration. Were they aware that my blog was a hotbed of cynicism and bad attitudes towards government? Or that I have written often about citizens’ right to own firearms to resist government tyranny? I have also done articles on how police have relied on ludicrous pretenses — such as Grateful Dead bumper stickers — to harass innocent drivers. I have also attacked police departments that routinely confiscate drivers’ property on the shabbiest of pretexts.

Would the Fairfax police see that my vehicle registration had been suspended for a month five years earlier? The Maryland Department of Motor Vehicles had claimed that I was guilty of driving without auto insurance — an absurd accusation which GEICO repeatedly assured them was false. No matter: the DMV decreed that my registration was canceled until I paid a $1000+ fine into a state fund to compensate victims of auto crashes caused by uninsured illegal aliens. I continued driving until the bureaucratic snafu was resolved but was extra wary because the local police cars have scanners that automatically search for scofflaws by reading all nearby license plates. During that illicit interlude, I once inadvertently pulled up behind a cop at a stoplight. I quickly scooted up within inches of his rear bumper so his scanner could not detect my license.

The two Fairfax cops finally returned and re-surrounded my car. I noticed that the cop who initially questioned me was not holding a ticket book or summons in his hand.

As he handed me back my license and registration, he said, “You need to be more careful when you’re driving.” This guy didn’t seem to be on a power trip. Actually, he seemed much more reasonable and decent than many of the cops I’ve encountered in Maryland or Washington, D.C.

After he signaled he was only giving me a warning, I was mighty tempted to ask him for directions to that donut store. But my sweet tooth could not compete with my appetite to end the police encounter ASAP. (A long-term Fairfax resident told me that No U-turn signs have massively proliferated in recent years — criminalizing behavior that was formerly considered nonthreatening.

As I drove to the hike, I saw another unmarked police car pulling over a young woman who looked far more innocuous than I. I was later told by a judge that the police that morning were probably propelled by a drug-interdiction grant that obliged them to pull over and interrogate a certain number of drivers. Similar federal grants have spurred controversies in Illinois, Vermont, and elsewhere owing to quotas for drunk-driving arrests.

The following month a New York City policeman choked 43- year-old Eric Garner to death after Garner was caught selling single cigarettes to passersby. That assault, which a medical examiner ruled a homicide, was captured on videotape and the policeman ignored Garner’s pleas about not being able to breathe. In August, controversy exploded after a Ferguson, Missouri, policeman shot and killed 18-year-old Michael Brown. The local police responded to the subsequent protests with such an array of military equipment and repressive tactics that even feckless moderates finally recognized that cops were off the leash.

After grand juries refused to indict either the Missouri or the New York cop for killing private citizens, the excessive power of law enforcement became a hot topic and protests spread nationwide. Attorney General Eric Holder declared in December that “we must seek to heal the breakdown in trust” between police and private citizens. Barack Obama created a Task Force on 21st Century Policing and announced that “we’re going to make sure that we’re not building a militarized culture inside our local law enforcement.” But in the prior five years, the Obama administration had given local law enforcement almost half a million pieces of military-grade equipment, including “92,442 small arms, 44,275 night-vision devices, 5,235 Humvees, 617 mine-resistant vehicles and 616 aircraft,” according to the Associated Press.

Obama also declared, “When anybody in this country is not being treated equally under the law that is a problem.” People listening to his speech might have thought he was referring to a tiff between Eskimos and the Canadian Royal Mounted Police in the far corner of the Yukon Territory — instead of to law-enforcement agencies he has happily funded since 2009.

But at the same time that Holder and Obama are supposedly gravely concerned about the honesty and openness of local policing, the feds continue to cover up a slew of killings by federal Border Patrol agents, as well as the FBI killing of 27-year-old Chechen Ibragim Todashev during questioning in his Florida apartment in 2013. And the feds are also continuing to suppress ample information about federal assaults in Waco, Texas, in 1993 that ended with more than 80 dead civilians.