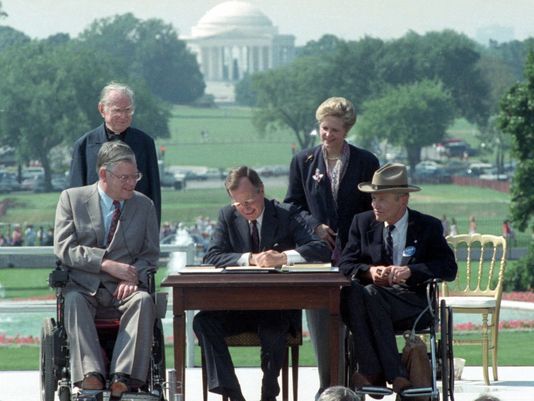 And it has actually been a disaster at helping the disabled find work.

Good intentions are no excuse for perpetual legal chaos. The Americans with Disabilities Act promised a bright new era of equality and freedom. Instead, it has spawned endless lawsuits and absurd federal decrees while harming some of the people it sought to relieve.
The 1990 ADA defined disability as “a physical or mental impairment that substantially limits one or more of the major life activities” — a far broader definition that what previously prevailed in the statute book. In 2008, Congress vastly expanded that definition to include people with diabetes, depression, heart disease, or cancer, as well as people who have significant troubles standing, lifting, bending, reading, concentrating, thinking and communicating.

The ADA is known as “attorney’s dreams answered” because it, and similar state laws modeled on  the law, have spurred hundreds of thousands of lawsuits, often for violations of arcane architectural standards. As early as 1995, one federal judge denounced an ADA case as “a blatant attempt to extort additional money” — something for which the law is now notorious. A California P.F. Chang’s restaurant was reportedly sued because the coat hook on the inside door of an accessible toilet stall was at an improper height. One convicted child molester in California has filed hundreds of cases. The New York Times reported in 2012 that the ADA had unleashed a “flood of lawsuits” against New York City delis, bagel shops, flower shops and other businesses that many people considered nothing more than “ambulance-chasing.”

President Obama declared last week that “thanks to the ADA, the places that comprise our shared American life — schools, workplaces, movie theaters, courthouses, buses, baseball stadiums, national parks — they truly belong to everyone.” But workplaces do not “belong to everyone” — they are mostly privately owned. Even so, the feds have often used the ADA to commandeer them.  For instance, the Justice Department dictated exactly how miniature golf courses must be configured and slanted for the ease of wheelchair users.

Many ADA decrees defy common sense. The Los Angeles Disabled Access Appeals Commission invoked the ADA to force the Odd Ball Cabaret, a strip joint, to close a shower stall on its stage.  The commission ruled that because the stall would not be accessible to a stripper in a wheelchair, the business discriminated against disabled women. It didn’t matter that there were no wheelchair-bound strippers.

Though many Americans initially supported the ADA to help people with severe physical handicaps, claims of mental, emotional and psychological handicaps have exploded thanks to the law. A federal court ruled in 2013 that anxiety over potentially getting fired qualifies as a sufficient disability — thus making terminating an underperforming teacher a violation of the ADA. An Ohio high school teacher claimed she was disabled by “pedophobia” (fear of children) and unable to accept reassignment at a middle school (a federal appeals court disagreed). Many colleges have been roiled by masses of students claiming to be disabled by little more than fear of hard work or bad grades.

The ADA has made it far more difficult for employers to deal with alcohol-abusing employees who could pose a threat to themselves, co-workers or customers.  An Oregon police officer who was fired after he crashed his car while intoxicated sued for $6 million in damages, claiming the ADA protected him because of his alcoholism. The ADA also spurred Northwest Airlines to rehire an airplane pilot who had been fired after being caught flying a passenger jet while legally drunk.

Obama declared, “The ADA offered millions of people the opportunity to earn a living and help support their families.” But the ADA has actually been a disaster at helping the disabled find work and become financially self-reliant. For all the legal battles and government action, the percentage of disabled people who are employed has hasn’t changed much since the ADA was enacted. A Massachusetts Institute of Technology study concluded that the ADA reduced employment of disabled men of all working ages and all disabled women younger than 40.

While the feds are twisting arms to try to boost disabled employment, federal disability payments under other laws subvert that goal by rewarding people with borderline conditions to stay out of the workforce and enjoy tax-free income. Obama’s Social Security Administration is more likely to considered Puerto Ricans disabled and, thus, entitled to disability payments if they lack English skills — even though most of the work on that island is conducted in Spanish, which, like English, is the official language there.

American attitudes toward the disabled have become far more compassionate, humane and rational in the past half-century. The ADA, by sowing so much unnecessary conflict, threatens this progress. It is time to admit that relying on a federal iron fist has subverted freedom and badly served America’s disabled.