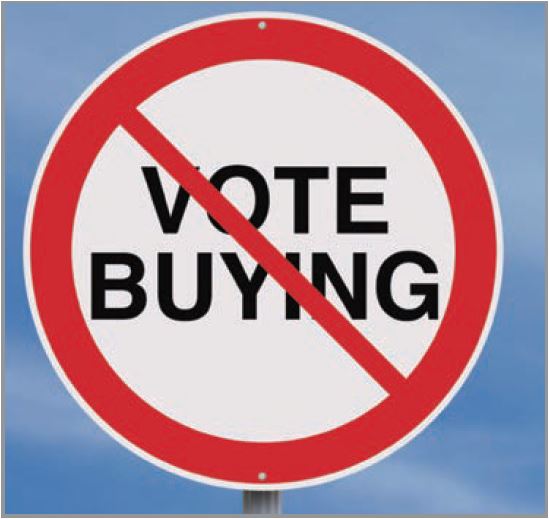 From the new issue of the Mises Institute  The Austrian newsletter Jan. 2016-

How Government Buys Your Support

In Iraq and Afghanistan, U.S. military officers routinely handed bundles of cash to local residents to buy influence and undermine resistance to the American occupation. Such payments came in especially handy after US troops inadvertently killed innocent civilians or sheep. Billions of dollars were shoveled out with little or no oversight as part of the Pentagon’s “Money as a Weapon System” program.

In the same way, politicians have long relied on money as a weapon system to buy votes or to undermine resistance to Washington. Presidents and congressmen are not carrying out a formal counterinsurgency against the American people. But they realize that addicting citizens to government handouts is the easiest way to breed mass docility and stretch their power.

Politicians are dividing Americans into two classes — those who work for a living and those who vote for a living. Federal food programs are now feeding more than 100 million Americans. Since 1983, the number of people receiving aid from the federal government has more than doubled — rising from 66 million to 153 million people. The number of people tapping means-tested handout programs has soared from 42 million to 109 million. Dependency has skyrocketed during an era of relative prosperity.

In the same way that King Henry VIII cemented his power by distributing seized monasteries to his supporters in the early 1500s, contemporary politicians buttress their power by showering hundreds of billions of dollars on likely voters. Like medieval kings who distributed land to any favored lackey, today’s politicians feel entitled to redistribute income to any group they please. Nowadays, there is no property title half as sacrosanct as a politician’s decree that some group deserves more handouts. But every new benefit program increases political control over recipients and over the people forced to finance the benefits.

Handouts provide cheap halos for politicians. Some people view government handouts as if they are nothing more than good intentions made manifest. But every government aid intervention shifts the incentives on how millions of people live. Federal student aid drove up college tuition which is helping spawn demands for federally-paid free tuition for all students. Medicaid and Medicare roiled the health care system and sparked perpetual inflation that spurs demands for nationalized health care. ObamaCare is spawning millions of new dependents who will view politicians as saviors in the coming years.

Politicians and bureaucrats strive to undermine traditional American virtues and maximize the number of people on the dole. The Agriculture Department is financing propaganda recruiting programs for food stamps. Recent reforms in most states allow people to snare food stamps merely by making a phone call or filling out an online application. That is far less bothersome than going to a job interview.

The Obama administration claims that the surge of food stamp dependency is making America prosperous because each dollar given in food stamps supposedly generates $1.84 in economic activity. If that was true, then government could make us all rich by giving food stamps to everyone. In reality, handouts are merely political multipliers.

Good faith government handouts are almost as rare as good faith wars. The welfare state buttresses itself with an array of statistical sleights intended to make citizens appear worse off than they are. USDA conducts an annual “food security” survey whose results are widely reported (including by Obama) as a proxy for the number of hungry Americans. If someone feared running out of food on a single day (but didn’t run out), that is an indicator of being “food insecure” for the entire year. If someone craved organic kale but could only afford conventional kale, that is another “food insecure” indicator. However, families receiving food stamps are over 50 percent more likely to be “food insecure” than similar low-income households not on food stamps, according to a Journal of Nutrition analysis. And “Food insecurity” was far more widespread in 2013 (14.3 percent of all households) than in 2007 (11.1 percent) even though the number of food-stamp recipients rose from 26 million to 47 million in the same period.

H.L. Mencken quipped that “every election is a sort of advanced auction of stolen goods.” The more politicians promise to some people, the more they entitle themselves to seize from everyone else. The federal government poached more than $3 trillion in taxes last year — largely to bankroll payments and services to its dependents.

Handouts tamper with elections as effectively as passing out hundred dollar bills at the polling booth. Unfortunately, using tax dollars to buy reelection is perfectly legal under federal campaign finance rules. And as long as government dependents are political assets, it is absurd to expect politicians to make reasonable or fair decisions on who gets what. Ironically, some of the politicians who want to effectively make work optional also want to make voting mandatory.

Politicians have a long history of pauperizing the public to perpetuate their power. Plutarch observed of the dying days of the Roman Republic, “The people were at that time extremely corrupted by the gifts of those who sought office, and most made a constant trade of selling their voices.” Montesquieu warned in 1748: “It is impossible to make great largesses to the people without great extortion: and to compass this, the state must be subverted. The greater the advantages citizens seem to derive from their liberty [of voting], the nearer they approach towards the critical moment of losing it.”

Politicians cannot undermine self-reliance without subverting self-government. The ultimate victim of handouts is democracy itself. The more important entitlement reform is to prohibit politicians from buying one person’s vote with another person’s paycheck.

James Bovard is the author of ten books, including 2012’s Public Policy Hooligan, and 2006’s Attention Decit Democracy. He has written for the New York Times, Wall Street Journal, Playboy, Washington Post, and many other publications.

FFF: The Failure of the Americans with Disabilities Act
YouTube: Busting the Feds on “An Economy of One”