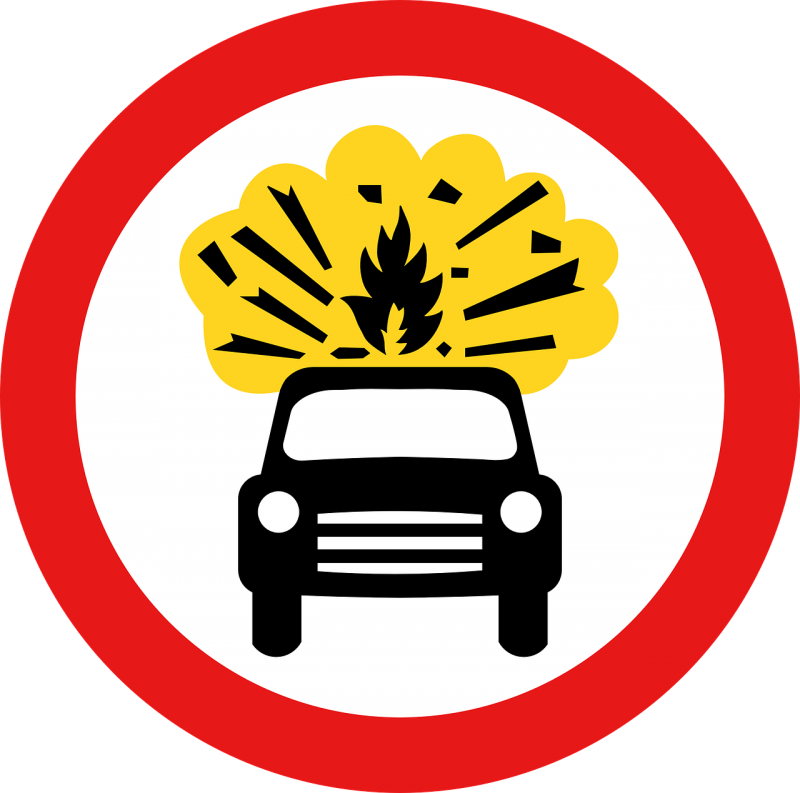 The Future of Freedom, November 2016

MY BLOWUP AT THE ENVIRO CHECKPOINT

As I sat in a seemingly endless line of cars at the Maryland vehicle-emissions check-point, the engine in my 1999 Ford suddenly growled, shuddered, and conked out cold. Maybe it was karma for my decades of scoffing at harebrained government regulations?

As I waited 90 minutes for a tow truck, I watched a stream of vehicles tarry up to half an hour to proceed through the Vehicle Emissions Inspection Program (VEIP) gauntlet. All my best profanity — and three kind offers of jump starts from passing Mexican drivers — did nothing to revive my engine.

Vehicle owners in 31 states must comply with similar tests, thanks to the Clean Air Act. States that displease the EPA, which dictates the compliance regulations, risk losing federal highway funds. The tests have been in the news lately thanks to Volkswagen’s software switcheroo that sent misleading signals when its diesel engines took government emission tests. But regardless of Volkswagen’s perfidy, do the tests, which began before revolutions in auto-engine designs, make any sense?

An EPA air-compliance inspector in Alaska admitted in 2012, “You’re just not finding a lot of dirty cars anymore.” A Colorado government audit recently concluded that the “public need” for its emission-testing regime was “uncertain” and recommended exempting all vehicles from model year 2001 onwards. (Maryland exempts only the two most recent model years.)

Improved technology by auto manufacturers has probably done a hundred times more to reduce environmental harm than government emission tests. According to University of Denver research engineer Gary Bishop, an emission inspection “costs lots of money” but “does absolutely nothing to clean up the air.” Bishop, who has pioneered new methods of roadside sensor tests, found that auto emissions in Tulsa, Oklahoma, which has no emission testing, were no worse than in locales with strict testing regimes. But bureaucrats enjoy testing regimes that accustom citizens to submitting to their commands — regardless of whether the commands are justified.

I have been jaded on these tests since 2008, when a VEIP employee briefly hooked up a gizmo to my car dashboard and then announced that my Contour failed. After receiving that verdict, I was directed to a “waiting room” where I had to listen to an inane tape blaring a recorded message: “Join the Revolution against Air Pollution!” That was supplemented by a garbled message about mixing benzene and other stuff: “You wouldn’t drink that if somebody gave it to you in a glass. So why are you breathing it?” I did not fully appreciate the government’s promotional efforts because my mind could not get past the question, “Why am I listening to this crap?” I looked around but could discover no evidence of a brain trust at the center of this regulatory regime.

I was notified by a low-watt government contractor that I had four months to get my Ford fixed or I would be banned from driving it — unless I spent at least $450 on repairs. I took my car to a mechanic at a nearby Shell station. He thoroughly examined it and then announced that he was mystified because the engine and everything else was running smooth and clean. Then he suggested that the check- engine light was the reason it failed. He made no repairs and charged me less than the usual fee for a VEIP failure exam because they found nothing. When I got re-tested, the attendant hooked up an apparatus to the tail pipe to measure actual emissions. My car passed with flying colors. If they had done the tailpipe test when I first took the exam, I would not have had a regulatory sword of Damocles hanging over my car for that summer.

Maryland, like many other states, has a massive, mandatory emission-testing regime that relies on the on-board diagnostic (OBD) system in car dashboards. Regulators presume an illuminated check-engine light proves that there is an emission violation. But there are plenty of reasons why the check-engine light would go on aside from excessive emissions — such as a loose wire, a faulty sensor, a computer glitch, or sheer cussedness. Relying on the check-engine light is akin to the Transportation Security Agency’s condemning any traveler who has a container with more than four ounces of liquid in his carry-on baggage. Actually, the check-engine light is more akin to TSA’s banning people from flying because they are not wearing matching socks. The OBD tests are notorious for generating false alarms. When Ontario switched in 2013 from measuring tailpipe emissions to checking OBD readings, the percentage of vehicles that failed the tests soared by 60 percent.

VEIP is my biannual regulatory dodgeball game. When I received my VEIP summons in April, my check-engine light was on — as it has been for much of the past decade. I delayed getting tested, hoping the light would switch off — as it does periodically. Then Maryland warned that it would cancel my vehicle registration unless I got VEIPed within 30 days. I took my car onto the Interstate and drove it harder, faster, and further than usual to get the check-engine light to switch off. It worked — at least until my fuel pump gave up the ghost in the testing line. After spending $837 for a new fuel pump and for the $29 inspection fee (including a $15 late charge), my Ford received another two-year reprieve from bureaucratic damnation.

Some folks who heard of my experience tutted that it proves that I should buy a newer car. But I usually drive fewer than 5,000 miles a year; I work at home, live near a subway stop, and enjoy biking more than driving. For long road trips, I rent cars. Some people may presume that manufacturing new cars is environmentally neutral as long as the check-engine light does not go on. But unnecessarily squandering resources and money is a nitwit response to bogus dashboard alerts. Regardless, Maryland bureaucrats would be happier with someone’s unnecessarily buying a new car than with driving a vehicle with an illuminated check-engine light.

Emissions tests are also irksome because federal, state, and local policies cause far more air pollution than VEIP deters. Driving to the VEIP site, I had ample opportunity to cuss the pointless delays on the county’s main six-lane business corridor. Red lights are one of the biggest sources of air pollution around. But Montgomery County is raking in $4 million a year in fines from red-light cameras, a strong deterrent to synchronizing the lights.

Maryland drivers are compelled to rely on fuel with 10 percent ethanol. Maryland has some of the worst smog problems in the nation and ethanol is notorious for increasing smog — especially in the summer. The Wisconsin Department of Natural Resources estimated that adding ethanol to gasoline does twice as much harm to air quality as auto-emission testing prevents. But the farm lobby is sufficiently powerful that politicians take drivers hostage every time they fill up their gas tank. Ethanol is also renowned for damaging car engines. But that has not deterred Barack Obama from seeking to force Americans to use more of it — raising the fuel blend from 10 percent to 15 percent ethanol.

Maryland whoops up the VEIP tests as if they are a silver bullet for the state’s air quality. Maybe my skepticism was unjustified — maybe the government actually had great data to prove that it is all worthwhile. So I sent an email to the press office of the Maryland Department of Environment asking whether they had an “estimate of exactly how much MD VEIP tests have reduced pollution in the state.” I also asked, “Is there an estimate on the reduction from repairs etc. from vehicles that initially failed VEIP tests?” Jay Apperson, the deputy director of the MDE Office of Communications, promptly replied: “Just wanted to let you know that I got your email, will check. Thanks.”

Then I heard nothing for ten days. So I sent another email to the same office with two more questions: “Does the MD Dept of Env. have an estimate of the total amount of pollutants discharged by vehicles participating in the VEIP process? I assume this would be calculated by an estimate of the average # of miles driven to VEIP stations and the # of minutes awaiting the test. Has the MD Dept of Env. done any studies or estimates of the impact of ethanol in gasoline on MD air quality — especially as far as smog in the summer?” Apperson replied: “I am still tracking down answers to your questions. We will also look into your additional questions.”

Alas, though I sat on the edge of my chair for the following weeks, I heard nary a word from the Maryland Department of the Environment. But, considering the half-hour wait that many drivers have for the emission tests, the tests themselves could be a net negative for Maryland air quality.

Anyone who scorns a VEIP summons runs into another government buzzsaw. Maryland leads the nation in surveillance of its citizens — or at least its drivers. Under Gov. Martin O’Malley, the state snared federal Homeland Security grants to equip hundreds of police cars with license-plate scanners that create almost 100 million records per year detailing exactly where and when each vehicle travels. The massive databank, which mortifies the ACLU, has been almost a total failure at nailing violent criminals or car thieves or terrorists. Instead, almost all the license-plate alerts involve VEIP scofflaws. Maryland police have a tawdry record of illegal surveillance on anti-war protesters.

Unfortunately, Maryland’s license-plate scanners are unable to detect regulatory boondoggles. Will EPA or the state’s politicians admit the futility of emission testing before my old Ford receives another VEIP summons in 2018? Regardless of how much pollution government policies cause, bureaucrats are still entitled to unlimited power over drivers who might — or might not — inflict environmental harm.

++ Thanks to the folks at Pixabay for the copyright-free image posted above.

2 Responses to FFF: My Blowup at the Enviro Checkpoint