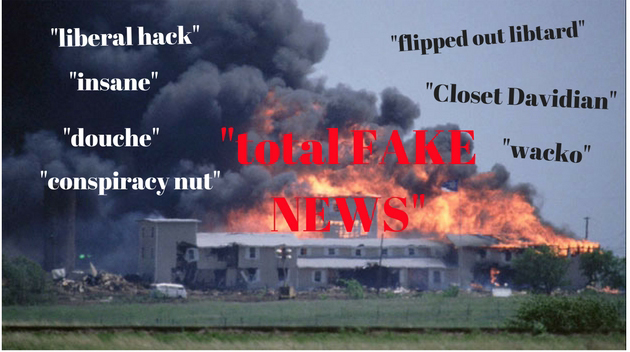 After White House spokesman Sean Spicer said on Tuesday that no one had used chemical weapons since World War One, I tweeted a reminder that the U.S. government used chemical weapons at Waco.  Lots of folks kindly retweeted my line, including Ann Coulter (who has more than a million followers.) Many Twitter users were outraged at that recollection. Following are some of the testy responses –

USATODAY contributor means liberal hack who supports lies of O'Bama administration. Makes one wonder who is working with Russia. https://t.co/kgjgSLwaCk

@JimBovard Since when is CS a chemical weapon? Oh right, forgot your a flipped out LibTard who still can't come to terms with Killery Hillary loosing!!

@JimBovard @AnnCoulter Baseless and not well thought out. CS gas is not deadly and it was the igniter not the gas that started the fire. Closet Dravidian?

@JimBovard @alcardfan I followed Waco mess- They did NOT use WMD. You comparing this is insane

@OrangeFiction @JimBovard Idiots. The US didn't use chemical weapons in Waco. There are no black helicopters or detention camps. Idiocy!

Ok @AnnCoulter that's just not true. You are twisting facts. And please don't come back with symantecs, cause it still ain't true. https://t.co/saomynWEHa

@JimBovard @IntelliJennce What a bunch of crap. Gets real dude

@JimBovard @AnnCoulter WACO for wackos. Ann kind of think you are finished.@realDonaldTrump

David lunatic Koresh set it on fire & was & is totally responsible for the deaths of his misguided followers https://t.co/K7YzYqCRJJ