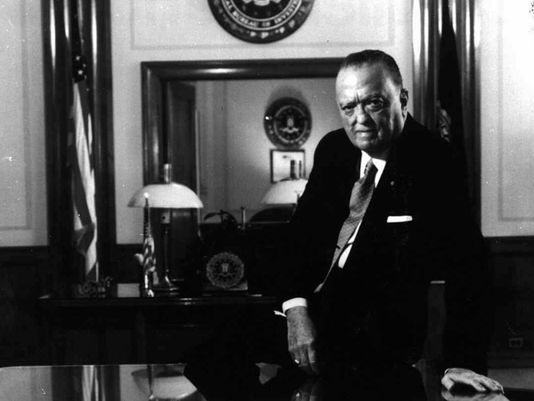 It’s a historically untrustworthy secret organization that needs to live under rule of law.

President Trump’s firing of FBI chief James Comey provides a welcome chance to dethrone the FBI from its pinnacle in American politics and life. Last September, Comey denounced Twitter “demagoguery” for the widespread belief that the FBI was not “honest” or “competent.”

But the FBI has a long record of both deceit and incompetence. Five years ago, Americans learned that the FBI was teaching its agents that the bureau “has the ability to bend or suspend the law to impinge on the freedom of others.” This has practically been the FBI’s motif since its creation.

J. Edgar Hoover, who ran the FBI from 1924 until his death in 1972, built a revered agency that utterly intimidated official Washington. In 1945, President Truman wrote: “We want no Gestapo or secret police. FBI is tending in that direction. … This must stop.” But the bureau’s power soared after Congress passed the Internal Security Act of 1950, authorizing massive crackdowns on suspected subversives. Hoover compiled a list of more than 20,000 “potentially or actually dangerous” Americans who could be seized and locked away at the president’s command. “Congress secretly financed the creation of six of these (detention) camps in the 1950s,” noted Tim Weiner in his excellent 2012 book, Enemies: A History of the FBI.

From 1956 through 1971, the FBI’s COINTELPRO (counterintelligence programs) conducted thousands of covert operations to incite street warfare between violent groups, to get people fired, to smear innocent people by portraying them as government informants, and to cripple or destroy left-wing, black, communist, white racist and anti-war organizations. FBI agents also busied themselves forging “poison pen” letters to wreck activists’ marriages. COINTELPRO was exposed only after a handful of activists burglarized an FBI office in a Philadelphia suburb, seized FBI files, and leaked the damning documents to journalists.

FBI haughtiness was on display on April 19, 1993, when its agents used armored vehicles to smash into the Branch Davidians’ sprawling, ramshackle home near Waco, Texas. The tanks intentionally collapsed much of the building on top of the huddled residents. After the FBI pumped the building full of CS gas (banned for use on enemy soldiers by the Chemical Weapons Convention), a fire ignited that left 80 children, women and men dead. The FBI swore it was blameless for the conflagration, but six years later, an investigation revealed that the FBI fired incendiary cartridges into the building before the blaze erupting. No FBI agents were penalized or prosecuted for their fatal assault against American civilians.

Before the 9/11 attacks, the FBI dismally failed to connect the dots on suspicious foreigners engaged in domestic aviation training. Though Congress had deluged the FBI with $1.7 billion to upgrade its computers, many FBI agents had old machines incapable of searching the Web or emailing photos. One FBI agent observed that the bureau ethos is that “real men don’t type. … The computer revolution just passed us by.”

The FBI’s pre-9/11 blunders “contributed to the United States becoming, in effect, a sanctuary for radical terrorists,” according to a 2002 congressional investigation. (The FBI also lost track of a key informant at the heart of the cabal that detonated a truck bomb beneath the World Trade Center in 1993.)

In the late 1990s, the FBI Academy taught agents that subjects of investigations “have forfeited their right to the truth.” This doctrine helped fuel pervasive entrapment operations after 9/11. Trevor Aaronson, author of The Terror Factory: Inside the FBI’s Manufactured War on Terrorism, estimated that only about 1% of the 500 people charged with international terrorism offenses in the decade after 9/11 were bona fide threats. Thirty times as many were induced by the FBI to behave in ways that prompted their arrest. The bureau’s informant program extends far beyond Muslims. It bankrolled an extremist right-wing New Jersey blogger and radio host for five years before his 2009 arrest for threatening federal judges.

The FBI’s power has rarely been effectively curbed by either Congress or federal courts. In 1971, House Majority Leader Hale Boggs declared that the bureau’s power terrified Capitol Hill: “Our very fear of speaking out (against the FBI) has watered the roots and hastened the growth of a vine of tyranny. … Our society … cannot survive a planned and programmed fear of its own government bureaus and agencies.”

Boggs vindicated a 1924 American Civil Liberties Union report warning that the FBI had become “a secret police system of a political character” — a charge that supporters of both Hillary Clinton and Donald Trump would have alternatively cheered last year.

If Trump fired Comey to throttle an investigation into Trump administration criminality, that is an impeachable offense. Otherwise, Comey’s fall provides an excellent opportunity to take the FBI off its pedestal and place it where it belongs — under the law.

It is time to cease venerating a federal agency whose abuses have perennially menaced Americans’ constitutional rights.

UPDATE: Here’s a jpeg from this piece –

12 Responses to USA Today: Time to Dethrone the FBI