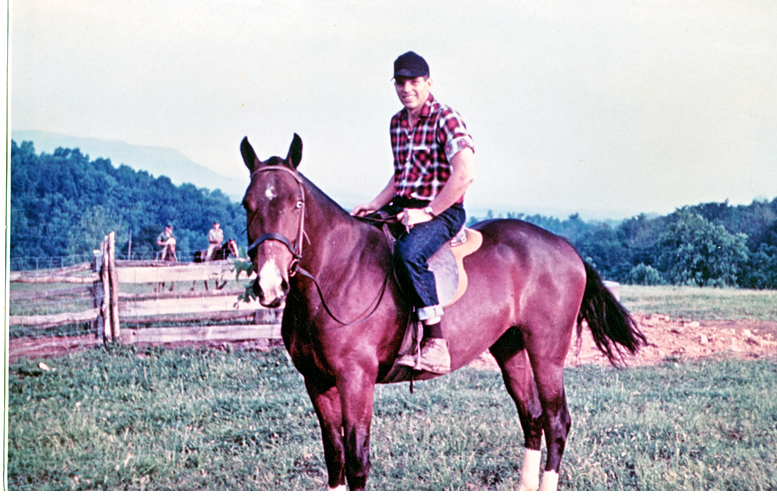 I was sorting through the clutter on a kitchen desk this morning and stumbled across the letter reposted below.  I wrote this shortly after my father had been diagnosed with the leukemia that would finish him off the following February.  This was the kind of letter that it is easy to put off writing – but I sensed a deadline.  The photo to the left was one of his favorite portraits, taken while he worked as a geneticist at a beef cattle research station in the mountains of Virginia.  As I noted in the letter, sometimes it was not clear what I inherited in my gene pool versus what I learned from him over the decades.

I wanted to take the chance to wish you a very special and very happy Father’s Day.

Since May 20, I have thought many times about what a great father you are and have been. You did more things to help me in my early years than I will ever know.

Your good spirits and optimism have been a gift that continues to pay dividends for me in my daily life. Many people have asked where I get my optimism and resilience from – and I tell them that certainly a fair amount of it was inherited and/or acquired from you. You also pointed out some excellent books to me when I was an adolescent, some of which I still peruse. These attitudes have been invaluable in sailing through the inevitable ups-and-downs of a freelance life.

I appreciate the time you invested and the sacrifices you made for Troop 52. Being a Boy Scout taught me a lot about the value of flexibility and marching on despite the cold, the rain, and the occasional Dutch Oven lashed to the back of my knapsack. Your high spirits and songs during the most inclement weather set a great example for me and many other boys. Learning how physical hardship could be ignored and overcome is a lesson that is worth more than words can say. The trip to the Idaho Jamboree in 1969 – which I took with encouragement from you – was an eye-opener that helped breed a hunger to discover what lay beyond the boundaries of Warren County. Likewise for some of your trips to Richmond and Washington that I tagged along on in the late 1960s and 1970s – I learned to enjoy roaming city streets and seeing what was around the next corner.

I also benefited from exposure both to your sense of humor and to Mom’s (good to have a mixed dosage). Your old saying, “It takes little to amuse the simple” – is still one of my favorites. Laughter is one of the great things in life and I appreciate growing up in a home in which joking (even on Sundays) was not a violation of decorum. And even something as simple as being allowed to read Playboy magazine when I was growing up helped shape my sense of humor, etc.

And I have greatly appreciated your feedback on my work over the last 20 years. I am still surprised at how many grammar errors and other glitches that you catch in the final versions of my last two books that teams of copy editors from St. Martin’s Press and I missed. It is also most helpful to hear from you when you think a article or sentence has hit home.

You also gave me some very helpful ideas on how to read a book – i.e., to mark the hell out of it and not treat books like something that should be locked away in a mausoleum. I have been struck in visiting some people’s houses how they keep their books all neatly-arranged in spotless covers on their bookshelves. Looks nice but doesn’t do a lick of good for their brains. The habit of heavily annotating what I have read is invaluable – especially 10 or 20 years later when I go back to a book and try to fetch out the best ideas.

I have been constantly impressed by your courage and cheerfulness in recent weeks. You are setting an example that I will not forget.

Have a great Father’s Day!