Donald Trump is reckless on Syria. It’s his most dangerous foreign policy folly.

Last year on the campaign trail, crowds roared when Donald Trump denounced his opponent as “trigger-happy” Hillary. But President Trump is rapidly incarnating the vice he condemned. Nowhere is this more evident than in Syria, where Trump’s recklessness risks dragging America into a major war.

U.S. policy toward Syria has been a tangle of absurdities since 2012. President Obama promised 16 times that he would never put U.S. “boots on the ground” in the four-sided Syrian civil war. He quietly abandoned that pledge and, starting in 2014, launched more more than 5,000 airstrikes that dropped more than 15,000 bombs on terrorist groups in Syria.

Four years ago, Trump warned in a tweet: “If the U.S. attacks Syria and hits the wrong targets, killing civilians, there will be worldwide hell to pay.” But the Trump administration has sharply increased U.S. bombing while curtailing restrictions that sought to protect innocents. A British-based human rights monitoring group estimated Friday that U.S.-led coalition strikes had killed almost 500 civilians in the past month — more than any month since U.S. bombing began. A United Nations commission of inquiry concluded that coalition airstrikes have caused a “staggering loss of civilian life.”

The carnage is sufficiently embarrassing that “the Pentagon will no longer acknowledge when its own aircraft are responsible for civilian casualty incidents,” Micah Zenko of the Council of Foreign Relations recently noted.

U.S.-led forces are reportedly bombarding the besieged city of Raqqa with white phosphorous, a munition that burns intensely and is prohibited by international law from use against civilians. Deploying white phosphorous to attack Raqqa could be a war crime, Amnesty International warns.

Trump’s most dangerous innovation involves direct attacks on Syrian government forces, including last week’s shootdown of a Syrian jet fighter. The Russian government, which is backing Syrian President Bashar Assad, responded by threatening to shoot down any aircraft over much of Syria.

After the Syrian government was accused of killing at least 70 civilians with sarin gas in April, Trump speedily ordered the launch of 59 cruise missiles against a Syrian military airfield. Much of the American news media hailed the Syrian missile attack as Trump’s finest hour. When he gave the commencement address at Liberty University in May, the audience cheered when Trump was introduced as the man who “bombed those in the Middle East who were persecuting and killing Christians.” But America could pay a harsh price for Trump’s “virtue signalling” with bombs and missiles.

The biggest delusion driving U.S. policy is the quest for viable “moderate rebels” — which apparently means groups who oppose Assad but refrain from making grisly videos of beheadings. America has spent billions aiding and training Syrian forces who either quickly collapsed on the battlefield or teamed up with the Islamic State of Iraq and Syria, or al-Qaeda-linked forces. Policy is so muddled that Pentagon-backed Syrian rebels have openly battled CIA-backed rebels.

The United States has armed and aided al-Qaeda-linked groups in Syria despite federal law prohibiting providing material support to terrorist groups. A prominent Assad opponent who organized a conference of anti-Assad groups financed by the CIA was recently denied political asylum. The Department of Homeland Security notified Radwan Ziadeh that because he provided “material support” to the Free Syrian Army, he has “engaged in terrorist activity.”

By the same standard, thousands of CIA, State Department, Pentagon and White House officials should be jailed. Rep. Tulsi Gabbard, D-Hawaii, has introduced The Stop Arming Terrorists Act to prohibit any funding, support or weapons for al-Qaeda, ISIS and allied terrorist groups.

Every side in the Syrian conflict has committed atrocities, often with approval of their foreign patrons. Former CIA officer Phil Giraldi observed, “The Saudis, Qataris, Turks and Israelis are all currently (or have been recently) in bed with terrorist groups (in Syria) that the United States is pledged to destroy.” The Wall Street Journal reported this month that “Israel has been regularly supplying Syrian rebels near its border with cash as well as food, fuel and medical supplies for years.”

The Syrian government has never threatened the United States, and Congress has not approved attacking it. White House spokesman Sean Spicer justified Trump’s cruise missile attack because “when it’s in the national interest of the country, the president has the full authority to act.” But this is a recipe for unlimited power — warring limited solely by self-serving presidential proclamations.

Sen. Tim Kaine, D-Va., condemned Trump’s attacks on Syrian government forces as “unconstitutional” and a “completely unlawful use of power.” Sen. Rand Paul, R-Ky., concurs: “This is illegal war at this point.”

Killing vast numbers of innocent civilians sows the seeds of future terrorist attacks on America. There are no good options for continuing U.S. intervention in Syria. The only question is whether Trump’s blundering will turn that war into a catastrophe for Americans as well as Syrians. As Trump tweeted about Obama’s Syria policy in 2013: “Be prepared, there is a small chance that our horrendous leadership could unknowingly lead us into World War III.” 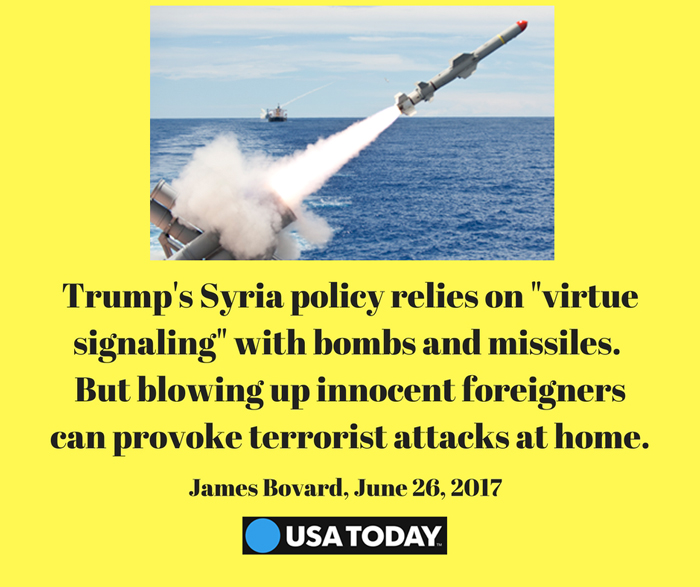 Thanks to Canva.com for the layout of the quote jpegs 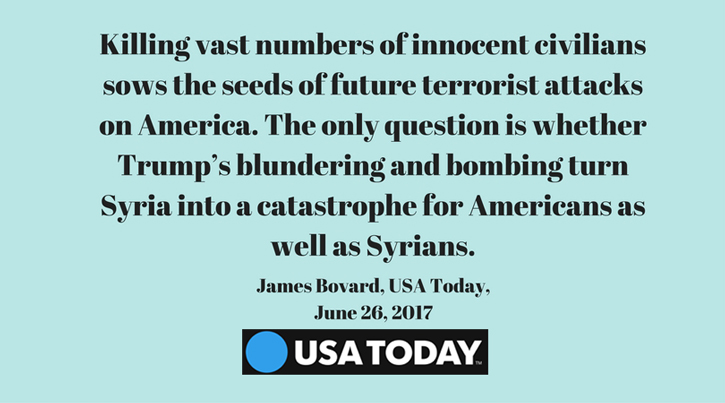 My Last Father’s Day Letter (2001)
Standards for Bombing Vs. Jay-walking