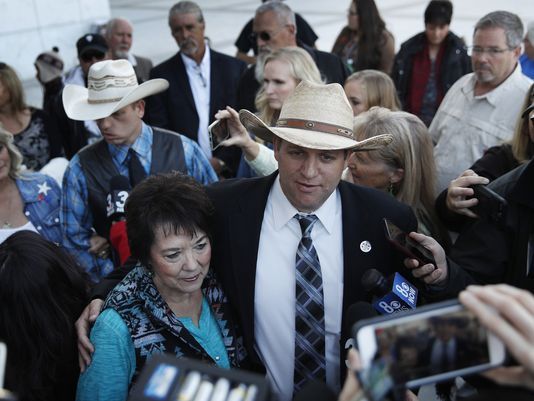 Cliven Bundy-FBI debacle: Another example of why the feds need to be leashed

The FBI’s sordid history of withholding and destroying key evidence deserves a reckoning.

The Justice Department was caught in another high-profile travesty last month that continues to reverberate through the western states. On Dec. 20, federal judge Gloria Navarro declared a mistrial in the case against Nevada rancher Cliven Bundy and others after prosecutors were caught withholding massive amounts of evidence undermining federal charges. This is the latest in a long series of federal law enforcement debacles that have spurred vast distrust of Washington.

Bundy, a 71-year old Nevadan rancher, and his sons and supporters were involved in an armed standoff with the Bureau of Land Management (BLM) beginning in 2014 stemming from decades of unpaid cattle grazing fees and restrictions. The Bundys have long claimed the feds were on a vendetta against them, and 3,300 pages of documents the Justice Department wrongfully concealed from their lawyers provides smoking guns that buttress their case.

A whistleblowing memo by BLM chief investigator Larry Wooten charges that BLM chose “the most intrusive, oppressive, large scale and militaristic trespass cattle (seizure) possible” against Bundy. He also cited a “widespread pattern of bad judgment, lack of discipline, incredible bias, unprofessionalism and misconduct, as well as likely policy, ethical and legal violations” by BLM officials in the case. BLM agents even “bragged about roughing up Dave Bundy, grinding his face into the ground and Dave Bundy having little bits of gravel stuck in his face” while he was videotaping federal agents. Wooten also stated that anti-Mormon prejudice pervaded BLM’s crackdown.

The feds charged the Bundys with conspiracy in large part because the ranchers summoned militia to defend them after they claimed that FBI snipers had surrounded their ranch. Justice Department lawyers scoffed at this claim in prior trials involving the standoff but newly-released documents confirm that snipers were in place prior to the Bundy’s call for help.

The feds also belatedly turned over multiple threat assessments which revealed that the Bundys were not violent or dangerous, including an FBI analysis that concluded that BLM  was “trying to provoke a conflict” with the Bundys. As an analysis in the left-leaning Intercept observed, federal missteps in this case “fueled longstanding perceptions among the right-wing groups and militias that the federal government is an underhanded institution that will stop at nothing to crush the little guy and cover up its own misdeeds.”

Judge Navarro will hold a hearing on Jan. 8 on whether to dismiss all charges or require a new trial. But federal prosecutors have insisted that, regardless of the latest disclosures, the judge should prohibit the Bundys from claiming the feds provoked the confrontation or that the Bundys acted in self-defense. Steven Myrhe, the lead federal attorney, declared: “The Court needs to put a stop to these illegal theories and defenses in order for the government to receive a fair trial. The government, too, is entitled to a fair trial.”

But fair trials are the last thing that high-profile federal targets such as the Bundys are likely to receive.  In the early 1990s, the federal government decided to take down Randy Weaver, an outspoken white separatist living on a mountaintop in northern Idaho.  After Weaver was entrapped by a federal agent, U.S. Marshals trespassed on Weaver’s land and killed his son. The Justice Department claimed that Weaver conspired to have an armed confrontation with the government. Bizarrely, the feds claimed that his moving from Iowa to near the Canadian border in 1983 was part of that plot. After a jury found Weaver not guilty on all major charges, federal Judge Edward Lodge issued a lengthy catalog of the Justice Department’s and FBI’s misconduct and fabrication of evidence in the case. A top FBI official was later sent to prison for destroying key evidence in the case.

The Justice Department also did the conspiracy/suppression of evidence two-step against the Branch Davidians in Waco. A grand jury indictment accused 11 Davidians who survived 1993 federal assaults on their home of conspiring “with malice aforethought” to kill Alcohol Tobacco and Firearms agents. The ATF’s decision to launch a frontal attack on their home somehow proved that the residents sought an “armed confrontation.” Prosecutors compared Davidian leader David Koresh to Hitler and Stalin and denounced defendants as “religious terrorists.” But a jury rejected the most serious charges against the Davidian defendants, which the New York Times characterized as a “stunning defeat” for the federal government. Five years later, Americans learned that, contrary to Justice Department assertions, FBI attackers fired pyrotechnic grenades into the Davidians’ property before a massive fire erupted that left 80 people dead.

In the Bundy case, Judge Navarro slammed the FBI for withholding key evidence.  Unfortunately, this seems to be standard procedure for the FBI — including in their investigations of both the Donald Trump and Hillary Clinton presidential campaigns as well as the Las Vegas shooter who slaughtered concert goers last October. FBI officials have also been caught routinely twisting the truth to burnish prosecutions. False FBI trial testimony may have helped sentence 32 innocent people to death, as the Washington Post reported in 2015. How many other innocent people have been put behind bars because of federal misconduct?

Attorney General Jeff Sessions is ordering a formal investigation into how the Justice Department went awry in Nevada. Until the feds cease wrongfully abusing their targets, there will be no rebound in trust in Washington. If the Trump administration cannot rein in renegade federal prosecutors, the president should cease-and-desist any and all claptrap about “draining the swamp.”