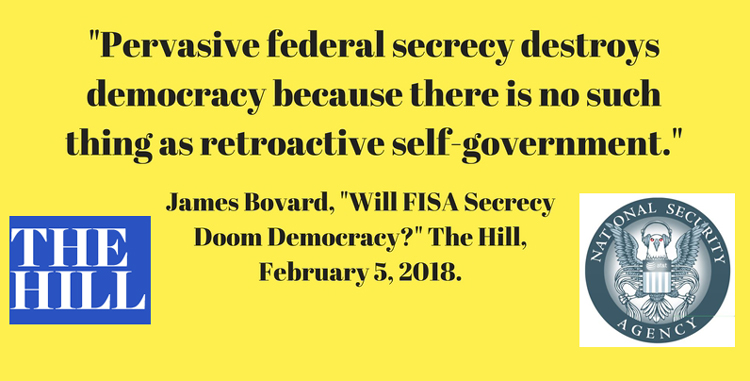 “Democracy Dies in the Darkness” is the proud motto of the Washington Post. But, considering the past week’s frenzy, the new motto for much of the media and many Democrats is, “Disclosure is the Death of Democracy.” Unfortunately, the uproar around the release of the Nunes memo totally missed the deadly political peril posed by pervasive federal secrecy.

Shortly before the memo became public, President Trump tweeted that “the top Leadership and Investigators of the FBI and the Justice Department have politicized the sacred investigative process.” But any “sacred investigative process” exists only in the imaginations of pro-government pundits and high school civics textbooks. The FBI and Justice Department have a century-long history of skewering targets to gratify their political masters, while the FISA court routinely heaves buckets of judicial hogwash to countenance the wholesale destruction of Americans’ constitutional rights. 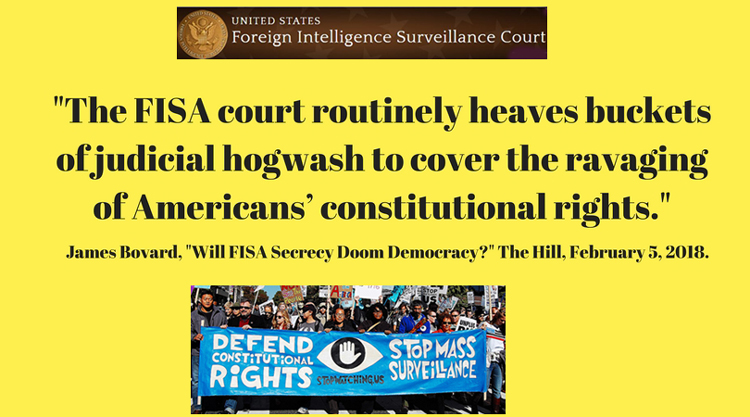 Former FBI agent Asha Rangappa, writing in the New York Times, labeled the Nunes memo a “shame” and urged Americans to presume that “most government servants are ultimately acting in good faith and within the constraints of the law.” But blindly relying on positive thinking is a recipe for political servitude. The FISA court has been a fount of outrages because it is an American Star Chamber: the court meets in secret, only hears the government’s side, and approves 99 percent+ of all the search warrants requested.

Much of the backlash against the memo’s release portrayed the FBI as a FISA Vestal Virgin. The FBI issued with a grim statement: “We are committed to working with the appropriate oversight entities to ensure the continuing integrity of the FISA process.” Former FBI chief James Comey tweeted that the Nunes memo “wrecked the House intel committee, destroyed trust with Intelligence Community, damaged relationship with FISA court.”

But for more than a decade, the FISA court has repeatedly complained about deceptive FBI agents seeking turbo-charged secret FISA warrants. In 2002, the court revealed that FBI agents had false or misleading claims in 75 cases. In 2005, FISA chief judge Colleen Kollar-Kotelly proposed requiring FBI agents to swear to the accuracy of the information they presented; that never happened because it could have “slowed such investigations drastically,” the Washington Post reported. So FBI agents continued to have a license to exploit FISA secrecy to lie to the judges.

Syracuse University law school professor William Banks asserted, “I can’t recall any instance in 40 years when there’s been a partisan leaning of a FISA court judge when their opinions have been released.”  But this is only because, inside the Beltway, being pro-Leviathan is pragmatic, not partisan. The FISA court has repeatedly presumed that if the feds violate everyone’s privacy, they violate no one’s privacy -— so there is no constitutional problem.

In 2006, the FISA court signed off on effectively treating all Americans as terrorist suspects. The court swallowed the Bush administration’s lawyers’ bizarre interpretation of the Patriot Act, claiming that the telephone records of all Americans were “relevant” to a terrorist investigation.

In 2009, the FISA court upheld surveillance based on a 2007 law that effectively decreed that any American who exchanged emails or phone calls with foreigners forfeited their right to privacy.  A FISA Appeals Court decision dismissed concerns because the government had “instituted several layers of serviceable safeguards to protect individuals against unwarranted harms” — so anyone whose privacy was zapped had no right to complain.

The FISA court is only the tip of the iceberg of the omnipresent secrecy now shrouding government action. The federal government made almost 80 million decisions to classify documents in 2014. James Madison, the father of the Constitution, declared in 1798 that “the right of freely examining public characters and measures … has ever been justly deemed, the only effectual guardian of every other right.” But Americans have less of that right with each passing decade. 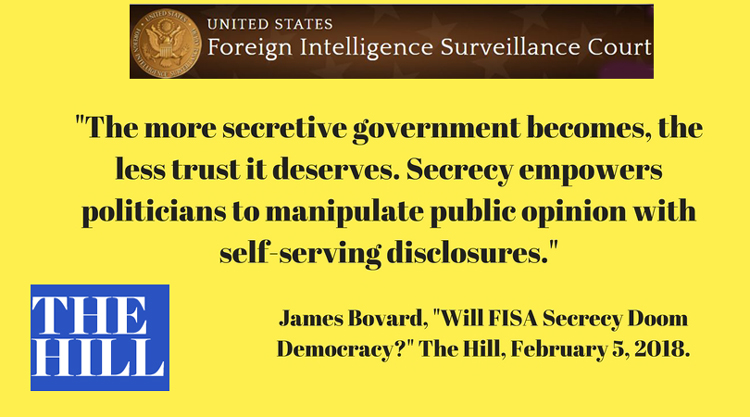 The more secretive government becomes, the less trust it deserves. Secrecy empowers politicians to manipulate public opinion with self-serving disclosures. The same 2002 federal appeals court which provided the Washington Post’s motto also warned: “When government begins closing doors, it selectively controls information rightfully belonging to the people. Selective information is misinformation.” This is what Democrats assert that Republicans did with the Nunes memo — and this is what Judicial Watch claims a federal judge is doing by refusing to release James Comey’s memos on his conversations with President Trump (even though Comey already leaked some of them to the press).

Excessive secrecy could have swung three of the last four presidential elections. The New York Times learned of the Bush administration’s massive illegal wiretapping program prior to the 2004 election but refrained from disclosing it until late 2005; John Kerry might have won in 2004 if voters had known of Bush’s constitutional demolition. If Edward Snowden had released his bombshells about Orwellian illegal spying and data seizures by the Obama administration in October 2012 (instead of 2013), Mitt Romney might have won that November. The 2016 election could have been swung in Hillary Clinton’s favor thanks to the State Department’s illegal refusal to release her emails; State Dept. bureaucrats claimed they would need 75 years to fulfill a request for Clinton’s aides emails.

There is no such thing as retroactive self-government. Both parties must partner to drain the secrecy swamp, especially regarding information on allegations about the Trump 2016 campaign. If the Democrats are savvy, they will do everything possible to assure that excessive secrecy does not swing the 2020 election in Trump’s favor.