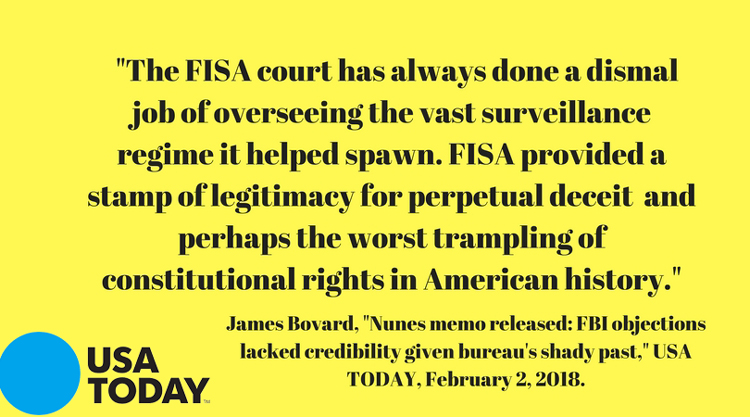 The Foreign Intelligence Surveillance Act is once again at the center of a political scandal. President Trump claims the FISA court wrongfully approved secret spying on his 2016 presidential campaign, while prominent Democrats claim Republicans are guilty of treason if they release a memo alleging FISA abuses by the FBI, a move the president has now approved. Regardless of the merits of this particular clash, FISA has long been a disaster for Americans’ constitutional rights.

Congress passed the Foreign Intelligence Surveillance Act in 1978 after scandals related to Nixon administration illegal wiretaps. Under FISA, the government need only show only that a person is suspected of being an agent of a foreign power or terrorist organization to get a search warrant. This is a much lower standard than under criminal law because, unlike foreign agents, Americans’ rights are protected (at least on paper) by the Fourth Amendment which prohibits warrantless unreasonable searches.

FISA surveillance orders tend to be far more expansive than normal federal criminal searches. The secret FISA court noted that, after it grants a request, “the FBI will be authorized to conduct, simultaneous telephone, microphone, cell phone, e-mail and computer surveillance of the U.S. person target’s home, workplace and vehicles. Similar breadth is accorded the FBI in physical searches of the target’s residence, office, vehicles, computer, safe deposit box and U.S. mails.”  People surveilled under  FISA orders rarely learn the feds have been intruding unless they are arrested as a result.

The FISA court grants 99%+ of all requests for warrants and only hears from one side of each case, the governments. As a result, its proceedings have been plagued by falsehoods. In 2002, The FISA court complained that FBI agents made more than 75 false or misleading claims to secure warrants; a top FBI counterrorism official was prohibited from ever appearing there again.  The court also rebuffed Attorney General John Ashcroft’s proposal to  radically transform its purpose by making it easier for prosecutors to use FISA warrants to sweep up evidence for criminal prosecutions.

The Bush administration took the case to a specially-created FISA Appeals court which unanimously granted Ashcroft’s wish and ignored the problem of deceptive federal agents. “Having found that the fox has eaten half the chickens, the court has decided that the fox should have more authority over the chicken coop,” groused Joshua Dratel, chairman of the National Association of Criminal Defense Lawyers.  A transcript revealed that the FISA appeals “judges generally assumed a servile posture toward the executive branch, even consulting the Justice Department on how to handle its critics,” according to Secrecy News.

After 9/11, the Bush administration got approval for far more sweeping FISA searches but went even further. Bush’s lawyers insisted the president had inherent authority to order wiretaps – regardless of a 1972 Supreme Court decision obliterating that dictatorial notion. During his 2004 reelection campaign, Bush assured audiences that the federal government was not wiretapping Americans without a warrant. But the New York Times revealed in December 2005 that the National Security Agency was conducting up to 500 warrantless wiretaps inside the U.S. at a time.

Six months later, USA Today revealed that the NSA was tracking the calls of tens of millions of Americans and constructing the “largest database ever assembled in the world.” The story provoked an uproar and the Bush legal team  raced to the friendly neighborhood FISA court.   FISA judges accepted a bizarre assertion that the telephone records of all Americans were “relevant” to a terrorism investigation under the Patriot Act. Thus, the feds were entitled to secretly compel telephone companies to deliver all their calling records (including time, duration, and location of calls) to the National Security Agency.

In the summer of 2007, the Bush administration railroaded FISA amendments known as the “Protect America Act” through Congress which authorized surveillance of any phone call or email by any Americans which the government “reasonably believed” was contacting someone – anyone – outside the U.S. After a telephone service provider challenged that law, a FISA Appeals Court ruled that when “the government has instituted several layers of serviceable safeguards to protect individuals against unwarranted harms and to minimize incidental intrusions, its efforts to protect national security should not be frustrated by the courts.”  “Layers of serviceable safeguards” were all that Americans’ privacy needed – or deserved.

As a presidential candidate, Sen. Barack Obama pledged “no more illegal wiretapping of American citizens,” helping establish him as a civil liberties champion. After he was elected president, Obama reversed his position and spurred the FISA court to perpetuate many Bush-era intrusions.

Obama’s Justice Department vigorously fought court challenges from individuals who believed their phone calls or email had been illegally intercepted.  A 2012  New York Times editorial called the Obama administration’s legal strategy “a  particularly cynical Catch-22: Because the wiretaps are secret and no one can  say for certain that their calls have been or will be monitored, no one has standing to bring suit over the surveillance.”  The Supreme Court sided with Obama, insisting that there were plenty of safeguards – such as the FISA court – to protect Americans’ rights.

Several months later, Americans were shocked to learn (thanks to former NSA contractor Edward Snowden) that  the FISA court had approved daily roundup of scores of millions of Americans’ phone records. A few months later, federal judge Richard Leon slammed that FISA-approved phone records vacuum cleaner as “almost Orwellian… I cannot imagine a more indiscriminate and arbitrary invasion than this systematic and high-tech collection and retention of personal data on virtually every single citizen for purposes of querying and analyzing it without prior judicial approval.” The NSA also vacuumed up Americans’ email on the flimsiest pretexts – such as “someone searching the web for suspicious stuff.”

The FISA court complained that, in the final years of Obama’s presidency, the NSA was guilty of  “an institutional lack of candor” connected to “a very serious Fourth Amendment issue;” naturally, the gory specifics were kept under wraps.  Regardless, one of Obama’s last actions as president authorized NSA to share its vast trove of data on Americans with other federal agencies.  If political abuse of data seized via FISA has not yet occurred, Obama’s “shovel-far-and-wide” bureaucratic bonanza makes it far more likely in the future.

The FISA court has always done a dismal job of overseeing the vast surveillance regime it helped spawn. FISA provided a stamp of legitimacy for perpetual deceit  and perhaps the worst trampling of constitutional rights in American history. Regardless of the outcome of the current brawl, Washington must radically decrease secret surveillance of the American people.