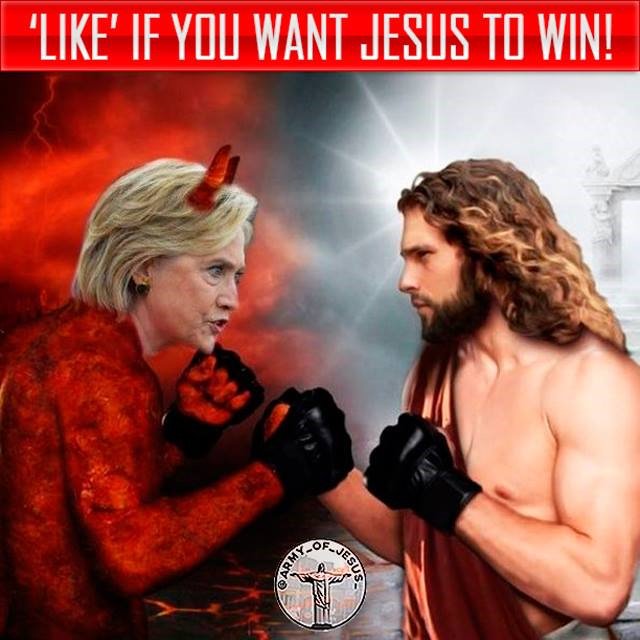 Much of the media coverage is hailing Special Counsel Robert Mueller’s indictment of 13 Russian trolls as stunning proof of foreign hacking of the 2016 election. Mueller may have other cards up his sleeve and the jury is still out. But the U.S. government likely duped far more voters than did the Russians on Election Day 2016.

Mueller revealed that 13 Russians and 3 companies were allegedly involved in attempting to sow dissent in the U.S. prior to and after the election. Most of their spending on Facebook ads occurred after the election, and they included spurring both pro-Trump and anti-Trump outbursts. Many of the ads were dopey even by Facebook standards, including a picture of Jesus getting ready to punch Hillary Clinton. Deputy Attorney General Rod Rosenstein declared that there is “no allegation in the indictment of any effect on the outcome of the American election.”

At least one of Mueller’s allegations blames Russians for a homegrown political debacle. Mueller charged that Russian trolls conspired to “defraud the United States by impairing, obstructing, and defeating the lawful  functions of  the  Federal Election Commission.” But this is akin to blaming panhandlers for the notorious unreliability of the Washington subway system.

The FEC has long been “borderline useless,” as a New York Times editorial scoffed in 2011. Federal Election Commissioner Ann Ravel complained last year that, thanks to FEC gridlock, “major violations are swept under the rug and the resulting dark money has left Americans uniformed about the sources of campaign spending … violators of the law are given a free pass.” Common Cause, People for the American Way, and other liberal groups complained in 2016 that the FEC “is a failed, dysfunctional agency … Campaigns, political operatives, parties, and independent spenders know they can operate with impunity … for campaign finance violations.” FEC negligence permitted far greater violations of ca

Much of the media response to the Mueller indictments implies that the 2016 election would have been relatively clean except for Russian trolls. But no foreign intervention was necessary to make the race the most tawdry affair in modern American history. Only a third of the voters trusted either Trump or Clinton — not surprisingly, since both campaigns deluged the nation with misleading advertisements and false claims.

The 2016 election was in large part a referendum on the record and character of Hillary Clinton. President Obama touted Clinton as the most qualified presidential candidate in history, but voters had to take Obama’s word because his administration brazenly violated federal disclosure law by refusing to reveal Clinton’s emails and other key information prior to the election.

The Freedom of Information Act requires federal agencies to respond to document requests within 20 business days. Prior to 2014, the State Department simply ignored 17 requests it received for Hillary Clinton’s emails. A federal judge and the agency’s inspector general slammed the FOIA stonewalling — such as its assertion that it would take 75 years to comply with a FOIA request for emails from Clinton’s top aides.

Clinton’s emails would have provided pre-election insights into her key decisions, such as her role in championing the 2011 U.S. military attack on Libya. When Libyan dictator Moammar Gadaffi was killed, Clinton laughed during a television interview: “We came, we saw, he died.” Libya has been in chaos ever since, with terrorist groups ascendant and slave markets openly operating.  Clinton has shown no remorse, instead boasting in a Democratic candidate debate that bombing Libya was “smart power at its best.”

Americans never saw Hillary’s messages before election day in part because she routed her email through a private server — perhaps to avoid FOIA. When a congressional committee subpoenaed the emails, a Clinton aide used Bleachbit software to destroy them. Americans have recently learned that FBI chief James Comey, contrary to his public claims, decided before Clinton was interviewed by FBI agents that she would not be charged with criminal wrongdoing. Peter Strzok, the lead FBI investigator into Clinton’s emails, has been exposed as a Trump-hating Clinton partisan, thanks to his texts to his mistress. Maybe this is why the Clinton aide who destroy subpoenaed evidence was given immunity, even though he provided no evidence to further the purported FBI investigation.

The Justice Department Inspector General will soon release its report on problems with the FBI investigation of Hillary Clinton. That pending report may have already spurred numerous unexpected high-level resignations, including FBI deputy director Andrew McCabe. If FBI officials finagled to spare Clinton from criminal charges, that could have had a hundred times more impact on Election Day 2016 than 13 Russian trolls.

The 2016 election was also a referendum on the Obama administration, which routinely refused to release key evidence on its most controversial efforts, including the IRS targeting of conservative non-profits, the Fast and Furious gun-running to Mexico, the schizophrenic intervention in Syria, and the machinations behind the Affordable Care Act. The Society of Professional Journalists and 37 other press organizations condemned the Obama White House in 2014 for “politically driven suppression of news and information about federal agencies.” Obama was following in the footsteps of George W. Bush, who boosted his 2004 reelection chances by suppressing information on his torture and illegal surveillance scandals.

The Russian troll controversy is helpfully spurring a broad consensus for building better protections against foreign meddling in U.S. elections. Unfortunately, no one is suggesting reforms to prevent federal officials from blindfolding voters. But Americans are far more likely to be deluded on Election Day by their own government than by foreigners.

4 Responses to The Hill: U.S. Government Conned More Voters in 2016 Than Russian Trolls Did