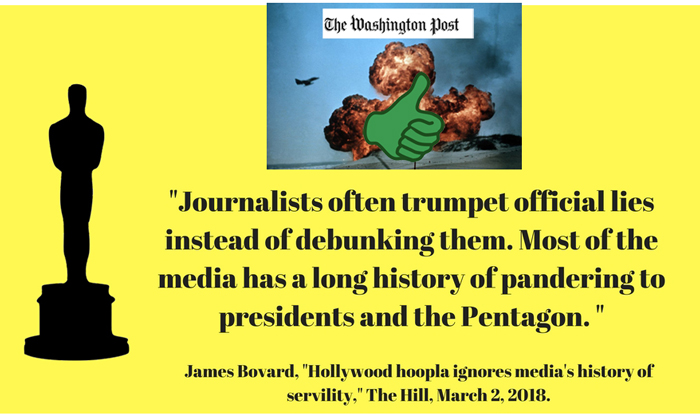 Much of the media nowadays is portraying itself as heroes of the #Resist Trump movement. To exploit that meme, Hollywood producer Steven Spielberg rushed out “The Post,” a movie depicting an epic press battle with the Nixon administration. But regardless of whether Spielberg’s latest wins the Academy Award for best picture on Sunday night, Americans should never forget the media’s long history of pandering to presidents and the Pentagon.

“The Post” is built around the Pentagon Papers, a secret study begun in 1967 analyzing where the Vietnam war had gone awry. The 7000-page tome showed that presidents and military leaders had been profoundly deceiving the American people ever since the Truman administration and that the same mistakes were endlessly repeated. Like many policy autopsies, the report was classified and completely ignored by the White House and federal agencies that most needed to heed its lessons.

Daniel Ellsberg, a former Pentagon official, heroically risked life in prison to smuggle the report to the media after members of Congress were too cowardly to touch it. The New York Times shattered the political sound barrier when it began courageously publishing the report despite a profusion of threats from the Nixon administration Justice Department. After a federal court slapped the Times with an injunction, the Washington Post and other newspapers published additional classified excerpts from the report. Likely because the Washington Post had a female publisher, Spielberg made it, rather than the Times, the star of the show.

Spielberg’s movie portrays Post editor Ben Bradlee denouncing dishonest government officials to publisher Katharine Graham: “The way they lied — those days have to be over.” Defense Secretary Robert McNamara, who deluged the media with falsehoods about battlefront progress, did more than anyone else (except perhaps President Lyndon Johnson) to vastly increase the bloodbath for Americans and Vietnamese. McNamara’s disastrous deceits did not deter the Washington Post from appointing him to its Board of Directors. As author Norman Solomon recently observed, “The Washington Post was instrumental in avidly promoting the lies that made the Vietnam War possible in the first place.”

The Pentagon Papers proved that politicians and their tools will brazenly con the American public to drag the nation into unnecessary wars. But that lesson vanished into the D.C. memory hole — conveniently for obsequious journalists like Post superstar Bob Woodward.

On March 17, 2003, President George W. Bush justified invading Iraq by invoking UN resolutions purportedly authorizing the U.S. “to use force in ridding Iraq of weapons of mass destruction.” A year later, Bush performed a skit at the Radio and Television Correspondents annual dinner featuring slides showing him crawling around the Oval Office peeking behind curtains as he quipped to the poohbah attendees (Donald Trump among them, incidentally): “Those weapons of mass destruction have got to be somewhere… Nope, no weapons over there… Maybe under here?” The crowd loved it and the Post headlined its report on the evening: “George Bush, Entertainer in Chief.” Greg Mitchell, the editor of Editor and Publisher, labeled the performance and the press’s reaction that night as “one of the most shameful episodes in the recent history of the American media, and presidency.”

Most of the media had embedded themselves for the Iraq war long before that diner. The Post buried pre-war articles questioning the Bush team’s shams on Iraq; their award-winning Pentagon correspondent Thomas Ricks complained, “There was an attitude among editors: ‘Look, we’re going to war, why do we even worry about all this contrary stuff?’” Instead, before the war started, the Post ran 27 editorials in favor of invasion and 140 front-page articles supporting the Bush administration’s case for attacking Saddam.

It wasn’t just the Post. Former NBC news anchor Katie Couric revealed in 2008 that there was pressure from “the corporations who own where we work and from the government itself to really squash any kind of dissent or any kind of questioning of” the Iraq war.

Despite the Iraq fiasco, the media happily resumed cheerleading when the Obama administration launched assaults in Libya and Syria. Even in the Trump era — when the press is openly clashing with a president — bombing still provides push button presidential redemption. Trump’s finest hour, according to much of the media, occurred last April when he attacked the Assad regime with 59 cruise missiles, raising hopes that the U.S. military would topple the Syrian government.

When Trump announced he was sending more U.S. troops to Afghanistan, the Washington Post editorial page hailed what Trump calls his “principled realism” — regardless of the futility of perpetuating that quagmire. At a time when Trump is saber-rattling against Iran and North Korea, the media should be vigorously challenging official claims before U.S. bombs begin falling. Instead, much of the coverage of rising tensions with foreign regimes could have been written by Pentagon flacks.

Supreme Court Justice Hugo Black, in his 1971 opinion on the New York Times’ right to publish the Pentagon Papers, declared: “Only a free and unrestrained press can effectively expose deception in government.” Unfortunately, the media often chooses to trumpet official lies instead of fighting them. Permitting glorious tales from eight presidencies ago to absolve subsequent media kowtowing would be as foolish as forgetting the lessons of the original Pentagon Papers. Worshipping the media is as foolish as worshiping politicians.