Comey’s book tour is all about ‘truth’ — but his FBI tenure, not so much

In his ABC interview last Sunday, former FBI chief James Comey boasted endlessly of his devotion to truth, which he said “has to be central to our lives.” Touting his role in bringing down Martha Stewart, he declared, “The truth matters in the criminal justice system.” But, when he was FBI boss from 2013 to 2017, his agency duped the American public whenever convenient.

In 2014, Comey declared that “We do use deception at times to catch crooks, but we are acting responsibly and legally.” His comment was spurred by revelations that an FBI agent had masqueraded as an Associated Press reporter and fabricated an AP story. The Associated Press complained that the FBI’s tactics undermined “the vital distinction between the government and the press,” while the Reporters Committee for Freedom of the Press protested that the ruse “creates the appearance that it is not independent of the government.” But Comey declared the technique was “proper and appropriate,” allowing such scams to continue.

The AP charade was chump change compared to the FBI’s next media flim-flam. After a high-profile confrontation between federal agents and Nevadan ranchers in 2014, the FBI created a bogus independent film crew that spent almost a year hounding the Cliven Bundy family and their supporters, taping their comments to propel federal charges against them. The feds eventually arrested and prosecuted Bundy family members.

This past January, federal judge Gloria Navarro dismissed all charges, denouncing “flagrant” and “reckless” misconduct by federal prosecutors. The FBI was exposed for lying for more than three years regarding its deployment of sniper teams around the Bundys’ ranch prior to the Bundys summoning supporters to protect them.

The Justice Department inspector general last month exposed Comey’s arguably deceitful tactics regarding his campaign to outlaw private encryption, which he perennially portrayed as a grave peril to public safety. After a Muslim couple gunned down 14 people in San Bernardino, Calif., the FBI invoked a 1789 law to sway a federal judge to order Apple to write anti-encryption software that would hand the FBI the keys to break into the terrorist’s iPhone (and all other iPhones).

While Apple appealed that decision, Comey testified to Congress in March 2016 that the FBI was effectively helpless unless Apple was brought to heel. But three weeks later, the Justice Department announced that a private vendor had opened the killer’s iPhone’s records for the FBI. The IG report concluded that Comey “didn’t know that his testimony was false at the time he gave it,” the Electronic Freedom Foundation noted.

In his ABC interview, Comey recited his devotion to transparency — but that was often a scarce commodity when he was FBI chief. On the day after Omar Mateen killed 49 people at the Orlando Pulse nightclub in June 2016, Comey promised: “We will leave no stone unturned and we will work all day and all night to understand the path to that terrible night. … we’ll look at it in an open and honest way, and be transparent about it.” But Comey provided zero transparency over the following 11 months prior to President Trump’s firing him last May. The FBI even redacted the killer’s endorsement of ISIS in the initial transcripts they released of his discussions with hostage negotiators on the night of the shooting.

In his post-carnage comments, Comey complained of the difficulty of investigating lone wolf terrorists like Mateen: “We are looking for needles in a nationwide haystack.” But the FBI never admitted until recently that the killer’s Afghan father — who hosted an anti-U.S. talk show — had been an FBI informant since 2005.

Thanks in part to other Comey policies, the Justice Department suffered a stunning defeat in the biggest terrorism trial since 9/11. The feds charged Noor Salman, Omar Mateen’s widow, with material support of a foreign terrorist organization and lying to the FBI about knowing about her husband’s plan to attack on the nightclub. After the FBI interrogated her for 18 hours without a lawyer present, Salman signed a statement composed by an FBI agent. But her supposed confession had numerous falsehoods (added to bolster the prosecution) that torpedoed the government’s case.

After the verdict was announced, the jury foreman declared: “I wish that the FBI had recorded their interviews with Ms. Salman as there were several significant inconsistencies with the written summaries of her statements.” FBI agents, unlike many local and state police departments, have long refused to record interrogations or suspects’ confessions, instead maximizing their own power by writing up expo facto memos (known as Form 302) that are presented in court as the gospel truth.

In 2014, Attorney General Eric Holder ordered the FBI and other federal law enforcement agencies to record interviews with suspects. But Comey allowed the FBI to scorn Holder’s mandate. Comey’s stonewalling on this issue helped destroy the credibility of the FBI’s investigation into Hillary Clinton’s email shenanigans.

When FBI agents interviewed Clinton in July 2016, there was no recording and no transcript. Relying on 302 memos instead of tapes gave FBI officials unlimited sway over what the American people would be told about the interview — and the rest of the investigation. In September 2016, shortly after the FBI publicly released the purported 302 on the Clinton interview, Peter Strzok, the lead FBI investigator for the Clinton emails and one of the agents who interviewed her, texted his mistress, FBI lawyer Lisa Page: “There are VERY inflammatory things in the 302s we didn’t turn over to Congress … that are going to come out in FOIA and absolutely inflame Congress.”

Strzok was eventually evicted from Special Counsel Robert Mueller’s investigation because of his intense anti-Trump bias but this particular fiasco would not have occurred if Comey had heeded Holder’s directive.

In his ABC interview, Comey described himself as the “guardian” of the FBI’s role “as an independent force in American life.” The lies and abuses that proliferated during Comey’s reign as FBI director are a reminder why the Founding Fathers never intended for a federal police force to become “an independent force” akin to the Senate or Supreme Court. Comey helped sway millions of Americans to distrust the FBI — which, in the long run, may be his only positive political legacy.

James Bovard is the author of “Public Policy Hooligan” (Kindle version 2012), “Attention Deficit Democracy” (St. Martin’s/Palgrave, 2006), and eight other books. He is a member of the USA Today Board of Contributors and has written for the New York Times, Wall Street Journal, Playboy, Washington Post, and many other publications. 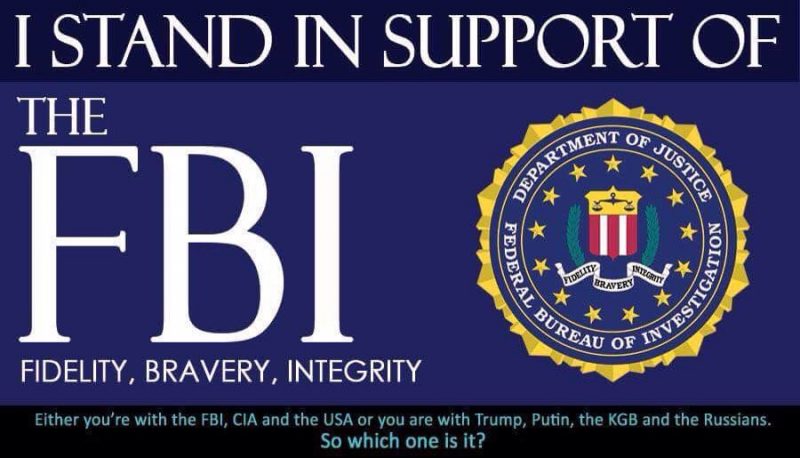