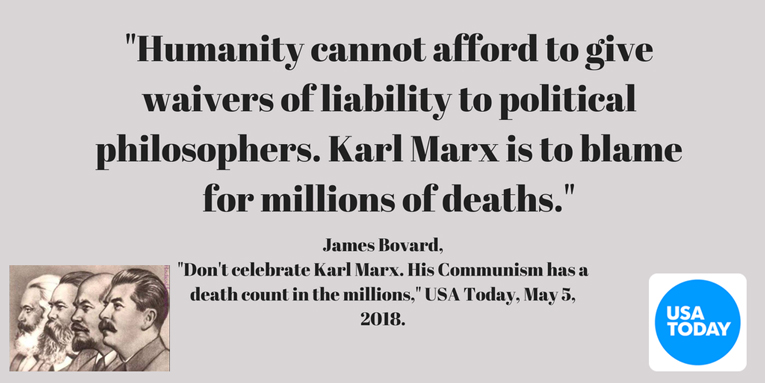 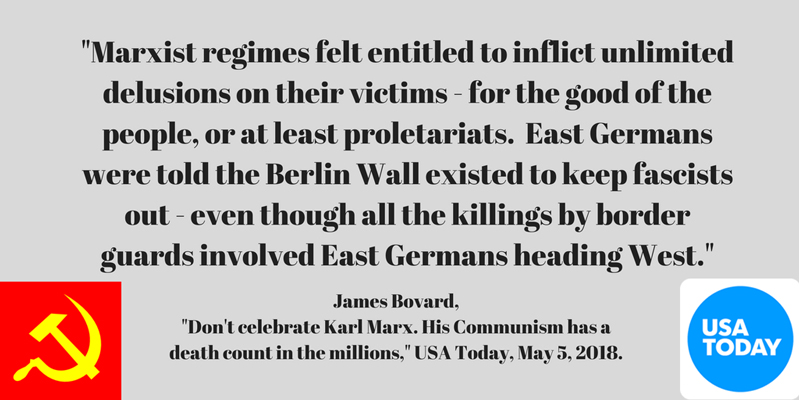 Don’t celebrate Karl Marx. His Communism has a death count in the millions.

It’s Karl Marx’s 200th birthday, but there’s nothing to celebrate. His dream of a utopia lead to millions of deaths at the hands of tyrants.

Saturday marks 200 years since the birth of Karl Marx, and tributes are arising out around the globe. In a New York Times tribute headlined, “Happy Birthday, Karl Marx. You Were Right!” philosophy professor Jason Barker declared that “educated liberal opinion is today more or less unanimous in its agreement (with) Marx’s basic thesis” on the flaws of capitalism. But this is true only if “educated liberal opinion” simply does not care about tyranny.

But Marxism in practice didn’t work out so well. Communist regimes produced the greatest ideological carnage in human history, killing more than a hundred million people in the last century. While some apologists claim it is unfair to Marx to blame him, the seeds of tyranny were there from the start.

Marx’s salvation scheme was built on a mystical foundation supplied by German philosopher G.W.F. Hegel. Though The New York Times’ eulogy for Marx touted Hegel as an advocate of a “rational liberal state,” Hegel was derided in his lifetime as the “royal Prussian court philosopher” and for promoting the notion that the State is inherently rational. Hegel deified government, asserting that “the State is the Divine Idea as it exists on earth.”

Marx, perhaps blinded by Hegel, never recognized the inherent danger of Leviathan.  Nor did Marx explain how communism would actually arise after the demolition of capitalism.  Equally important, he never even attempted to reveal how the State would “wither away” after the “dictatorship of the proletariat” commenced. Marx’s humanitarian piffle did nothing to deter Lenin from decreeing that “liberty is so precious that it must be rationed.”

Marxists assumed that vastly increasing government power was the key to liberating humanity. Glorifying command-and-control was the flipside of demonizing prices and profits. But all-powerful regimes quickly became ends in themselves. In 1932, Soviet dictator Josef Stalin decreed the death penalty for any theft of state property. As millions of Ukrainians were starving due to the brutal collectivization of farms, even children poaching a few ears of corn could be shot.

Marx continues to appeal to social justice warriors thanks to axioms such as “from each according to his ability, to each according to his need.” And who determines “need”?  The presumably omniscient, benevolent State. Marxism promised to end the “class struggle” but did so by subjugating almost everyone to officialdom. Abolishing private property left people hostage to petty government officials who punished anyone who failed to kowtow to the latest dictates.

POLICING THE USA: A look at race, justice, media

Marxist regimes felt entitled to inflict unlimited delusions on their victims — for the good of the people, or at least proletariats. East Germans were told the Berlin Wall existed to keep fascists out — even though all the killings by border guards involved East Germans heading West. Marxism promised a utopia, and that unsecured pledge sufficed to treat subjects like serfs bound to endlessly submit and obey. Anyone who tried to escape was treated as if they were stealing government property.

Communism is still often portrayed as morally superior to capitalism because it banishes greedy corporations poisoning people for profit. But East Bloc regimes became a vast graveyard for Mother Nature. Pollution was pervasive largely due to the deification of economic plans. As long as the factories roared and steel output rose, it didn’t matter if people and everything else were perishing.

I traveled behind the Iron Curtain many times in the mid-late 1980s to study first-hand the results of Marx’s philosophy. I saw pervasive fear in the faces of emaciated people on the streets of Bucharest, Romania, and I saw the terror in the eyes of young Czechs when anyone touched on the subject of politics. I experienced border guards who flew into a tizzy at any piece of paper that might contain subversive ideas. And I witnessed legions of western apologists who always insisted on giving communist regimes more time and more western handouts to redeem themselves.

Marx never intended for his doctrines to spur perpetual dread in hundreds of millions of victims. But it was criminally naive to expect happy results from any system that bestowed boundless power on rulers. On Marx’s birthday, never forget that a philosophy that begins by idealizing government will end by idealizing subjugation.