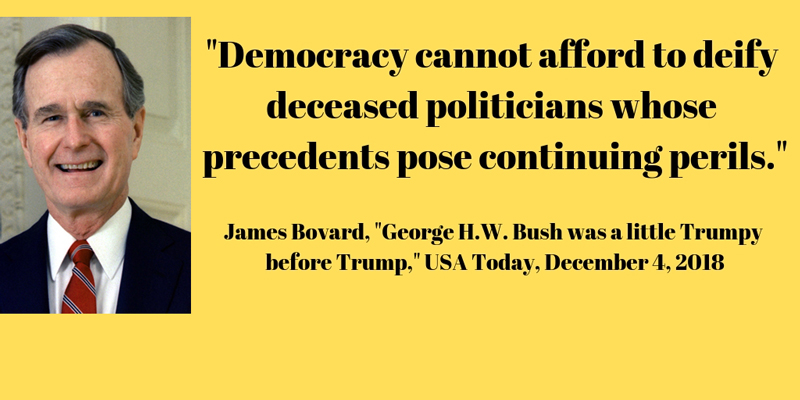 George H.W. Bush was a little Trumpy well before we had Donald Trump

Those who laud President Bush forget he limited trade, escalated our drug war, and obstructed a special counsel.

Tributes are pouring in for former President George H.W. Bush, who passed away last week at the age of 94. Bush’s gentlemanly manners and reasonable rhetoric are being lauded by many people repulsed by the current White House occupant. But for all the differences of style between Donald Trump and the first president Bush, the two men have more in common than we’d like to remember.

Bush was the most protectionist president since Herbert Hoover. Like Trump, he spoke of the need for level playing fields and fair trade. But Bush-style fairness gave federal bureaucrats practically endless vetoes over Americans’ freedom to choose foreign goods. Bush’s Commerce Department ravaged importers with one bureaucratic scam after another, using the dumping law to convict 97 percent of imports investigated, claiming that their prices were unfairly low to American producers (not consumers).

Bush also ordered the U.S. International Trade Commission to investigate after ice cream imports threatened to exceed one percent of the U.S. market. And he perpetuated import quotas on steel and machine tools.

While Bush declared that trade was the key to spreading prosperity to poorer nations, he slapped new textile import quotas on Nigeria, Indonesia, Egypt, the Philippines, Burma (now Myanmar), Costa Rica, Panama, Pakistan and many other nations. Mexico was allowed to sell Americans only 35,292 bras in 1989 — part of a byzantine regime that also restricted imports of tampons, typing ribbons, tarps, twine, table linen, tapestries, ties and thousands of other products.

A 1989 White House report concluded that the trade restrictions added 50 percent to the price of imported clothing.

Though Bush called for a “kinder, gentler” nation while campaigning for the presidency in 1988, he turned federal drug policy into a holy war, demonizing drug users while hailing Drug Enforcement Administration agents as America’s “greatest freedom fighters.”

Bush’s choice for drug czar, William Bennett, endorsed public beheadings of drug dealers while his administration began deluging law enforcement with surplus military equipment that would lead to no-knock raids and wrongful killing disasters around the nation in the following decades.

The Bush administration turbocharged asset forfeiture, spurring seizures of private property on the slightest pretexts from individuals who were never convicted of crimes. Abuses became so widespread that a September 1992 Justice Department internal newsletter lamented: “Like children in a candy shop, the law enforcement community chose all manner and method of seizing and forfeiting property, gorging ourselves in an effort which soon came to resemble one designed to raise revenues.”

Despite the news media exposes of gross injustices, the forfeiture juggernaut continues ravaging the rights of innocent Americans decades later and spurring delusions of absolute power in law enforcement. Last week in a Supreme Court hearing, Indiana Solicitor General Thomas Fisher even asserted that forfeiture laws entitle police to confiscate any car going more than 5 miles over the speed limit.

Bush is being praised this week for his inclusive rhetoric, but his drug war converted low-income Americans into third-class citizens. In a Supreme Court case, Bush’s Solicitor General Kenneth Starr effectively championed police sweeps and warrantless searches of interstate bus passengers for illicit drugs. The Florida Supreme Court had compared such sweeps to Nazi and Soviet abuses, but the Bush administration swayed the Supreme Court to define down the freedom of Americans who could afford nothing better than a Trailways ticket.

Bush had his own special counsel scandal

Many people who are praising Bush this week hope that special counsel Robert Mueller annihilates President Donald Trump. But Bush’s most perilous precedent might have been his de facto demolition of the work of independent counsel Lawrence Walsh.

On Christmas Eve 1992, Bush pardoned six Reagan administration officials for their roles in Iran-Contra, the illegal arms-for-hostage deal that blighted the final years of the Reagan presidency. Former Defense Secretary Caspar Weinberger was scheduled to go on trial two weeks later on charges of lying to Congress.

Walsh denounced the pardons as part of a cover-up and said that they undermined his investigation of possible criminal conduct by Bush himself. Walsh also reported that the president’s pardons prevented Bush from having to testify in court and face “searching questions” on his own conduct.

Bush’s pardons greatly reduced the likelihood that his co-conspirators would ever turn state’s evidence against him. If Walsh’s investigation had led to Bush’s conviction, the Bush brand name might have been sufficiently damaged that his son would not have captured the presidency in 2000.

As the funeral oration in Shakespeare’s “Julius Caesar” warned, “The evil that men do lives after them, the good is oft interred with their bones.” Unfortunately, America remains imperiled by Bush’s trade, drug and pardon policies and precedents.

It is possible to applaud the 41st president’s World War II heroism and decades of government service without placing a halo over his four years in the White House. The mere fact that George H.W. Bush isn’t Donald Trump should not expunge Bush’s failures. Democracy cannot afford to deify deceased politicians whose precedents pose continuing perils.

James Bovard, author of “Attention Deficit Democracy,” is a member of USA TODAY’s Board of Contributors. Follow him on Twitter: @JimBovard.

Thanks to Canva for that free quote jpeg.