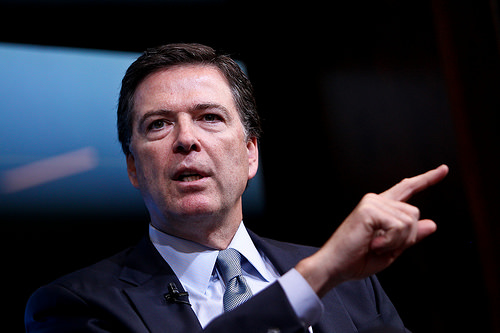 You may have seen him on a prayer candle, but James Comey is no saint

New revelations have made clear the conclusion many of us had already come to: James Comey was a reckless and untrustworthy FBI director.

Since President Trump fired FBI director James Comey in May 2017, Comey has been portrayed as a martyr and saint by much of the media. Comey fueled the adulation with his memoir, “A Higher loyalty: Truth, Lies, and Leadership.” But today’s report by the Justice Department Inspector General should obliterate whatever halo Comey still possesses.

Comey wrote seven memos summarizing his interactions with Donald Trump. After he was fired, Comey sent one of those memos to a personal friend and lawyer and directed him to leak the contents to a specific New York Times reporter. The leak achieved the result Comey sought — the appointment of a special counsel to investigate President Trump.

James Comey’s decision that he was above FBI policy

Today’s report documents how Comey brazenly violated federal and FBI policies regarding with his disclosures. Top FBI officials told the IG that they were “shocked,” “stunned,” and “surprised’ that Comey would leak the contents of one of the memos to a reporter. The IG concluded: “The unauthorized disclosure of this information — information that Comey knew only by virtue of his position as FBI Director — violated the terms of his FBI Employment Agreement and the FBI’s Prepublication Review Policy.”

Comey claimed that most of the memos he wrote while FBI chief regarding his dealings with Trump were “personal documents” like his will or his passport. That defense cannot even pass the laugh test. The IG concluded that the memos were “official FBI records” and that Comey violated FBI rules by “failing to either surrender his copies of Memos 2, 4, 6, and 7 to the FBI or seek authorization to retain them; by releasing official FBI information and records to third parties without authorization; and by failing to  immediately alert the FBI about his disclosures to his personal attorneys once he became aware in June 2017 that Memo 2 contained” information “that the FBI had determined were classified at the ‘CONFIDENTIAL’ level.”

When asked why he violated FBI policy on leaking the memo to the media, Comey declared that the issue was of “incredible importance to the Nation, as a whole” and that he leaked because it was “something I [had]  to do if I love this country…and I love the Department of Justice, and I love the FBI.” Comey apparently believed that his affection exempted him from the rules that all other current and former FBI officials must follow.

The IG found it “particularly concerning” that Comey failed to disclose to the FBI that he retained copies of his official memos in his personal safe at home even after FBI officials visited his house to remove all FBI property. “Comey took for himself the ‘carte blanche authority’ expressly denied by the courts” to FBI officials, the report complained.

The IG concluded that by using sensitive information “to create public pressure for official action, Comey set a dangerous example for the over 35,000 current FBI  employees — and the many thousands more former FBI employees — who similarly have access to or knowledge of non-public information.” The IG report warned that “the civil liberties of every individual who may fall within the scope of the FBI’s investigative authorities depend on FBI’s ability to protect sensitive information from unauthorized disclosure.”

This is true but it ignores the FBI’s long record of violating Americans’ liberties and covert political interventions. As Yale University historian Beverly Gage noted, FBI director J. Edgar Hoover “insisted that investigative files be kept secret, waging repeated battles to keep them away from the courts and Congress. But he also became a master of the leak, parceling out choice tidbits to reporters at strategic moments.” Hoover’s FBI covertly intervened in the presidential elections of 1948 (seeking to sabotage Henry Wallace’s campaign), 1952 (smearing Democratic candidate Adlai Stevenson as gay), and 1964 (spying on the campaign of Republican nominee Barry Goldwater).

This misconduct rings similar to what was allowed from Hillary Clinton

Comey’s abuse of power to undermine President Trump should be viewed in light of last year’s Inspector General report on the FBI’s kowtowing in their investigation of Hillary Clinton’s email server. The FBI chose to exonerate Secretary Clinton despite her violations of federal laws on the handling of confidential information and despite the destruction of evidence and false statements by her aides and associates. The FBI intended to absolve her “absent a confession from Clinton” when they finally interviewed her in July 2016. Comey assured the IG that “by her demeanor, she was credible and open and all that kind of stuff” in that interview — even though FBI agents there believed Clinton had lied to them about not realizing she received confidential information.

Another rebuttal by a USA Today reader

The Justice Department, choosing not to prosecute the former FBI chief for the violations disclosed Thursday, awarded Comey the same “get out of jail free” card that the FBI granted to Hillary Clinton. Other FBI officials who have been investigated were not so lucky. Fourteen FBI officials have been referred to the bureau’s Office of Professional Responsibility for leaks or unauthorized disclosures in recent years, and several of them were fired, suspended, or censured, according to internal FBI documents disclosed by Judicial Watch. Though Comey’s leaks had far greater impact and propelled a lengthy investigation that eventually concluded that there was no criminal conspiracy between the Trump campaign and Russia, his lofty former position may have insulated him from legal perils.

Thursday’s report is a reminder that Trump’s frequent falsehoods do not automatically make his opponents trustworthy. Americans have yet to learn the full extent of illegitimate and/or tawdry political and bureaucratic meddling during and after the 2016 presidential campaign. There is at least one more Inspector General report pending on the FBI’s conduct regarding the Foreign Intelligence Surveillance Act (FISA) wiretaps of the Trump campaign — a report that may prove far more troublesome to plenty of former FBI officials.