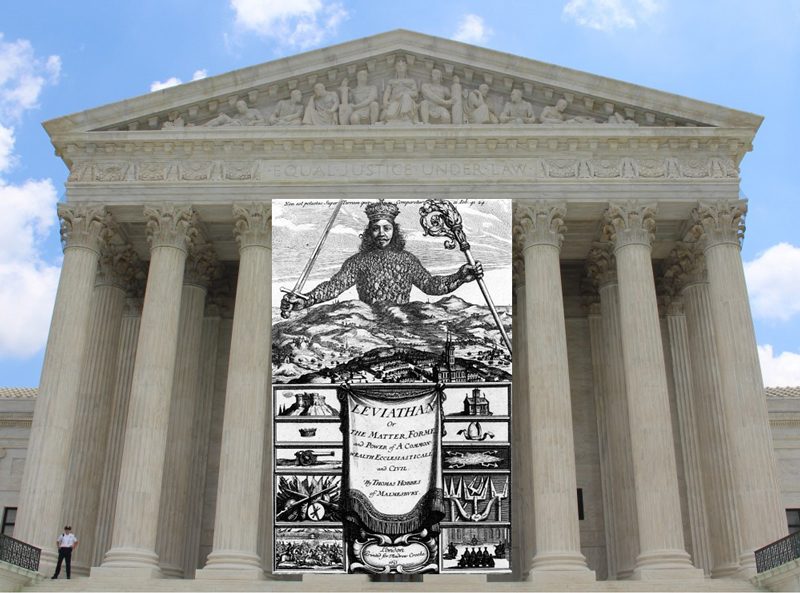 The Sham of Government Secrecy

The Supreme Court in June ruled that the federal government can keep secret the food-stamp sales totals of grocery stores. By a 6 to 3 vote, the Court declared that such business records are exempt from disclosure under the federal Freedom of Information Act (FOIA). This case, started eight years ago by the Argus Leader, a South Dakotan newspaper, is another landmark in cloaking federal data from the American people.

The Court upheld keeping the data that the federal government receives secret despite there being no evidence that such disclosures would harm anyone. Argus Leader news editor Cory Myers labeled the decision “a massive blow to the public’s right to know how its tax dollars are being spent, and who is benefiting.” Grocery stores were not conscripted to take food stamps but they somehow have rights superior to American citizens, whose privacy continues to be ravaged by the National Security Agency.

Controversies over the food stamp program have multiplied as evidence accumulated revealing that the program is a public-health disaster. A 2017 study published in BMC Public Health found that food-stamp recipients were twice as likely to be obese as eligible non-recipients. That confirms a 2015 USDA report that revealed that food-stamp recipients are far more likely to be obese than eligible non-recipients (40 percent versus 32 percent). But the feds have consistently sought to limit public information on the program. The USDA and the Obama administration helped block a 2013 congressional proposal to disclose how recipients actually spend food stamps. Restrictions on disclosure have deterred bipartisan-supported reforms that would discontinue the use of food stamps for purchasing sugar-sweetened beverages — the item most commonly purchased with food stamps.

But instead of pushing for substantive reforms that would make the program less unhealthy, the Trump administration floated a proposal to distribute food boxes instead of food stamps to low-income Americans. The “Blue Apron” option was always doomed, but it allowed the Trump team to pretend they sought real reforms while keeping the grocery-store lobby happy.

Justice Stephen Breyer’s dissent in the Argus Leader case warned that the decision “will deprive the public of information for reasons no better than convenience, skittishness, or bureaucratic inertia.” The Supreme Court gave a kick to a disclosure law that had already lost most of its teeth.

In October 2001, Attorney General John Ashcroft assured federal agencies that the Justice Department “will defend your decisions” to deny FOIA requests on broader grounds than previously prevailed. Judicial Watch characterized the Bush administration’s FOIA attitude as “arrogance throughout — that the government is not to be questioned.” The Bush administration blocked disclosures of almost all USA PATRIOT Act abuses and the ACLU later complained that “responses to FOIA requests are hopelessly slow.”

“Hope and Change” arrived on Barack Obama’s second day in office, when he called FOIA “the most prominent expression of a profound national commitment to ensuring an open government.” He declared that FOIA “should be administered with a clear presumption: In the face of doubt, openness prevails.”

Unless, of course, White House political appointees objected. Three months after Obama took office, White House counsel Gregory Craig quietly notified all federal agencies that “all documents and records that implicate the White House in any way are said to have ‘White House equities’ and must receive an extra layer of review, not by agency FOIA experts, but by the White House itself,” a 2016 congressional report noted. Anything that could tarnish the administration’s image violated its “equities.” A memo by the staff at the National Archives admitted, “We live in constant fear of upsetting the WH (White House).” Politico noted in 2016 that, in some cases, White House FOIA “referrals have led to years of delay. One federal FOIA officer groused that “the White House wanted to see requests far in advance, and they wanted to control the timing of the release and what was going to be released,” the Washington Times reported. Americans did not learn of the White House subversion of FOIA until 2014 and even then it received minimal news coverage.

In 2011, Obama’s Justice Department formally proposed permitting federal agencies to falsely claim that requested documents did not exist. If federal agencies believed information should not be disclosed, the agency “will respond to the [FOIA] request as if the excluded records did not exist,” the Federal Register notice announced. The ACLU complained that the proposal perverted “a law designed to provide public access to government information to be twisted to permit federal law enforcement agencies to actively lie to the American people.”

That proposal was dropped after a media backlash but the Obama administration’s other policies undercut the law. A 2016 congressional report, titled “FOIA Is Broken,” noted that many journalists had abandoned “the FOIA request as a tool because delays and redactions made the request process wholly useless for reporting.” The Pentagon responded to a request for a list of titles of its reports by offering a partial response if the journalist promised to never file another FOIA request. The Drug Enforcement Agency effectively torpedoed a FOIA request regarding notorious Mexican drug lord “El Chapo” by charging $1.4 million for the response. The DEA denied a FOIA request by someone seeking “information about his own kidnappers … because he did not have a signed waiver from the men who had held him hostage,” the Washington Examiner reported.

The 2016 congressional report concluded that “the Executive Branch culture encourages an unlawful presumption in favor of secrecy when responding” to FOIA requests. Some federal agencies routinely and unjustifiably denied most FOIA requests, presuming that people are not seriously seeking information until they file a lawsuit. “Nearly every document handed out by the Office of the Director of National Intelligence has been prompted by a lawsuit,” the blog Techdirt noted in 2014.

While Obama boasted of “the most transparent administration in history,” federal agencies slammed the door on routine requests — especially from the media. The Associated Press reported in 2015 that the Obama administration “set a record again for censoring government files or outright denying access to them” under FOIA.

The FOIA and I

My own experience, stretching back more than 30 years, is that federal agencies routinely act as if anyone who has publicly criticized their programs forfeits his rights under FOIA. When I was researching a cover story for Reason magazine in 1985 on the 25th anniversary of the Peace Corps, I requested copies of their audits from the 1960s. The FOIA officer complained that it would be too burdensome to copy all those reports and suggested I ask for the summaries of the report instead. I obliged him, but when I returned a few weeks later to get the summaries, I was told that the reports had “abstracts” instead of “summaries” so I would need to file a new request and start the FOIA process (and its delays) all over again. The FOIA officer knew that I was on deadline. That chicanery flavored the resulting article.

In 1989, when I was investigating the Job Training Partnership Act for Readers’ Digest, I filed a FOIA request with the Labor Department to garner the information they received on the program from around the nation. Eventually, I was notified that the documents were available for viewing at Labor Department headquarters. I arrived — took one glance at the smattering of pages they provided — and told the FOIA deputy thumb-twiddler that this material had nothing to do with what I requested. The 40ish, pasty-skinned bureaucrat leaned back in his chair, crossed his arms across his narrow chest, and sneered, “Gee — that’s too bad.” His response wasn’t a complete surprise, since he’d glared at me as if I had the bubonic plague when I entered his office. Anyone seeking potentially embarrassing official records was presumed to be a scoundrel. But I found ways to get enough inside information that my article was vehemently denounced by Labor Secretary Elizabeth Dole.

In subsequent decades, I’ve had plenty of FOIA strikeouts with agencies ranging from the FBI to the TSA. Some agencies, such as AmeriCorps, have provided partial responses to my requests in a timely manner.

We owe it to Hillary Clinton for finally obliterating FOIA’s credibility. After she was appointed Secretary of State, Mrs. Clinton effectively exempted herself from FOIA, setting up a private server to handle her official email. The State Department ignored 17 FOIA requests for her emails prior to 2014 and said it needed 75 years to comply with a FOIA request for her aides’ emails. In 2015, Federal judge Richard Leon condemned State’s FOIA foot-dragging, declaring that “it appears they didn’t get anything done for two years.” Regarding the State Department’s excuses for one FOIA request for 60 emails, the judge snapped, “Now, any person should be able to review that in one day — one day. Even the least ambitious bureaucrat could do this.” The Federal Bureau of Investigation shrugged off the fact that Mrs. Clinton’s aides used Bleachbit to destroy 30,000 of her emails under subpoena by a congressional committee. Federal judge Royce Lamberth recently labeled the Clinton email affair “one of the gravest modern offenses to government transparency.”

FOIA is “getting worse under Trump,” according to the Freedom of the Press Foundation. FOIA requesters received nothing or censored files in 78 percent of cases in 2017, and stonewalling often seems to be encouraged from the Oval Office downwards.

The Supreme Court could have taken many cases in recent decades that spurred rulings to make FOIA more binding on federal agencies. But, as on issues such as the Fourth Amendment prohibition on unreasonable searches and property rights violations, the Supreme Court was satisfied with sporadic pretty phrases that did nothing to place government under the law.

Forty-one years ago, the Supreme Court declared that FOIA’s purpose was “to ensure an informed citizenry, vital to the functioning of a democratic society.” After the Supreme Court’s Argus Leader decision, perhaps the law should be retitled “The Freedom from Information Act.” If democracy depends on transparency, and government transparency is an illusion, then what is American democracy nowadays?

This article was originally published in the September 2019 edition of Future of Freedom.

One Response to The Sham of Government Secrecy