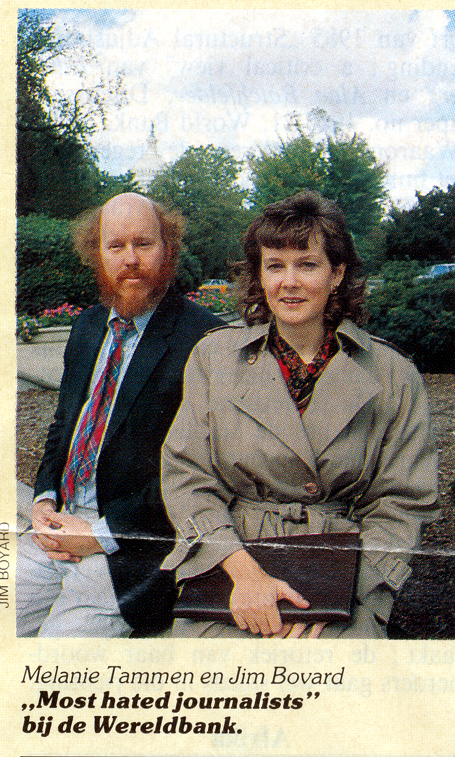 The Senate impeachment trial of President Trump is hinging on  U.S. foreign aid to Ukraine. The Democratic House impeachment managers flogged the details of that aid so hard that even policy junkies are ready for cry for mercy.

But almost no one is mentioning that foreign aid  has been a perpetual boondoggle for more than 60 years.  The U.S. has been bankrolling Ukraine’s fight against corruption for 20 years and Ukraine remains one of the most corrupt nations in the world.  According to some members of Congress, that just proves that the U.S. needs to give more.

I have been hammering foreign aid for over 30 years.  The U.S. government is the largest funder of the World Bank, and I zapped their programs many times starting in the 1980s.   Here is a link to a roundup of some of my attacks on the World Bank in the Wall Street Journal, New York Times, and other places.

The 1989 photo to the left is from a Belgian magazine, Trends,  which referred to Melanie Tammen and I as the “most hated journalists” by the World Bank – reputedly a comment from their press office.  Melanie and I sometimes had luck acquiring World Bank confidential documents, much to their chagrin.  Melanie did some of the best critiques of foreign aid in the 1980s and early 1990s, writing for the Wall Street Journal and elsewhere while working for the Heritage Foundation, Competitive Enterprise Institute, and the Cato Institute.  She spoke at the 1989 Libertarian National Convention; her spiel starts at the one hour & 18 minute mark in this C-SPAN tape.

Foreign aid is incorrigible – just like politicians.  There is no reason to trust Trump with foreign aid – or to trust any subsequent president.

One Response to Foreign Aid, The Boondoggle that Never Ends