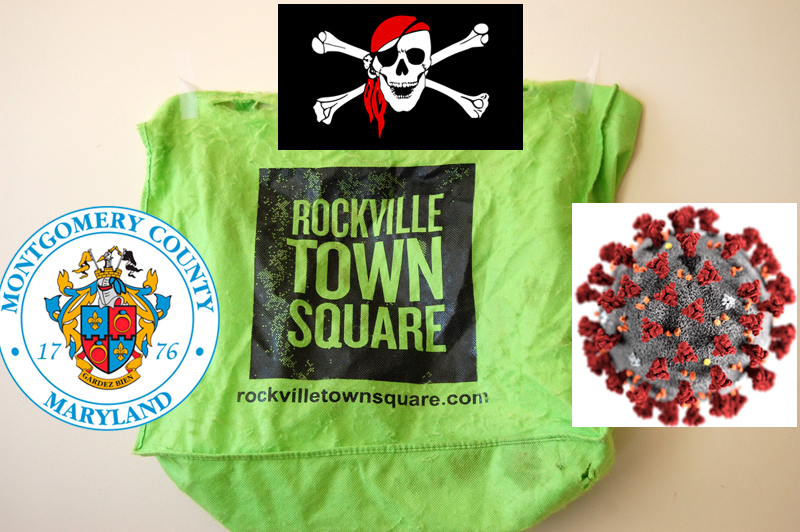 A liberal Maryland municipality caved to environmentalists and is sustaining a tax on single use plastic bags amid COVID.

Politicians nowadays are shutting down everything except their own virtue signaling. The COVID-19 pandemic is spurring restrictions and lockdowns across the nation. But one Washington area government showcases the shams behind some of the political rescue efforts.

“Loco MoCo” is the nickname for Montgomery County, Maryland—one of the most zealous liberal jurisdictions in the nation. Unfortunately, the county of a million people is also a pandemic hotspot, with 2,868 cases and 110 deaths as of Wednesday.

On April 9, Montgomery County’s chief health officer, Travis Gayles, decreed that any grocery store customer who failed to wear a mask would be fined $500. Gayles discouraged local residents from acquiring and wearing the most reliable protection, such as surgical masks or N95 masks, which the county said “should be reserved for health care workers.” At least Gayles did not threaten to send SWAT teams after any citizen who procured good masks. Gayles later rescinded the threat to fine individuals, but added new restrictions on grocery shopping in the county.

Hundreds of grocery workers nationwide have been infected by the coronavirus and at least 30 have died. One of the biggest sources of contagions in grocery stores is ratty old recycling bags that customers drag along to tote their purchases home. New York Times science columnist John Tierney reported that a study of “supermarkets in Arizona and California found large numbers of bacteria in almost all the reusable bags—and no contamination in any of the new single-use plastic bags.”

Meanwhile, the San Francisco Department of Public Health stated that it was plausible that “widespread use of reusable bags may cause gastrointenstinal infections if they are not regularly cleaned.”

Dirty grocery tote bags put grocery workers in peril, and a Chicago union called for an “end to the disease-transmitting bag tax.” The evidence on the peril of reusable bags was so strong that San Francisco, the Valhalla for American leftists, banned customers from bringing their reusable bags to stores, and many other localities and states suspended their bag taxes or banned the use of reusable bags.

LoCo MoCo, which imposed a tax on plastic grocery bags in 2011, momentarily lurched in the direction of sane health policy. Councilmember Will Jawando, a former Obama administration official, crafted a bill to suspend the grocery bag tax to “minimize risk” because “the health and safety of all Montgomery County residents must come first.” He quickly garnered five co-sponsors on the nine-member county council. Councilmember Nancy Navarrodeclared “it is critical that we do eliminate whatever kind of possibility of transmission there might be.”

But the Sierra Club and other environmental groups vehemently objected. The Sierra Club warned that suspending the tax “will erode the County’s significant progress in addressing plastic pollution.” The environmental group fretted that suspending the bag tax will leave “the public with a false sense of security in encouraging single-use plastic shopping bags” which “are difficult to clean.” Yo, Sierra Club! That’s why they are called “single-use” bags.

The County Council quickly capitulated to the environmentalist backlash. Instead, they offered a farcical Solomonic solution—at least as far as sawing off a chunk of grocery workers’ life expectancy. The bag tax was sustained but, as Jawando announced in a press release, chief health officer Gayles will encourage people to wash reusable bags after each visit to the grocery store. Jawando also revealed that the local “Department of Environmental Protection has agreed to work on a campaign and resources to remind consumers to wash their reusable bags that can be posted at grocery stores and retail establishments.”

These efforts will be as effective as an edict requiring all shoppers to hop through grocery stores on their left foot while holding their breath. A veteran grocery clerk at a large chain store scoffed when I told him the county would urge shoppers to wash their battered bags. A University of Arizona study found that “97 percent of people never washed their reusable bags, thereby turning them into petri dishes of bacteria growth,” as Tierney noted. But “wash your bags after every shopping trip” finger-wagging permits liberals to pretend to give a damn about grocery store clerks.

Maryland officials predict that the coronavirus epidemic will peak in the coming days—long before county education efforts on grocery bags get rolling. I asked the health department how many local residents “currently use proper sanitary methods with their reusable bags,” but got no response. The health department also failed to provide “an estimate of how many additional cases of COVID-19 may result from residents bringing contaminated bags to the grocery store.” Similarly, Councilmember Nancy Navarro did not respond to my emailed question: “How many additional COVID-19 infections should Montgomery County be willing to accept or tolerate to signal the county government’s support for recycling?”

Perhaps the only thing more sacred in Montgomery County than environmentalist posturing is government revenue. County Councilmember Hans Riemer, who co-sponsored Jawando’s initial bill, said that suspending the bag tax was “too complicated … expensive, and [addressed] a minimal health issue.” Riemer also noted that suspending the tax, “would have cost the county hundreds of thousands of dollars to implement,” the DCist noted. Riemer explained: “A lot of councilmembers just thought it wasn’t worth the effort.”

Besides, any grocery clerks who perish as a result of tainted reusable bags were probably not major campaign donors anyhow. Maybe Montgomery County and the Sierra Club could formally consecrate grocery store clerks who die of COVID as martyrs in the recycling wars. The MoCo grocery bag tax flip flop helps explain why so many Americans scoff at Pandemic Security Theater.