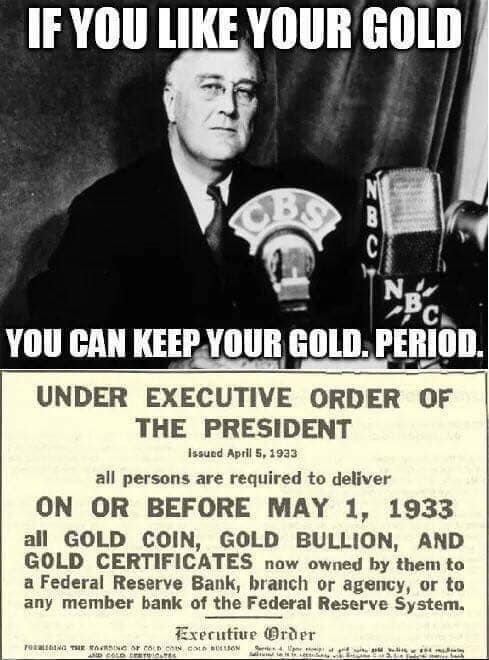 Today is the anniversary of one of President Franklin Roosevelt’s worst infamies – his confiscation of privately-owned gold.  I wrote the following article in 1999 for Sheldon Richman at the Foundation for Economic Education. This article was a spinoff of Freedom in Chains: The Rise of the State and the Demise of the Citizen (St. Martin’s Press, 1999).Freeman, June 1999

The New Deal established much of the moral framework of contemporary political life. Though some of the programs and policies of that era have been terminated, the moral heritage of the New Deal continues to permeate American government and political thinking.

In 1936 Franklin Roosevelt declared, “I should like to have it said of my first Administration that in it the forces of selfishness and of lust for power met their match. . . . I should like to have it said of my second Administration that in it these forces met their master.”[1] No American president has rivaled Roosevelt in his denunciation of what he called “economic royalists.” He sought to “master” the “forces of selfishness” by making government master of every person’s private financial destiny. Like today, the citizen who wanted to retain control over his own life was selfish, while the bureaucrat who wanted to seize power over the citizen was automatically presumed benevolent.

One of the most controversial New Deal policies was the seizure of citizens’ gold.[2] During the Great Depression, several foreign nations repudiated their promises to redeem their currencies for gold. In 1933, when Roosevelt became president, the United States had the largest gold reserves of any nation in the world. He announced on March 8, 1933, a few days after taking office, that the gold standard was safe. But three days later, he issued an executive order forbidding gold payments by banks; Treasury Secretary Henry Morgenthau, Jr., announced on March 11 that “the provision is aimed at those who continue to retain quantities of gold and thereby hinder the Government’s plans for a restoration of public confidence.”[3] Thus, according to Morgenthau, any limit on government power was bad for public confidence. And whatever confidence people might seek to achieve must be left in abject dependence on politicians’ latest salvation scheme.

The ban on bank gold payments created widespread doubts about the Roosevelt administration’s intentions. Ogden Mills, who had served as President Herbert Hoover’s treasury secretary, observed that “it was not the maintenance of the gold standard that caused the banking panic of 1933 and the outflow of gold. . . . [I]t was the definite and growing fear that the new administration meant to do what they ultimately did—that is, abandon the gold standard.”[4] People naturally sought to get rid of their paper currency and to put their savings into something with more secure value—gold.

Gold as Contraband
Fear of devaluation spurred a panic, which Roosevelt invoked to justify seizing people’s gold. On April 5, 1933, Roosevelt commanded all citizens to surrender their gold to the government. No citizen was permitted to own more than $100 in gold coins, except for rare coins with special value for collectors. Morgenthau announced on the same day that “gold held in private hoards serves no useful purpose under present circumstances.”[5] Gold was thus turned into the same type of contraband as Prohibition-banned rum. Roosevelt announced, “Many persons throughout the U.S. have hastened to turn in gold in their possession as an expression of their faith in the Government and as a result of their desire to be helpful in the emergency.

There are others, however, who have waited for the Government to issue a formal order for the return of gold in their possession.”[6] To speak of the “return of gold” implied that government was the rightful owner of all the gold in the nation, and thus that no citizen had a right to possess the most respected store of value in history. Roosevelt assured the country: “The order is limited to the period of the emergency.” But the order stayed on the books until 1974.

Roosevelt labeled anyone who did not surrender his gold a “hoarder.” His executive order defined “hoarding” as “the withdrawal and withholding of gold coin, gold bullion or gold certificates from the recognized and customary channels of trade.”[7] Actually, Roosevelt was not concerned with the gold being in the “customary channels of trade”; instead, he wanted government to possess all the gold. And the notion that people were “withholding” their gold merely because they did not rush to the nearest Federal Reserve bank to surrender it was political logic at its best.

Roosevelt, in a later note to his Public Papers, justified the order because it “served to prevent the accumulation of private gold hoards in the U.S.”[8] Roosevelt used the same “hoarding” rhetoric against anyone who owned gold that Stalin used against Ukrainian peasants who sought to retain part of their wheat harvest to feed their families. But while Stalin sent execution squads to kill peasants who had a few bushels of grain hidden in their hovels, Roosevelt was kinder and gentler, seeking only ten-year prison sentences and $250,000 fines for any citizen who defied his edict and possessed more than five Double Eagle gold coins.

Roosevelt was hailed as a visionary and a savior for his repudiation of the government’s gold commitment. Citizens who distrusted the government’s currency management or integrity were branded as social enemies, and their gold was seized. And for what? So that the government could betray its promises and capture all the profit itself from the devaluation it planned. Shortly after Roosevelt banned private ownership of gold, he announced a devaluation of 59 percent in the gold value of the dollar. In other words, after Roosevelt seized the citizenry’s gold, he proclaimed that the gold would henceforth be of much greater value in dollar terms.

Citizens who had desired to hold gold as a hedge against government inflation policies were completely vindicated. FDR’s administration subsequently did everything possible to inflate prices, foolishly confident that a mere change in numerical prices would produce prosperity. Citizens had accepted a paper currency based on the government’s pledge to redeem it in gold at $20 per ounce; then, when Roosevelt decided to default on that pledge, he also felt obliged to turn all citizens holding gold into criminals. Roosevelt stated that the ban on private ownership “was the first step also to that complete control of all monetary gold in the United States, which was essential in order to give the Government that element of freedom of action which was necessary as the very basis of its monetary goal and objective.”[9] But the primary “freedom” government acquired was the freedom to default on its promises and to manipulate the lives of everyone depending on U.S. dollars in their daily transactions.

Curiously, FDR retained his denigrating tone toward so-called gold-hoarders even after he defaulted on the federal government’s gold redemption promise. Even though people who distrusted politicians’ promises were vindicated, they were still evil people because they had not obeyed FDR’s demand to surrender their gold. In the moral world of the New Deal, justice consisted solely of blind obedience to political commands. FDR had absolutely no sense of embarrassment or shame after he defaulted on the federal government’s gold promises—it was simply political business as usual.

Senator Carter Glass of Virginia, chairman of the Senate Finance Committee, denounced the gold seizure: “It’s dishonor. This great government, strong in gold, is breaking its promises to pay gold to widows and orphans to whom it has sold government bonds. . . .”[10]

Free to Inflate
The refusal to convert paper dollars into gold meant that the government was “free” to flood the country with paper money and sabotage the currency’s value. The stability of the value of currency is one of the clearest measures of a government’s trustworthiness. Before Roosevelt took office, Americans clearly recognized the moral implications of inflation. Vice President Calvin Coolidge had bluntly declared in 1922: “Inflation is repudiation.” Inflation is a tax whereby government prints extra money to finance its deficit spending. The value of money is largely determined by the ratio of money to goods; if the quantity of money increases faster than the increase in the amount of goods, the result is an increase in the ratio of money to goods and an increase in prices. Thus, the government’s printing presses devalue people’s paychecks and effectively allow government to default on the value of its debt.

The threat of inflation was invoked in the early 1940s to justify imposing payroll tax withholding[11] (protecting people from their own paychecks) and in the 1970s to impose price controls over the entire economy. Apparently, politicians who decide to flood the money supply automatically become entitled to increase their coercion of their victims who hold increasingly worthless currency.

Since Roosevelt banned citizens from owning gold in 1933 and forced people to rely on the unbacked promises of politicians for the value of their currency, the dollar has lost about 93 percent of its purchasing power.[12] The collapse in the dollar’s purchasing power severely disrupted the ability of scores of millions of Americans to plan their own lives and save for retirement. If someone proposed a law to give government the right to explicitly default by 2 to 3 percent a year on all its debts, the proposal would be widely denounced. Yet, this is what the government has been doing for decades. Though inflation has slowed since 1980, the purchasing power of the dollar has fallen by over 50 percent in subsequent years according to the government’s own numbers (which slightly exaggerate the damage to the dollar), making a mockery of people’s attempts to calculate and save for the future.

A 1997 study by Congress’s Joint Committee on Taxation found that because of how capital gains taxes are calculated, many citizens are forced to pay taxes on investment “gains” when in reality they have suffered losses due to the deterioration of purchasing power.[13]

Roosevelt’s gold seizure was based on the doctrine that in order for government to save the people, it must be permitted to breach all the promises it made to the people. According to modern conventional wisdom, government has no obligation to do justice or treat any specific individual citizen fairly—instead, government’s only duty is to achieve “social justice” or some other abstraction perfectly suited for evasion.

12.For information on the deterioration of the dollar’s purchasing power, see the Web site of the U.S. Bureau of Labor Statistics at http://www.bls.gov/cpihome.htm.