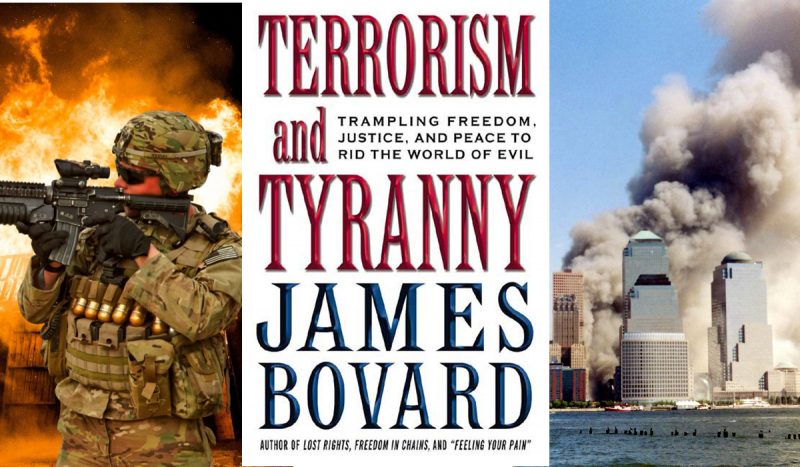 Here is a round-up of some of my epigrams on the War on Terror. I tweaked a few lines for this repost and I may have missed or forgotten other lines that I should have included.  I welcome any suggestions to add (or delete) for this list.

Investors Business Daily, October 2, 2001: Like a phoenix rising from the ashes, Americans’ trust in government is soaring after the Sept. 11 terrorist attacks.

The blind glorification of government, now so popular, puts almost all liberties at grave risk.

Reason, December 2001: The best hope for the survival of liberty is for Americans to recall the history lessons that public schools never teach.

USA Today, January 10, 2002: The war on terrorism quickly became a license for tyranny.

The word “terrorism” must not become an incantation that miraculously razes all existing limits on government power.

The word “terrorism” must not become an incantation that miraculously razes all limits on government power.

The United States is suffering more from political exploitation of terrorism than from terrorists.

Nothing happened on 9/11 to make the federal government more trustworthy.

Mises Institute, August 11, 2020: The more oppressive the government acted after 9/11, the more slavish the press became.

Many politicians still believe that there is no problem that cannot be solved by a bigger federal iron fist.

American Conservative, March 8 2021: “Terrorism” has spurred deluges of political and prosecutorial malarkey for 20 years. Any new crackdown on terrorism will turn into a numbers game in which justice and fair play don’t have a snowball’s chance in hell.

American Conservative, July 22, 2021: After January 6, the de facto definition of terrorism seems to be “anything that frightens politicians.”

Mises Institute, September 6, 2021: After 9/11, anyone who denied “they hate us for our freedoms” automatically became an enemy of freedom.