Amtrak trended on Twitter yesterday as Team Biden hypes the president’s devotion to taking the train – thus proving that soaring gas prices should not bother patriotic Americans. After a bumbling train trip from New York to Washington, I wrote the following smackdown for the Detroit News and a few other publications. (New York City Tribune published the full version of the piece reposted below.)  Amtrak offered Metroliner service for a hefty price (Acela did not start until 2000) but I took the non-premium train. Amtrak has long disdained travelers who weren’t paying top dollar for a ride in the Northeast corridor.

Also attached below is a JPEG of a 1985 bash I did on Amtrak for the Philadelphia Inquirer. That article outraged Amtrak union members who persuaded the op-ed editor to banish my pieces from that paper. What the heck, I’m still zapping the feds.

Why did I take Amtrak? My therapist said it would be good for me – that it would mollify my feelings of contempt for government – and that it would give me a new appreciation for politicians’ wisdom and benevolence.

So, at 5 p.m. last Monday, I ambled into Penn Station in New York City to catch the Amtrak “Minuteman” train to Washington. The train was due to leave at 5:20. I figured I should be there a few minutes early to board and relax on the train.

But the train had trouble in Connecticut, and until 6:15, the Minuteman notch on the Departures Board was decorated with a little sign announcing “Delayed Five Minutes.” This was very fortunate, because some passengers who arrived late to Penn Station might otherwise have missed their train.

Like a wise long-distance runner carefully pacing himself, the Minuteman limped out of Penn Station, stopping each quarter mile so that people could admire the scenery in the train tunnel. Many philistines think that all train tunnels are all alike, but the ones in New York City are especially colorful. Except the tunnels were dark so it was a little hard to appreciate them.

The train kept gaining speed throughout the trip. After ten miles, we passed an old lady in her walker. At 25 miles, we left a girl on a three-speed bike in the dust. And at 40 miles, we burst into the open, blasting past a pick-up truck, a moped, and a 1963 Volkswagen.

Actually, the lethargic pace gave us a chance to enjoy the scenery of Northern New Jersey – the Hazardous Waste Capital of the Free World. And the train’s constant speeding up and slowing down nicely simulated the rhythms of the womb, putting passengers in a tranquil state where they almost lost all sense of time.

The air conditioning in our train car was kaput, and several people happily fantasized that it was a cold winter night and they sat next to a roaring campfire soaking up the warmth. In all fairness, no one succeeded in frying an egg on the metal ends of the arm rests.

I mentioned to an Amtrak employee that the train was over an hour and a half late. The conductor looked deeply contemplative, gazed off in the distance, and replied,” “If you are only thinking of here – of this little pinpoint on the Great Planet Earth – that is true. But if this train was in Denver -in the Mountain Time Zone – it would be almost half an hour early. Have a good day.”

The train had a single snack bar and 25 customers waiting in line.  It was staffed by a McDonald’s reject who refused to hand a Sawdust Special Hot Dog to any customer before spicing the mystery meat with an interminable exposition on the latest meteorological tendencies. That guy was not significantly more comatose than your average fed.

North of Philadelphia, the train hit peak speed and passed a Postal Service “Express Mail” truck. But the triumph was dimmed because the Postal Service truck was running on a flat tire.

“We apologize for the delays. They were beyond our control,” the announcer explained as we loitered into Philadelphia. Amtrak management is willing to take full responsibility – but if there are hurricanes, or earthquakes, or mechanical failures, no one can quarrel with acts of God.

There was a solemn hush among passengers as the train clunked into Union Station in Washington roughly five hours after scheduled departure from New York. This was very meaningful historically, since five hours was the same duration of the first New York-Washington train trip in 1847. Many passengers choked back the tears as they reflected on their solidarity with those early American pioneers who helped make this country great.

Christening that train as the “Minuteman” was like Amtrak attaching a huge “Kick me!” sign. Or perhaps that name was simply kind-hearted charity to the cheap shot artists of the world. (Thanks, Dudes!)

Of course, not all Amtrak trains are late. In the lobby of Amtrak’s lavish Washington headquarters, there is a granite plaque with gold embossing attesting that a New York-Washington train arrived on time on October 22, 1984. This is an incontrovertible refutation to all those cynics who swear that Amtrak is innately incapable of running its trains on time.

Besides, nobody is perfect. 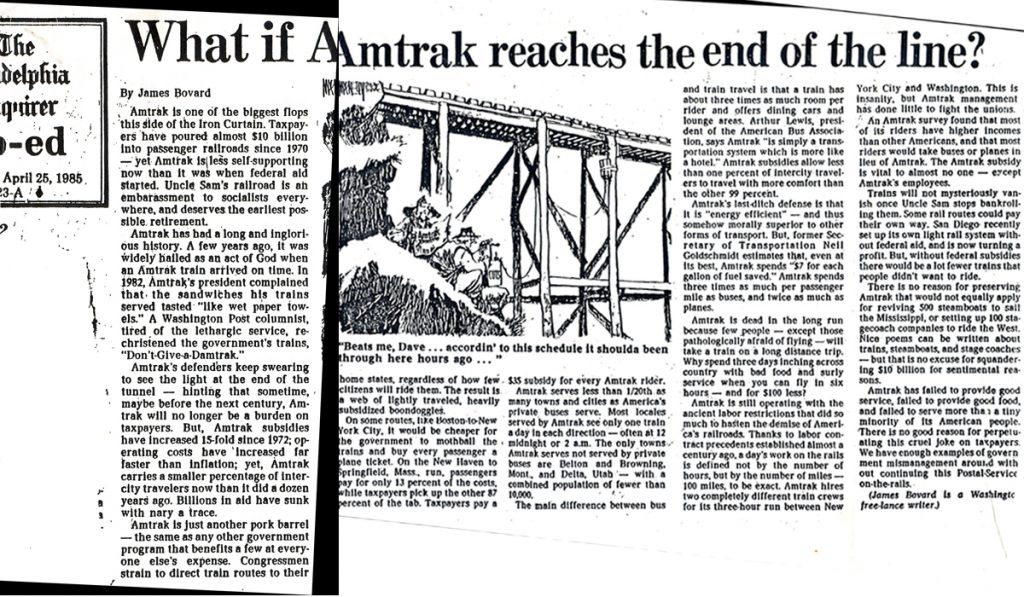 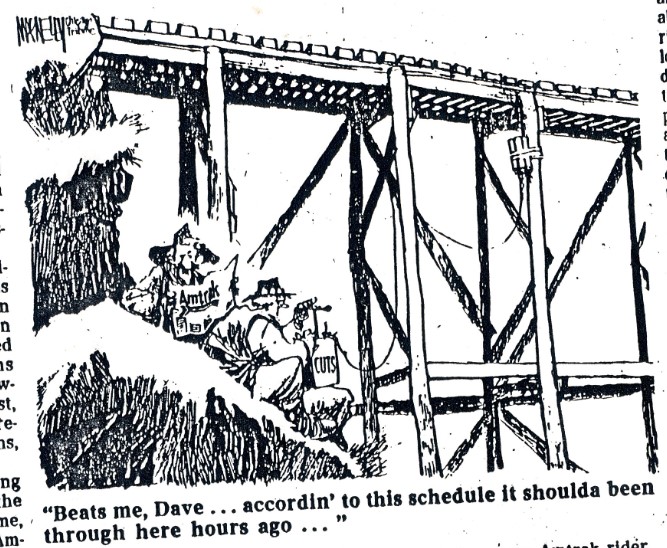 Here’s a larger size of the great Jeff MacNelly cartoon of OMB chief David Stockman waiting to blow up the railroad bridge. Stockman targeted Amtrak and many other boondoggles for spending cuts that Congress mostly rejected.

3 Responses to Lampooning Amtrak in the 1980s