On the Ground at DC’s Pro-Assange Protest 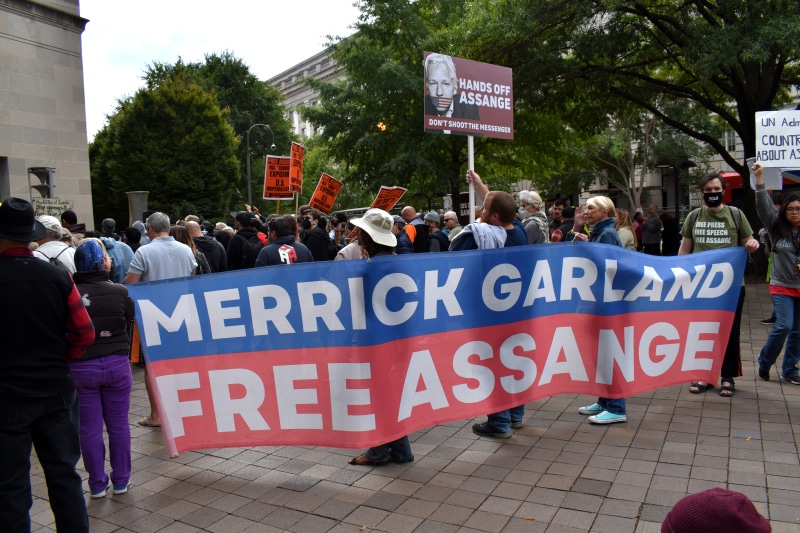 On Saturday, protests supporting freedom for Julian Assange erupted around the world. In London, 7,000 protestors linked hands to surround the Parliament building, demanding that the United Kingdom not extradite Assange to the United States for a show trial. Protests also occurred in several American cities, including Denver, Colorado, where Kyle Anzalone, the Libertarian Institute’s news editor, spoke.

A protest also occurred on a corner of the block housing Justice Department headquarters in downtown Washington DC. The event commenced with attendees carrying a long yellow “Free Assange” banner around the Justice Department. Perhaps 150 people came out to support the cause on a windy, overcast, chilly day. Most of the speakers and almost all the attendees were left-leaning, if not full-blooded socialists. Jill Stein, former two-time Green Party presidential nominee, opened the protest with a spiel linking Assange to a litany of other causes. Some speakers were borderline mystifying, including a guy from Haiti whose French accent was so heavy that closed captions were needed to follow his points. 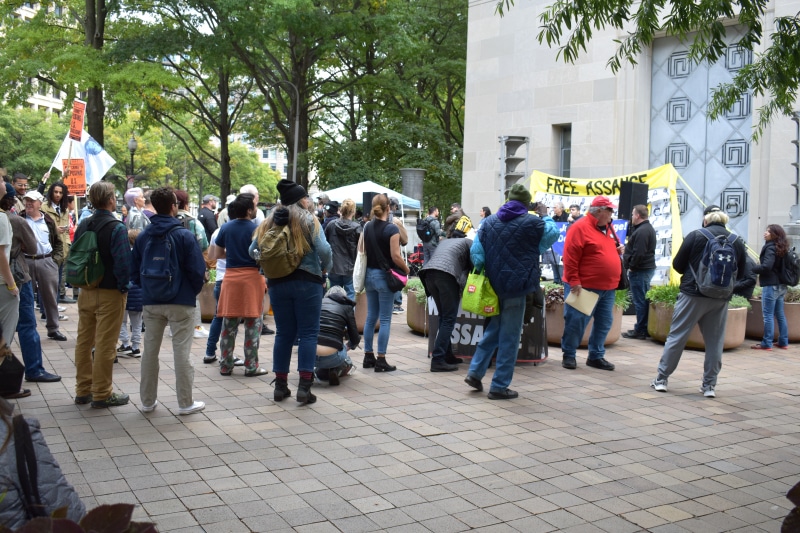 Scott Ritter, a former Marine Corps officer and U.N. weapons inspector, gave an impassioned speech linking Assange’s situation to the 1971 Pentagon Papers case. Ritter declared that the Supreme Court decision in that case would never allow the government to use secrecy as an excuse to suppress free speech. This is aspirational since the Supreme Court decision did not go nearly that far. But nuances tend to be scarce at protest events.

Matthew Hoh, a Marine Corp officer combat veteran and one of the most eloquent opponents of American warring, spoke passionately about how Julian Assange gave a voice and a name to the innocent people killed in U.S. wars since 9/11 and prevented them from “being lost to history.” The sound system mysteriously died during his presentation so he switched to a megaphone without missing a beat. Hoh concluded, “If they dare bring Julian here to the United States, we will meet him and we will meet them and we will set him free.”

Antiwar.com’s Dave DeCamp gave the best foreign policy speech of the day, walking listeners through the long road of debacles that have led the world to the brink of a nuclear conflict between the U.S. and Russia. DeCamp observed that foreign policy disasters have occurred “because we don’t have more people like Assange.” He called for more Wikileaks-style dumps of emails from government agencies on U.S. involvement in the Ukraine-Russia conflict. 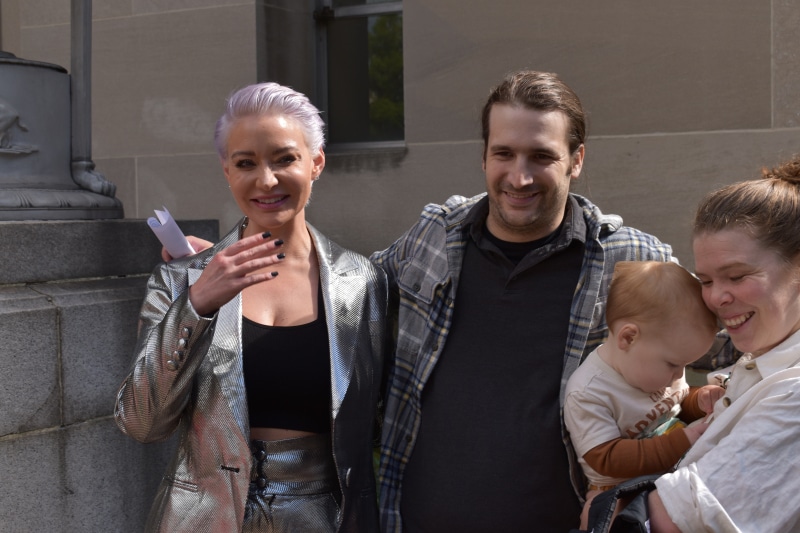 Spike Cohen, the 2020 Libertarian Party vice presidential nominee, fired up the crowd with a litany of denunciations of the U.S. government. “Julian wasn’t trying to help dictatorships – he was trying to stop the United States from becoming one and that is why they want him in jail.” He also slammed the media for failing to cover the event, a common theme at the podium.

I spoke for a few minutes early during the protest:

There’s an old saying—if exposing a crime is a crime, then you’re being ruled by criminals.

Except for Joe Biden.

Except for Merrick Garland

Except for Christopher Wray—well, maybe not.

I wanted to make sure those caveats get added to my dossier.

One lady in a wheelchair hollered: “What about Trump?”

Geez, it wasn’t like I was wearing a MAGA hat. I continued:

Four years ago, I wrote a piece for USA Today saying that, instead of a federal indictment, Julian Assange deserves a presidential Medal of Freedom.

Now, I don’t trust presidents, and I don’t like the notion of presidents giving Medals of freedom to their Pentagon tools like Robert McNamara, but I make an exception in Julian’s case…

After Britain arrested Assange on behalf of the U.S. government in 2019, Sen. Joe Manchin whooped that Assange “is our property and we can get the facts and the truth from him.”

Pervasive secrecy helps explain the collapse of trust in Washington. Americans today are more likely to believe in witches, ghosts, and astrology than to trust the federal government. We need more hellraisers like Julian Assange to save democracy from Leviathan.

Since the federal indictment against Assange was announced in 2019, numerous media organizations and nonprofit groups have protested his prosecution. A New York Times editorial declared that it was “aimed straight at the heart of the First Amendment” and would have a “chilling effect on American journalism as it has been practiced for generations.”

Unfortunately, few Americans and seemingly even fewer editorial writers are aware of how far the Iron Curtain has stretched to shroud U.S. foreign policy.

Beginning in 2013, the Obama administration began covertly providing money and weapons to Syrian rebels fighting the government of Bashar Assad. Much of the U.S. aid ended up in the hands of terrorist groups, some of whom were allied with Al Qaeda. After Trump tweeted derisively about the program in 2018, a journalist filed a Freedom of Information Act request for documents on CIA payments to rebel groups. A 2020 federal appeals court declared that the records must be kept secret because the court owed “appropriate deference” to the CIA. The judges neglected to cite the provision in the Constitution that obliged them to kowtow.

Syrians know that CIA-backed rebels have wreaked havoc, killing women and children. But federal judges insist on blindfolding Americans to the crimes they are helping finance. The selective censorship is reminiscent of the perpetual falsehoods about the Vietnam War that were exposed in the Pentagon Papers. As philosopher Hannah Arendt wrote, “The policy of lying was hardly ever aimed at the enemy but chiefly if not exclusively destined for domestic consumption, for propaganda at home and especially for the purpose of deceiving Congress.”

The propaganda has been gushering out during the Ukraine-Russia war. But some Washingtonians are recognizing how the government is handicapping itself by creating trillions of pages of secrets each year—secrets that government agencies routinely keep from each other. 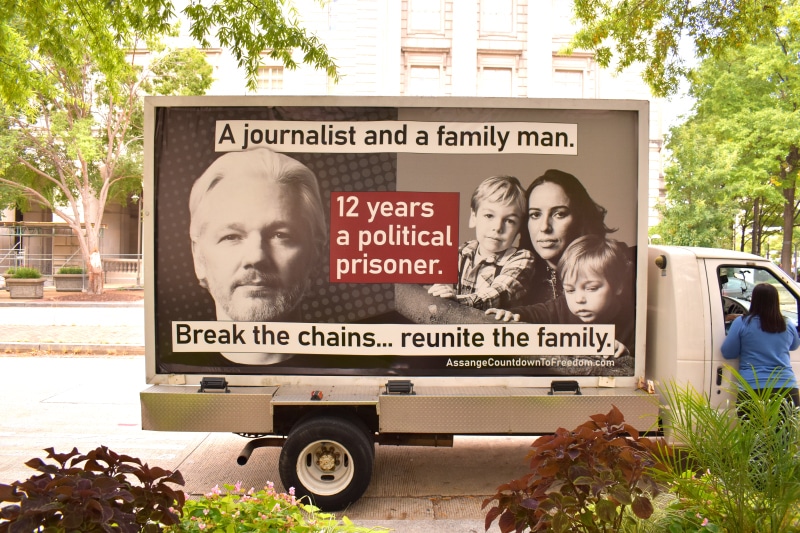 According to Politico, the Biden White House is launching a “new war on secrecy” and is especially concerned about “potentially illegal [government] activities that have been shielded from the public for decades.” A Biden administration official, speaking anonymously, declared that it is in the “nation’s best interest to be as transparent as possible with the American public.” Sen. Elizabeth Warren (D-MA) recently commented, “We spend $18 billion protecting the classification system and only about $102 million…on declassification efforts…That ratio feels off in a democracy.” But inside the Beltway, rigging the game 176-to-1 is “close enough for government work” for transparency.

The protests in Britain put more heat on the fragile new government there than activists’ efforts on this side of the Atlantic. It will be most unfortunate if Julian Assange’s fate hinges on politicians’ sense of decency.