Musing how Bush’s war on terror and invasion of Iraq ten years ago changed the world… Here’s one of my old fav pieces first published in 2006 by the Future of Freedom Foundation, supplemented with a few photos I took. When I visited the Tower of London, I was mesmerized by Traitor’s Gate. I wondered how broadly that governments would define “traitor” in the following years….

My Time in the Tower of London

I visited the Tower of London in May [2006] on an overcast, dreary Friday afternoon. The home of so many famous executions and king-approved murders is kept in spiffy shape. The tour guide — a former British sergeant-military wearing a large “Beefeater”-style hat — regaled listeners with tales of beheadings gone wrong, drunks with axes hacking away at half-dead corpses, never quite getting a clean cut. Some of the lines of stone near the castle were remnants of the Roman conquest of England. The castle itself was begun in earnest in 1066, just after the Norman conquest of England. Within a few centuries, the castle went from being a symbol of foreign occupation to a symbol of legitimacy. By overshadowing the London landscape, the Tower put fear into the heart of anyone who considered resisting royal authority — no matter how murderous the king’s henchmen became.

The tour guide pointed to Traitor’s Gate — where he said the most notorious criminals were brought directly from the Thames River into the Tower. The Traitor’s Gate was an easy way to secretly bring detainees into the Tower, unseen by anyone nearby. But looking at English history, it is difficult to detect a bright moral line separating those who were crowned at Westminster Abbey and those beheaded in the Tower of London. As usual, politically defined morality teaches that the good guys kept their heads. 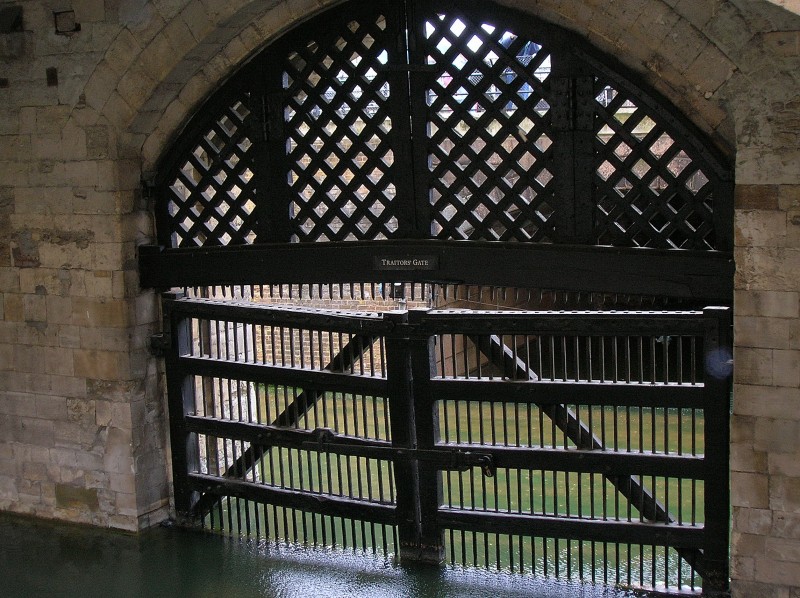 In the yard of the Tower castle was a dark brown sign engraved, “Torture at the Tower.” Visitors could push a button and hear about the long history of atrocities — of the thumbscrews and boots used during the 1300s, to more advanced methods used in following centuries. The Tower had a fearsome reputation in large part because of the unmitigated brutality that was inflicted in the name of the state.

The Tower was also on my mind as I reread Shakespeare’s Richard III recently. Midway through the play, the future King Richard accosts Lord Hastings (who had signaled that he would not support making Richard king) in the Tower. Richard declaimed that he had been bewitched by the widow of King Edward IV and the “harlot-strumpet Shore” (i.e., Jane Shore, Hastings’s lover).

Hastings responds, “If they had done this deed, my noble lord — ”

Richard replies, “If! thou protector of this damned strumpet, tellest thou me of ‘ifs’? Thou art a traitor: Off with his head!”

Richard specifies that he would not dine until he sees Hastings’s head.

In the next scene, the lord mayor of London arrives, and Richard deftly explains why he could not strictly follow “the form of law”:

What, think you we are Turks or infidels?
Or that we would, against the form of law,
Proceed thus rashly to the villain’s death,
But that the extreme peril of the case,
The peace of England and our persons’ safety,
Enforced us to this execution?

Richard condemned Hastings on the basis of an allegation that appeared completely bogus: Hastings’s refusal to instantly assent to the charge proved his guilt and clinched his fate.

Unfortunately, this has overtones of how the U.S. Defense Department will decide the fate of detainees seized anywhere in the world in the name of anti-terror — or at least in the name of George W. Bush. 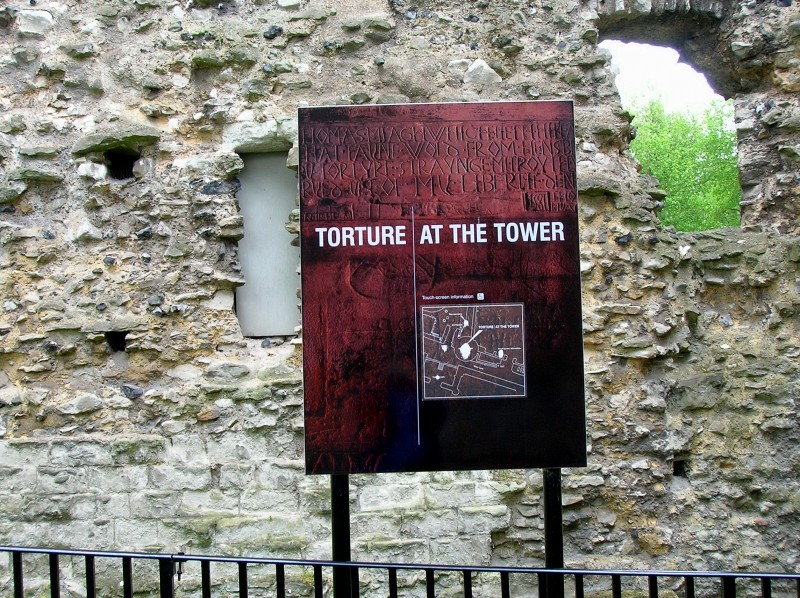 By act of Congress, the Defense Department is entitled to use accusations ginned up by torture — as long as the torture occurred before December 30, 2005, the date that President Bush signed the Detainee Treatment Act of 2005. Bush appended a Signing Statement to the bill in which he proclaimed his right to ignore the key provision of the law. But no matter.

Admittedly, it has been a long time since a civilized nation permitted the wholesale introduction of tortured information into judicial proceedings, even for its kangaroo courts. Congress has an “out” in the law that permits the military judges to declare that the method of interrogation is so extreme that the “information” squeezed out the person tortured cannot be used in court.

However, Secretary of Defense Donald Rumsfeld will be personally in control of the process of selecting the judges. Rumsfeld launched much of the torture scandal himself by approving formerly banned interrogation methods for use in Guantanamo and Iraq.

The American heritage and torture

The American version of kingly justice does not involve beheadings with dinners delayed until severed heads are paraded around the room. But the reality is not much better to brag about. People have been condemned to indefinite confinement — brutally interrogated — sometimes killed — all on the scantiest of evidence.

Rather than a relic of dark bygone times, the Tower of London is now the symbol of contemporary jurisprudence and enlightened detention facilities — enlightened not because they incorporate humanitarian principles, but because they sanctify the concept of a supreme leader. The Tower of London used maximum intimidation in order to thwart challenges to kings who often had as much legitimacy as a pickpocket with a newly acquired purse.

Many people are stunned that the Bush administration has become a champion of using torture as one of the best ways to protect the homeland. An FBI agent complained on December 5, 2003, that the “torture techniques” used at Guantanamo Bay have “produced no intelligence of a threat neutralization nature.” Lt. Gen. John Kimmons, the Army deputy chief of staff for intelligence, declared this past September that “no good intelligence is going to come from abusive practices. I think history tells us that. I think the empirical evidence of the last five years, hard years, tells us that.”

But this does not mean torture is barren for purposes of state. As Juan Cole, a University of Michigan history professor and an expert on the war on terrorism, observed, “Torture is what provides evidence for large important networks of terrorists where there aren’t really any, or aren’t very many, or aren’t enough to justify 800 military bases and a $500 billion military budget.”

One of the most striking elements of the last five years is the government’s pathetic batting average regarding those alleged to be terrorists. The vast majority of the people that the government has accused of being terrorists or labeled as terrorist suspects have turned out to be not guilty as charged.

This has often proved embarrassing. And this may be where torture comes in. Cole asks, ” How do you prove to yourself and others a big terror threat that requires a National Security State and turn toward a praetorian society? You torture people into alleging it. Global terrorism is being exaggerated and hyped by torture just as the witchcraft scare in Puritan America manufactured witches.” Cole explains, “Bush needs torture … to generate false information that exaggerates the threat to his regime, so as to justify repression. He needs the ritual of confession and naming others, to have it down on paper so he can show it to Congress behind closed doors.”

“Judicial murder” is the quaint term often used to describe killings that occurred at the Tower under the secret orders of the king or his ministers. And what is the equivalent term for the Bush era?

Unfortunately, few Americans yet realize what a radical departure the Bush administration has made in the last few years.

Can anyone imagine how the discussion would have gone if someone had proposed erecting an “American Tower of London” when the Founding Fathers met in Philadelphia in the dog days of 1787?

There was never any such tower in American lore. There was no notorious place where the enemies of the regime were beheaded or murdered behind closed doors. There was no Tower of London in part because America was born a nation under the rule of law.

There was no Tower of London because the Founders made sure that the crime of treason was very narrowly defined. They had seen how the crime of “treason” had mushroomed time and again in English history, creating the pretext to slaughter those who protested oppression.

There was no Tower of London in this nation because torture was not part of the American canons. Gross abuses occurred, especially of slaves and Indians. But Americans prided themselves on having left barbarism behind them when they emigrated from Europe.
Legalizing torture

However, in late September 2006, Congress voted to effectively legalize torture and to pardon all the torturers and torture policymakers. Has the U.S. Capitol building acquired at least an odor of the Tower of London?

Of course, there is no torture room in the basement of the Capitol where critics are dragged and taught to never sneer again at Democrats or Republicans. But the law that Congress passed will be a cornucopia of barbarity that will be likely to afflict people around the world.

“If we told you, we would have to kill you.”

That is the extent of citizens’ rights.

During the 1500s, heretics were often burned alive in the fields outside of the Tower of London. This was more barbaric than the treatment of most detainees inside the castle, but history has downplayed the torched dissenters because few of them were of royal blood.

After I finished touring the Tower walls and buildings, I sat down on a bench to contemplate history and chaw on a cigar. A middle-aged British couple sat down next to me. We began talking of the war in Iraq, and they said they were happy to meet an American who was outspoken against U.S. policy.

I smiled and said that I was probably not quite in the mainstream of American opinion. I mentioned that I was a journalist visiting London for a television interview.

“Oh — who is the interview with?” asked the guy, who seemed solidly middle class, except for his teeth.

The couple jumped up and fled as if they feared someone was about to set afire embers beneath their feet.

At least Muslims or those suspected of sympathy with Muslims are not being torched in Britain or the United States — yet. But no one can know how the absolute power that Congress sought to grant Bush will be used in the coming months and years. And if the Bush team decides to ratchet up the repression, Muslims and Muslim sympathizers will merely be the launch pad. 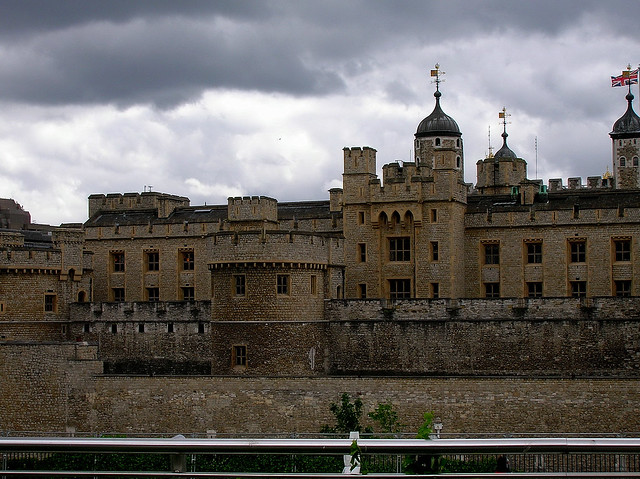