BOVARD: A bitter lesson from ‘the best and the brightest’

Boston children were sacrificed on the altar of equality

The Boston School Committee announced last week that it will finally end almost 40 years of forced busing — long after the policy effectively wrecked local schools. Forced busing in Boston and elsewhere presumed that schoolchildren are cannon fodder for the visionary schemes of judges, politicians and others. While the era of forced busing is coming to an end, politicians and bureaucrats retain far too much power over schoolchildren.

In May 1974, Boston residents voted 15 to 1 against busing schoolchildren to achieve racial integration. A month later, U.S. District Judge Arthur Garrity ignored the popular vote and made himself czar of Boston schools. Garrity effectively decreed that because the schools were supposedly unconstitutionally segregated, neither parents nor students nor anyone else had any rights. Garrity ordered the speedy imposition of a “master plan” that he later admitted he had not bothered to read. The judge scorned a proposal to rectify racial disparities by permitting parents to voluntarily send their children to schools in other neighborhoods.

Forced busing was the equivalent of throwing a bomb into a classroom. Under Garrity’s decree, schools in Roxbury, a poor black area, and South Boston, a poor white Irish area, were merged. The New Republic noted in 1983 that “the early years of busing [in Boston] furnished to the student passengers an educational experience of value only to those aspiring to careers in urban guerrilla warfare.” The National Guard was called out to restore order in Boston after violent public protests and racial clashes in the areas around the schools. Even the 82nd Airborne Division was put on alert for Boston duty.

Violence within schools also soared, and members of the Boston School Committee denounced the busing program for causing “bloodshed and racial hatred.” Boston Mayor Kevin White banned all public meetings or gatherings of more than three people in South Boston to try to limit the opposition to busing.

I lived in a rundown Boston neighborhood in 1977 and 1978 and saw firsthand how forced busing embittered many people. Having been raised in rural Virginia, I was accustomed to relatively amicable race relations. I was stunned by the instant, burning hatred I sensed from some Boston blacks, and by the routine shouting of racial slurs in lower-class white neighborhoods.

Forced busing exemplified the local dictatorship of the “best and the brightest.” As Stephan and Abigail Thernstrom noted in their 1997 book, “America in Black and White“: “The plan that Garrity imposed upon the city was punitive in the extreme … . The judge’s advisers and the state Board of Education believed that those against whom it was directed — in their eyes, localist, uneducated and bigoted — deserved to be punished.”

There was far more enthusiasm among Boston elites for iron-fisted equalizing than for democracy. Harvard’s Center for Law and Education was co-counsel for the case that spurred Garrity’s power grab. The vast majority of college presidents in the Boston area embraced Garrity’s takeover of the schools. Professors rushed to enlist in the brain trust to centrally micromanage every classroom. Social scientists moved children around a chess board with the same alacrity that generals choose regiments for suicide charges. At the same time, almost all these equalizers made sure their own children were not pulled into the vortex.

After forced busing, academic achievement levels plunged. White enrollment fell almost 80 percent in the following decade. Garrity had originally decreed that any school that had less than 50 percent white enrollment was automatically illegitimate. By the late 1990s, the school system was seeking to impose a quota of at least 9 percent white students. Study after study concluded that forced busing in Boston and elsewhere failed to provide an academic boost to minority students.

Garrity’s decree presumed that black children could not mentally blossom unless white children were seated nearby. This completely ignored the long history of many all-black schools achieving excellent academic results, such as Washington’s Dunbar High School.

Boston’s busing regime rested on perpetual contempt for both students and parents. Even though there are only 13 percent white students remaining in local schools, almost two-thirds of students last year were bused away from their neighborhoods. Students were dragged out of bed at an ungodly hour — the busing started at 6:05 a.m. — for the glory of a long-dead judge’s vision.

Even though forced busing failed, Boston will retain Byzantine controls that stifle parents’ and students’ choice. The Boston School Committee rejected a proposal for a “walk-zone priority” that would have reserved half the slots in each school for children residing within a mile. Instead, children will be assigned to schools based on a convoluted algorithm devised by a Chinese grad student at MIT. The pursuit of social justice has become so arcane that no common citizen can be expected to understand it.

Boston’s busing debacle is a reminder of the danger of government power. While politicians love to speak of free public education, it is the parents who are paying much, if not most, of the bill for their children’s education. Yet paying for schooling indirectly effectively turns parents from buyers into beggars. Regrettably, there is no way that parents can sue the government officials who forcibly sacrificed their children on an altar of equality. 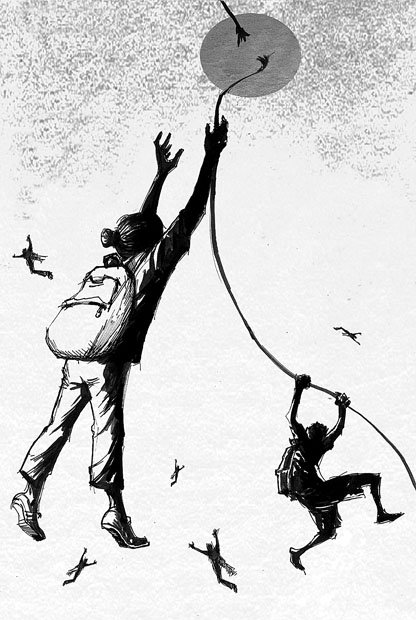