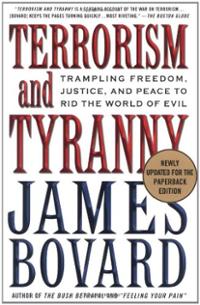 In honor of Bush’s library dedication today, here are some more epigrams he inspired from Terrorism & Tyranny (Palgrave, 2003)

The more information government gathers on people, the more power it has over them. The more government surveillance, the more intimidated Americans become.

In the long run, people have more to fear from governments than from terrorists. Terrorists come and go, but power-hungry politicians will always be with us.
****
For epigrams on freedom, government, & terrorism, click here.