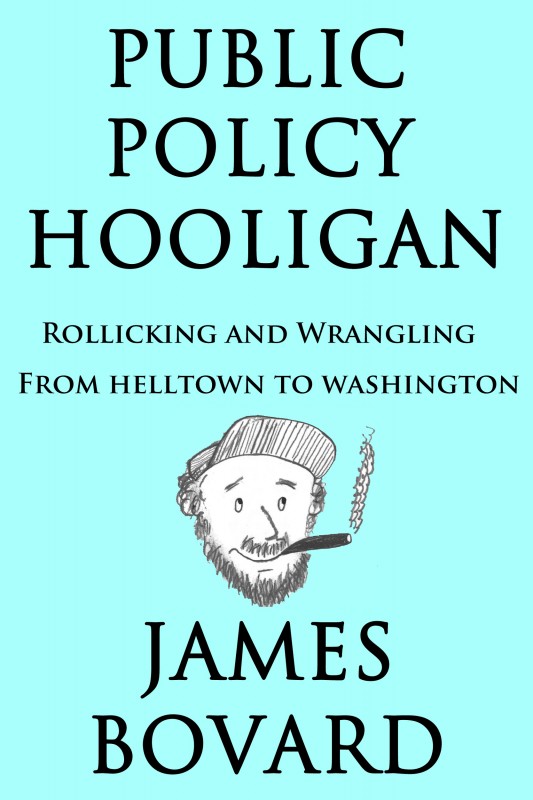 And he really is a hooligan, too. 😉
By Claire Wolfe “freedom writer”

Jim Bovard has written an amazingly cheerful memoir of how he went from being a good, authority-respecting Boy Scout to being the bane of D.C. policymakers and bureaucrats during the Clinton years.

Some might wonder how a book can be cheery despite being about Janet Reno, Louis Freeh, and other such gag-inducing personages, not to mention boatloads of some of the dumbest, most wasteful bureaucrats you’d ever want to avoid. The answer is: an irreverent sense of humor and a determined outsider’s perspective, coupled with a writing talent well honed by years of poking at politicians, their policies, and their pals.

Sample chapter titles give the idea: “Chasing USDA with a Pitchfork,” “Conspiring Against the Clinton Administration,” and “Flummoxing the FBI.”

Jim didn’t take the usual course to becoming a wonk. He didn’t graduate from the Ivy League. In fact, he didn’t graduate from anywhere; he dropped out. He didn’t arise from an intellectual urban environment but from the rural South. He made his way to D.C. not via scholarships, internships, or political connections, but by hitchhiking, working on road gangs, and bumming around Europe.

Still … somehow (it had to do with the Great Books, as he explains) he made it to Washington, where he promptly began bedeviling Authoritah.

Bottom line: even when his words make you mad, he’s usually also making you laugh. Or at least grin a little.