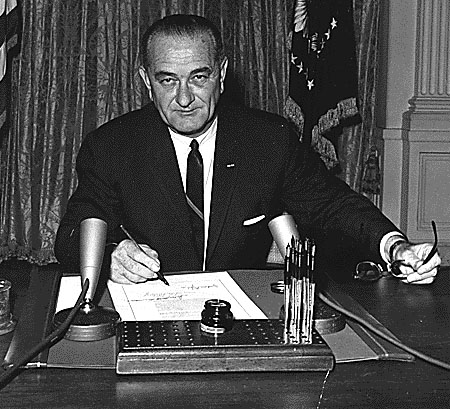 This is the 49th anniversary of Congress’s passage of the Gulf of Tonkin resolution, by which the Lyndon Johnson administration lied the nation into the Vietnam War.  The resolution was spurred by false assertions of multiple North Vietnamese attacks on U.S. ships.  At  a National Security Council meeting on the evening that the first report came in, Johnson asked, “Do they want war by attacking our ships in the middle of the Gulf of Tonkin?” CIA chief John McCone answered, “No. The North Vietnamese are reacting defensively to our attack on their off-shore islands. They are responding out of pride and on the basis of defense considerations.” The fact was that the United States had orchestrated an attack by South Vietnamese commandos on North Vietnamese territory before the alleged conflict began. But Johnson lied and commenced bombing, and Congress rushed to cheer him on.

Last night, President Obama appeared on the Jay Leno show and declared: “We don’t have a domestic spying program.”  He explained: “What we do have are some mechanisms where we can track a phone number or an email address that we know is connected to some sort of terrorist threat.”  Why would Obama continue to shovel such bilge?  Does he assume that no one has read a newspaper for the past 2 months, or what?

Here’s a review essay I wrote for the American Conservative  in 2011 on how government lying has become pervasive.

Politicians nowadays treat Americans like medical orderlies treat Alzheimer’s patients, telling them anything that will keep them subdued. It doesn’t matter what untruths the people are fed because they will not long remember. But in politics, forgotten falsehoods almost guarantee new treachery.

This new book by John Mearsheimer, coauthor of the courageous masterpiece The Israel Lobby, is a step toward remedying the academy and media’s disregard of political perfidy. Mearsheimer “concentrates on lies that are told in the service of the national interest. These strategic lies benefit the collectivity, unlike selfish lies, which benefit a particular individual or group of individuals.” He explains that “strategic lies can do good things for a country, although there is always the possibility that they will do more harm than good.” On the book’s own evidence, there’s more than a possibility.

Why Leaders Lie deals solely with foreign policy lies. Mearsheimer analyzes five different types: inter-state lies (to delude foreign governments), fearmongering (deceiving the citizenry by exaggerating a foreign threat), strategic cover-ups (such as denying military and other debacles), nationalist myths (dissimulating about the nation’s sordid past), and “liberal lies” (such as denials about targeting foreign civilians).

Mearsheimer touts President Kennedy’s deceits regarding the Cuban missile crisis as an example of a successful strategic lie. In a secret deal with Khruschev, JFK agreed to withdraw Jupiter missiles from Turkey to sway the Soviets to remove their missiles from Cuba. JFK vehemently denied that any such deal was made at the time, and the agreement was kept secret for 30 years.

But the lies had repercussions. The apparent U.S. triumph in the Cuban missile standoff sanctified JFK and increased the arrogance of the Best and the Brightest. The successful con on Cuba probably spurred more brazen lying by the Kennedy administration on Vietnam—with disastrous results for the United States.

Mearsheimer discovers that while national governments lie to each other much less often than readers might presume, rulers are far more likely to deceive their own people. This is especially troublesome because democracy is far more effective at breeding gullibility than at leashing politicians. Lord Bryce, author of The American Commonwealth, observed in 1921 that “State action became less distrusted the more the State itself was seen to be passing under popular control.” The rise of democracy has enabled politicians to convince citizens that government poses no threat because they control its actions—or so the myth goes.

While some people regard political lies as negligible offenses, official deceits often prove fatal to foreigners. Mearsheimer quotes recent research concluding that “democracies are somewhat more likely than non-democracies to target [foreign] civilians” during wars. Why Leaders Lie examines the British government’s brazen falsehoods about the intentional slaughter of German civilians in RAF bombing raids during World War II. “The British government did not want to tell its public that it was purposely killing civilians, because this was a gross violation of the laws of war.”

Similarly, President Harry Truman told Americans in August 1945 that “the first atomic bomb was dropped on Hiroshima, a military base. That was because we wished in this first attack to avoid, in so far as possible, the killing of civilians.” But Hiroshima was actually a major city with more than a third of a million people prior to its incineration.

In recent times, the American media and Congress brushed aside almost all concerns about the slaughter of innocent people in Fallujah. Any cheery statement by a Pentagon spokesman was sufficient to prove that the U.S. military was blameless, regardless of how many Iraqi women and children were killed.

The lies of conniving politicians are compounded by kowtowing experts. In Washington, power is the highest truth. Credibility depends on titles, not veracity. Blind deference to authority might be expected from semi-literate peasants in some mountain hollow. But it is more of a problem coming from the academic elite and establishment heavyweights. Leslie Gelb, former president of the Council for Foreign Relations, admitted: “My initial support for the [Iraq] war was symptomatic of unfortunate tendencies within the foreign policy community, namely the disposition and incentives to support wars to retain political and professional credibility.” As Daniel Ellsberg declared in 1970, the Pentagon Papers provided thousands of pages documenting “twenty years of crime under four presidents. And every one of those presidents had a Harvard professor at his side, telling him how to do it and how to get away with it.”

Much of the mainstream media has long been happy to partner with Washington in deceiving the American people. Flora Lewis, a New York Times columnist, writing three weeks before 9/11, commented in a review of a book on U.S. government lies about the Vietnam War: “There will probably never be a return to the discretion, really collusion, with which the media used to treat presidents, and it is just as well.” But within months of her comment, the media was as craven as ever. The Washington Post and the New York Times made it easy for Bush to con the nation into an unnecessary war against Arabs.

Mearsheimer deftly recounts some of the premier Bush administration lies paving the way to attacking Iraq. The administration was staffed with whiz kids whose philosophical training persuaded them to rise above mere facts. Many of the most prominent advocates of the Iraq War, such as Paul Wolfowitz, were devotees of Leo Strauss, renowned as a “philosopher of the noble lie”—on the assumption that truth is only for the elite.

One of the primary sources of misinformation that spurred the U.S. invasion of Iraq was a newly created Pentagon policy shop called the Office of Special Plans. Its director, Abram Shulsky—who received his doctorate under Strauss—co-wrote a 1999 essay that declared that Strauss “alerts one to the possibility that … deception is the norm in political life.” Professor Shadia Drury, author of Leo Strauss and the American Right, notes that Strauss believed that “those who are fit to rule are those who realize there is no morality and that there is only one natural right—‘the right of the superior to rule over the inferior’.”

Politicians get away with lies in part because Americans are taught that anyone who disbelieves the government must be crazy—the same view the KGB took of Soviet dissidents in the 1970s. This prejudice was canonized in the work of former communist and Ivy League professor Richard Hofstadter’s The Paranoid Style in American Politics. Top-ranking government officials exploited that notion to help deceive Americans into submission. At the time of the Gulf of Tonkin incident, Defense Secretary Robert McNamara declared that it is “inconceivable that anyone even remotely familiar with our society and system of government could suspect the existence of a conspiracy” to take the nation to war on false pretenses.  (After his retirement, McNamara joined the Washington Post’s board of directors. So much for telling “truth to power.”)

Lies subvert democracy by crippling citizens’ ability to rein in government. Citizens are left clueless about perils until it is too late for the nation to pull back. As Hannah Arendt noted, during the Vietnam War “the policy of lying was hardly ever aimed at the enemy but chiefly if not exclusively destined for domestic consumption, for propaganda at home and especially for the purpose of deceiving Congress.” CIA analysts did excellent work in the early period of the Vietnam conflict. But “in the contest between public statements, always over-optimistic, and the truthful reports of the intelligence community, persistently bleak and ominous, the public statements were likely to win simply because they were public,” she observed.

Unfortunately, Why Leaders Lie does not provide a clear standard for judging official deceit. Should we presume that “good government” is when politicians lie to the people for the public benefit and “bad government” is when politicians lie for selfish interests? How can we distinguish between the two? We have to trust politicians to tell us which is which. According to Mearsheimer, if a leader is not lying about foreign policy for “selfish purposes” (such as “their own personal interests or those of their friends”), then he may deserve the benefit of the doubt.

Political lies are far more dangerous than most political scientists recognize. Big government requires Big Lies—and not just about wars but across the board. The more powerful centralized administration becomes the more abuses it commits and the more lies it must tell. The government becomes addicted to the growth of its own revenue and power—and this growth cannot be maintained without denying or suppressing the adverse effects of Leviathan’s growth.

The more power government seizes, the more easily it can suppress the truth. The Obama administration’s aggressive use of the “state secrets” doctrine to cover up the U.S. government’s involvement in torture and other high crimes is typical of how the game is played in Washington. WikiLeaks has proven that U.S. foreign policy is far more dishonest than was commonly believed. Unfortunately, Americans have no legal way to commandeer government files until long after most power grabs are consummated.

Even so, both Bill Clinton and George W. Bush were re-elected long after their chicaneries became obvious to attentive observers. But if people are content to be deceived, elections become little more than patients choosing which nurses will inject their sedatives. If the citizenry does not punish liars, then it cannot expect the truth. And the more arbitrary power the U.S. presidency possesses, the more it attracts the type of politician who will not hesitate to lie to capture office.

There is no reason to expect government to be more honest in the future than it has been in the past. The Obama administration’s lies on Libya are eerily akin to the Bush team’s lies on Iraq and the Clinton administration’s lies on Kosovo. But deceiving the American people should no longer be treated as a victimless crime. Why Leaders Lie is a potent reminder of the perils of letting politicians rule by deceit.

Tagline: James Bovard is the author of Attention Deficit Democracy and eight other books.

Me? Nihilist? Another NSA Slander
Nixon’s Resignation & the Era of Lawless Presidents

2 Responses to Obama, NSA, Gulf of Tonkin, & Governing as Lying