BOVARD: Why everyone scorns the TSA

In the wake of last Friday’s shootings at Los Angeles International Airport, some politicians and media commentators are feigning shock at the widespread hostility toward the Transportation Security Administration (TSA). There was no justification for the shooting suspect, Paul Ciancia, to gun down three TSA agents on the job, killing one. Ciancia’s brutal rampage, though, should not obscure the fact that the TSA has perennially pushed many Americans to the breaking point.

In 2010, TSA speeded up deployment of its whole-body scanners in the wake of pervasive U.S. government security failures that permitted a young Nigerian to board a Detroit-bound plane in Amsterdam with 80 grams of powdered explosive in his underwear. The agency claimed that the new scanners were necessary to protect against powdered explosives, but the Government Accountability Office warned that it “remains unclear” if the new scanners could detect such threats.

As the TSA began touting its new “see-all” scanners, many Americans objected to having a “birthday suit” photo placed in their federal dossier. Many travelers also feared the perils of getting regularly radiated by Uncle Sam, and such fears were fed by the TSA’s refusal to disclose key safety data on how the scanners worked. An investigation by the Public Broadcast Service’s “Newshour” and ProPublica revealed that the scanners could cause up to 100 cancer cases per year among travelers. Citing health and privacy concerns, theEuropean Union banned all body scanners that rely on radiating travelers.

As USA Today noted in October 2010, “The new searches … require screeners to touch passengers’ breasts and genitals.” An elementary-school teacher complained to The New York Times that she was roughly handled after the body scanner “detected a tissue and a hair band in her pocket.” People who had been victims of sexual assault were especially traumatized by the new procedures.

While President Obama and top other federal officials publicly defended the TSA’s intrusive new searches, the program never made a lick of sense. When “enhanced pat-downs” began, whole-body scanners were deployed in only 69 of the nation’s 400-plus commercial airports. Would-be terrorists could simply go to airports that continued relying on magnetometers and nonpunitive pat-downs. The agency presumes that someone who is determined to commit suicide and wreak maximum havoc will be unwilling to drive 100 miles to some other airport that does not have whole-body scanners.

The TSA greatly exaggerated the effectiveness of the new scanners. After Rep. John L. Mica, chairman of the House Transportation and Infrastructure Committee, received a confidential briefing in 2012 on the scanners’ performance in tests, he condemned them as “badly flawed” and declared, “If we could reveal the failure rate [of the scanners], the American public would be outraged.” The agency had no excuse for groping millions of Americans.

Other TSA programs have also pointlessly harassed or subjugated Americans. Gerardo Hernandez, the TSA agent slain on Friday, was part of the agency’s “behavior-detection” program involving thousands of TSA agents who “chat down” passengers at airports and watch for “micro-expressions” that signal potential trouble. Though Mr. Hernandez may have been a model employee — competent, courteous and fair-minded — that program has failed to detect a single terrorist and has spurred the arrests of thousands of travelers.

More than 30 TSA agents complained in 2012 that the behavior-detection program at Boston’s Logan International Airport had become a “a magnet for racial profiling, targeting not only Middle Easterners, but also blacks, Hispanics and other minorities,” The New York Times reported. The agents relied on “terrorist profiles” such as black guys wearing baseball caps backward or Hispanics traveling to Miami. In Honolulu, some behavior-detection agents were nicknamed “Mexicutioners” for their proclivity for harassing Mexican travelers.

The behavior-detection squad at Newark Liberty International Airport in New Jersey engaged in such blatant stereotyping that it was derided as “Mexican hunters” by other TSA agents. Some behavior-detection officers complained that their supervisors pressured them to fabricate false charges against illegal aliens to justify reporting them to law enforcement. Last June, an inspector general slammed the behavior-detection program as a perennial flop, deriding the TSA for failing to develop “performance measures” or to “accurately assess” its effectiveness.

Exasperation with the TSA spurred many Americans to give up on relying on air travel, but the agency is now seeking to seize control over other forms of transit. The TSA spends $100 million a year on 37 teams that conduct almost 10,000 sweep searches a year at Amtrak stations, bus depots and even local transit. Anyone who refuses to submit to a warrantless search can be banned from traveling. The swaggering name of its roving squads — VIPR (Visible Intermodal Prevention and Response) — personifies the TSA’s attitude toward the American people. Newspapers often tout VIPR’s “show of force,” but it is a show seemingly intended to intimidate average Americans, not the terrorist suspects who do not exist in places such as Jackson, Miss.

People who are enraged at the TSA should recognize that some agents also oppose the needlessly oppressive practices that shred travelers’ privacy and dignity. We can condemn the shooting of TSA agents without exonerating agency policies that trample Americans’ constitutional rights. The Department of Homeland Security admitted in 2011 congressional testimony that “the large majority of travelers pose no security risks.” By treating most Americans like suicide-bombers-in-waiting, the TSA often makes traveling hellish without making it safer. 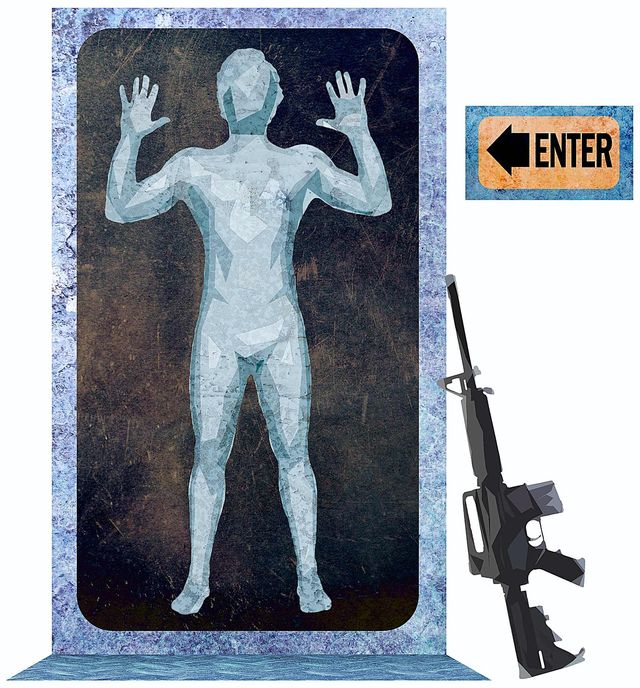 7 Responses to My Wash. Times Op-ed: Why Everyone Scorns the TSA