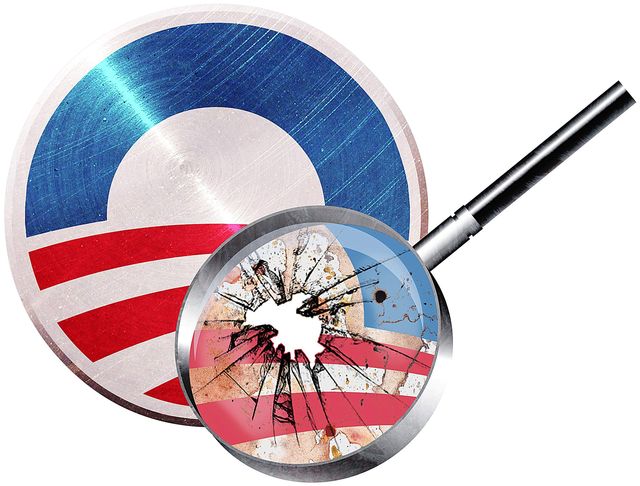 A Senate report last week revealed that the Obama administration utterly debilitated the inspector general for the Homeland Security Department. Charles Edwards, the acting IG from early 2011 till last December, toadied to Obama appointees at every opportunity — stifling reports, deleting damning findings and boasting of his chumminess with agency chieftains. Unfortunately, torpedoing oversight of the federal government’s largest nonmilitary department fits the administration’s template of suppressing evidence of its debacles far and wide.

In 2008, Sen. Barack Obama co-sponsored the Inspectors General Act of 2008, enacted to buttress the independence of agency watchdogs. That act required the president to give Congress 30 days notice and a statement of “sufficient cause” before firing an inspector general.

But Mr. Obama wasted no time in trampling the new law after he took his presidential oath of office. In June 2009, he fired the IG for AmeriCorps, Gerald Walpin, for refusing to back down from his criticisms of a prominent Obama supporter caught misusing hundreds of thousands of dollars in federal subsidies. Mr. Walpin also spooked the White House because he courageously exposed how AmeriCorps had no legal justification for pouring tens of millions of dollars into the Teaching Fellows Program, one of the agency’s flagships.

At the time, ABC News reported that a “source familiar with the president’s thinking” said that Mr. Obama wanted to replace Mr. Walpin with “someone who could effectively provide the kind of independent oversight that the president values.” The best way to assure “independent oversight” is to remind all inspectors general that they will be axed if they embarrass the White House. A joint House-Senate investigation concluded that firing Mr. Walpin “undermines the Inspectors General Act.”

In the same month Mr. Walpin was fired, the administration unsuccessfully sought to obliterate the independence of the special inspector general for TARP, Neil Barofsky. Some IGs who have not been fired have instead come under withering pressure. Russell George, the IG who exposed the IRS’ targeting of conservative nonprofit groups, has been hammered by Mr. Obama’s congressional allies for almost a year. The special inspector general for Afghanistan reconstruction, John Sopko, has been harshly criticized by bureaucrats and political appointees for his forthright reports on Afghan debacles.

At the Homeland Security Department, the acting IG repeatedly launched pre-emptive strikes against facts that could undermine Mr. Obama’s credibility. Republican Sen. Ron Johnson of Wisconsin declared that a Homeland Security Deparment IG report watered down many of the details on a 2012 alcohol-and-prostitute rampage by Secret Service agents in Colombia “in order to avoid embarrassing the administration in an election year.” Mr. Edwards first delayed and then jiggled the classification status of a report on Transportation Security Administration screw-ups to minimize the number of officials who saw it. A senior aide asserted that Mr. Edwards also ordered changes to a report on whether top immigration officials had lied to Congress about a program designed to identify illegal immigrants arrested by local law enforcement.

For instance, there was no inspector general for the State Department during Hillary Clinton’s entire reign. Instead, the position was filled on an acting basis by a retired Foreign Service officer who was close friends with Undersecretary of State for Management Patrick Kennedy. The lack of a real IG at State might have helped “contain the facts” regarding Benghazi and other scandals. The Obama administration only announced a permanent IG after Republican Sen. Ted Cruz of Texas announced last year that he would block all State Department nominations until the IG slot was filled.

Though Mr. Obama promised that his would be the “most transparent administration in history,” its hostility to independent critics has sent shockwaves through official Washington. The same mindset that throttles IGs has also spurred more criminal prosecutions of whistleblowers than any previous administration. The Obama team also has a dismal record of obeying the Freedom of Information Act, the federal law intended to permit average citizens to learn how the government is violating their rights and liberties. Good luck in getting your personal surveillance records from the National Security Agency.

Perhaps the Obama team believes that revelations of federal failures violates the president’s prerogative to keep Americans in the dark. Or maybe Mr. Obama is only in favor of “good government” in the abstract — as a phrase that helps make people docile to the latest power grabs from Washington. Or perhaps he simply decided that open government was irreconcilable with his 2008 campaign promise “to make public service cool again.”

James Bovard is the author of “Attention Deficit Democracy” (Palgrave, 2006) and “Lost Rights: The Destruction of American Liberty” (St. Martin’s, 1994).

** Thanks to WT’s Greg Groesch for the excellent illustration.