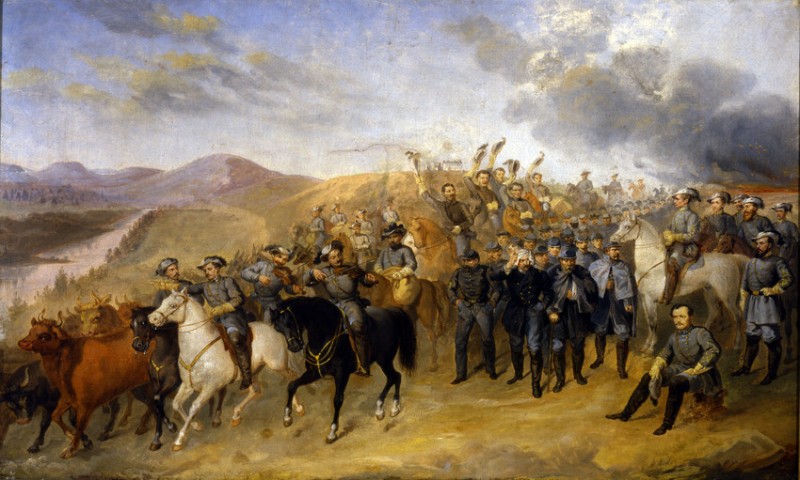 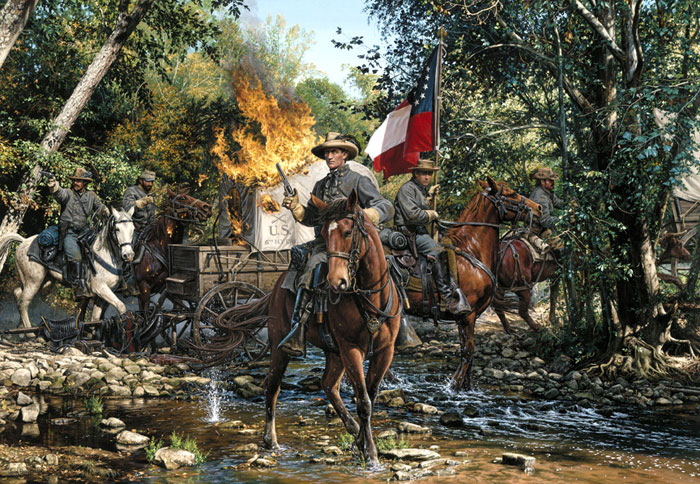 On this day 150 years ago, John S. Mosby’s Rangers attacked a wagon train delivering supplies to Union General Phil Sheridan.  I will write more about Mosby next month pegged to the 150th anniversary of Union General George S. Custer’s hanging of six of Mosby’s men in my hometown, Front Royal Virginia. I will also write more about how General Sheridan ravaged the Shenandoah Valley – since numerous commentators have disputed the facts in my Wall Street Journal piece last month.

Here is how the Philadelphia Inquirer reported Mosby’s August 13, 1864 raid:

About the only aggressive enemy in the Military Division is MOSBY, and the only dangerous place appears to be the rear of our army on its communication with this point . . . . The Valley of the Shenandoah has been almost completely stripped of its wheat crop, and as cattle, sheep and hogs have disappeared long ago, it is now more difficult to advance through it with an army than ever before. As it is impossible to glean any subsistence from the country, the supply question has already become the great vexation.  Our losses by the attack on our wagon train at Berryville were seventy-two wagons, over two hundred mules, and one hundred and fifty prisoners . . . .

Just after dawn on 13 Aug. 1864, Col. John Singleton Mosby and 300 of his 43d Battalion Partisan Rangers attacked the rear section of Maj. Gen. Philip H. Sheridan’s 600-vehicle wagon train . . . . Mosby surprised and routed the Federals as they rested, cooked breakfast, and hitched their horses. Mosby’s men, losing only one killed and one mortally wounded, captured 200 beef cattle, 500-600 horses, 100 wagons, and 200 soldiers. The raid ended by 6:30 a.m.

During the Wagon Train Raid, a detachment from the 144th Ohio took a position behind a stone wall at the Buck Marsh Church . . . . However, they were shattered by a strong Rebel charge . . . .The 144th Ohio’s loss in this disastrous affair was 5 killed, 10 wounded, and 76 captured . . . .

Sheridan’s supplies were profoundly disrupted.  But, in a message a few days later to Gen. U.S. Grant, the supreme Union commander, Sheridan brazenly lied: “Mosby has annoyed me and captured a few wagons.”   Sheridan could have been a great White House Press Secretary.

The top illustration is an 1868 painting representing the raid by French artist Charles Edouard Armand-Dumaresq. The second painting is from John Paul Strain; his excellent artwork is available for purchase here.

The historical marker below is far better written than most such roadside décor. I especially like the last line: “Berryville’s citizens, including many small boys, helped  burn the wagons after liberating their contents.” 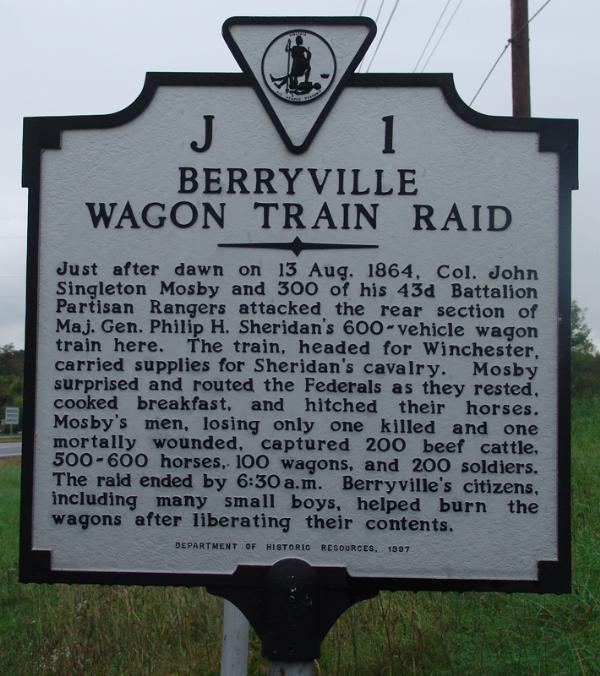