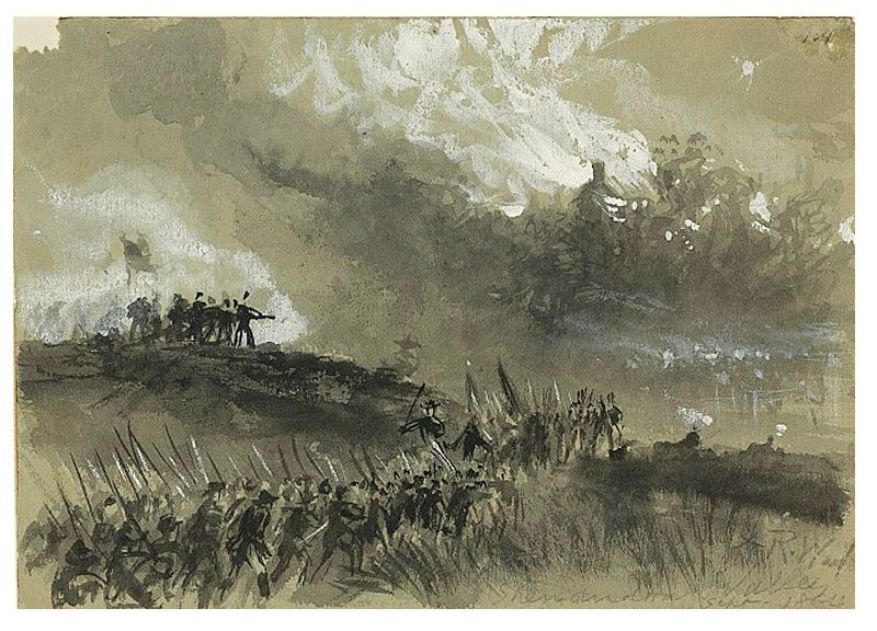 Nathan Millet, the editor of MilitaryHistoryNow.com, today posted my article on Sheridan’s 1864 burning of the Shenandoah Valley.

GEORGE ORWELL WROTE in 1945 that “the nationalist not only does not disapprove of atrocities committed by his own side, but he has a remarkable capacity for not even hearing about them.” The same moral myopia has carried over to most Americans’ understanding of the Civil War. While popular historians have recently canonized the war as a veritable holy crusade to free the slaves, in reality civilians were intentionally targeted and brutalized, particularly in the final year of the conflict.

The most dramatic forgotten atrocity in the Civil War occurred a little more than 150 years ago when Union Gen. Philip Sheridan laid waste to a hundred mile swath of the Shenandoah Valley leaving vast numbers of women and children at risk of starvation. Surprisingly, this scorched earth campaign has been largely forgotten, foreshadowing how subsequent brutal military operations would also vanish into the Memory Hole.

“We burnt some sixty houses and all most of the barns, hay, grain and corn in the shocks for 50 miles [south of] Strasburg… It was a hard-looking sight to see the women and children turned out of doors at this season of the year.”

In August 1864, supreme Union commander Ulysses S. Grant ordered Sheridan to “do all the damage to railroads and crops you can… If the war is to last another year, we want the Shenandoah Valley to remain a barren waste.” Sheridan set to the task with vehemence, declaring that “the people must be left nothing but their eyes to weep with over the war” and promised that, when he was finished, the valley “from Winchester to Staunton will have but little in it for man or beast.”

Because residents of the region lived within the borders of a state that had seceded from the Union, Sheridan acted as if they had automatically forfeited their property, if not their very lives. Yet some Union soldiers were aghast at the marching orders. A Pennsylvania cavalryman lamented at the end of the fiery spree: “We burnt some 60 houses and all most of the barns, hay, grain and corn in the shocks for 50 miles [south of] Strasburg… It was a hard-looking sight to see the women and children turned out of doors at this season of the year.”

An Ohio major wrote in his diary that the burning “does not seem real soldierly work. We ought to enlist a force of scoundrels for such work.”

A newspaper correspondent embedded with Sheridan’s army reported: “Hundreds of nearly starving people are going North. Not half the inhabitants of the valley can subsist on it in its present condition.”

After one of Sheridan’s favourite aides was shot by Confederate soldiers, the general ordered his troops to burn all houses within a five mile radius. After many outlying dwellings had been torched, the small town at the center – Dayton – was spared only after one Federal officer outright disobeyed Sheridan’s order. The homes and barns of Mennonites – a peaceful sect who opposed slavery and secession – were especially hard hit by that crackdown, according to a 1909 history of Mennonites in America.

By the end of Sheridan’s campaign, the former “breadbasket of the Confederacy” could no longer even feed the women and children remaining there. An English traveler in 1865 “found the Valley standing empty as a moor.”

Historian Walter Fleming, in his classic 1919 study, The Sequel to Appomattox (available here), quoted one bedeviled local farmer: “From Harper’s Ferry to New Market, which is about 80 miles, the country was almost a desert. The barns were all burned; chimneys standing without houses, and houses standing without roof, or door, or window.”

John Heatwole, author of The Burning: Sheridan’s Devastation of the Shenandoah Valley (1998), concluded: “The civilian population of the valley was affected to a greater extent than was the populace of any other region during the war, including those in the path of Sherman’s infamous march to the sea in Georgia.” Unfortunately, given the chaos of the era at the end of the Civil War and its immediate aftermath, there are no reliable statistics on the number of women, children, and other civilians who perished thanks to “the burning.”

Some defenders of the Union’s military tactics insist that there was no intent to harshly punish civilians. But, after three years of a bloody stalemate, the Lincoln Administration had adapted a ‘total war’ mindset to scourge the South into submission. As Sheridan was finishing his fiery campaign, Gen. William Tecumseh Sherman wrote to Gen. Grant that “[U]ntil we can repopulate Georgia, it is useless to occupy it, but the utter destruction of it’s roads, houses, and people will cripple their military resources.” Sherman had previously telegrammed Washington that “[T]here is a class of people – men, women, and children, who must be killed or banished before you can hope for peace and order.” President Lincoln congratulated both Sheridan and Sherman for campaigns that sowed devastation far and wide.

The carnage inflicted by Sheridan, Sherman, and other northern commanders made the South’s post-war recovery far slower and multiplied the misery of both white and black survivors. Connecticut College professor Jim Downs’ recent book, Sick From Freedom, exposes how the chaotic situation during and after the war contributed to the deaths of hundreds of thousands of freed slaves.

After the Civil War, politicians and many historians consecrated the conflict and its grisly tactics were consigned to oblivion. The habit of sweeping abusive policies under the rug also permeated post-Civil War policy towards the Indians (Sheridan famously declared “the only good Indian is a dead Indian”) and the suppression of Filipino insurgents after the Spanish-American War. Later historians sometimes ignored U.S. military tactics in World War Two and Vietnam that resulted in heavy civilian casualties.

The failure to recognize how wars routinely spawn pervasive brutality and collateral deaths lowers Americans’ resistance to new conflicts that promise to make the world safe for democracy, or rid the world of evil, or achieve other lofty sounding goals. For instance, the Obama administration sold its bombing of Libya as a self-evident triumph of good over a vile despot; instead, chaos reigns in Tripoli. As the administration ramps up bombing in Syria and Iraq, both its rhetoric and its tactics echo prior U.S. misfires. The proclaimed intentions of U.S. bombing campaigns are far more important than their accuracy.

Since 1864, no prudent American should have expected this nation’s wars to have happy or uplifting endings. Unfortunately, as long as the spotlight is kept off atrocities, most citizens will continue to underestimate the odds that wars will spawn debacles and injustices that return to haunt us.

James Bovard is the author of author of Public Policy Hooligan, Attention Deficit Democracy, The Bush Betrayal, Terrorism and Tyranny, and other books. More info at www.jimbovard.com; on Twitter @jimbovard. This article originally appeared on CounterPunch.com in 2014. It was reprinted with permission of the author.