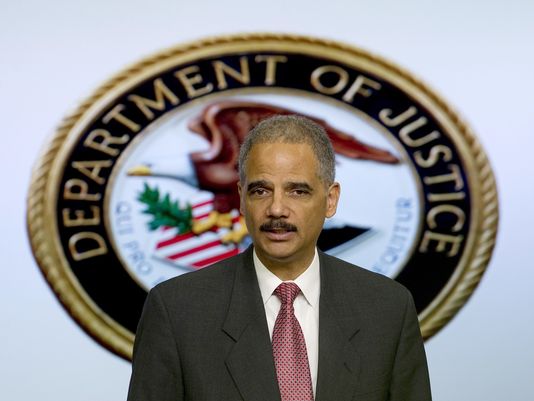 As Holder retires, Obama’s attorney general bulldog should be vilified, not praised

Eric Holder is reaping applause as his six-year reign as Attorney General comes to a close. But Holder’s record is profoundly disappointing to anyone who expected the Obama administration to renounce the abuses of the previous administration. Instead, Holder championed a Nixonian-style legal philosophy that presumed that any action the president orders is legal.

Holder championed President Obama’s power to assassinate people outside the United States — including Americans — based solely on the president’s secret decrees. On March 6, 2012, Holder defended presidentially-ordered killings: “Due process and judicial process are not one and the same, particularly when it comes to national security. The Constitution guarantees due process, it does not guarantee judicial process.” TV comedian Stephen Colbert mocked Holder: “Trial by jury, trial by fire, rock, paper scissors, who cares? Due process just means that there is a process that you do.” For Holder and the Obama administration, reciting certain legal phrases in secret memos was all it took to justify executions.

Though Holder had criticized the Bush administration’s warrantless wiretaps before he took office, he became the key defender of National Security Agency’s email dragnet. Even after Edward Snowden had revealed that the NSA was illegally vacuuming up millions of Americans’ email and other communications, Holder falsely proclaimed in June 2013 that, “The Government cannot target anyone… unless there is an appropriate, and documented, foreign intelligence purpose for the acquisition (such as for the prevention of terrorism, hostile cyber activities, or nuclear proliferation…” But confidential documents revealed that the NSA’s definition of terrorist suspect is so ludicrously broad that it includes “someone searching the web for suspicious stuff.”

Holder has continued the tradition of previous attorney generals of exonerating government officials who commit politically-approved crimes. Though President Obama admitted that U.S. government officials were guilty of torture, the only CIA official that Holder prosecuted was John Kirakou, a courageous whistleblower who publicly admitted that the CIA was waterboarding. Holder is also complicit in the Obama administration’s decision to suppress a massive amount of information about illegal interrogation practices that occurred during the prior administration.

Holder was lavishly praised last month after he announced that the Justice Department will cease sharing loot seized from Americans with state and local police. But in 2009, shortly after he took office, Holder bragged at the Asset Forfeiture National Leadership Conference about his role in championing forfeiture in congressional testimony ten years earlier and proclaimed that “the Asset Forfeiture Program provides vitally important funding for law enforcement.” Holder reversed course last month only after a Washington Post expose proved that his favored program created an incentive for lawmen to wrongfully confiscate property from thousands of innocent Americans. Holder has proposed no compensation to the victims of the seizure frenzy he helped unleash.

Newspapers also heaped accolades on Holder for his declaration last month on Martin Luther King Day about “the troubling reality…that we lack the ability right now to comprehensively track” police shootings across the nation. But there was a law on the books that Congress enacted in 1994 to require the Attorney General to collect and publish annual data on “the use of excessive force by law enforcement officers.” Holder, like prior attorney generals, ignored the mandate. And the Justice Department continues covering up killings by federal agents, including a rash of fatal shootings by Border Patrol agents and the FBI killing of 27-year-old Ibragim Todashev during questioning at his Florida apartment in 2013 regarding the Boston Marathon bombing.

Since Obama was lawfully elected, Holder’s Justice Department has acted as if anything that Obama’s appointees chose to do is automatically legal. Thus, the Equal Employment Opportunity Commission concocted a new rule to punish businesses that refuses to hire ex-convicts. Thus, the Department of Housing and Urban Development devised an arbitrary new standard to punish businesses that fail to give preferential treatment to minorities (a policy that the Supreme Court will likely strike down later this year). Nor has Holder had any complaints about the White House’s frenetic rewriting of the Affordable Care Act to protect Democratic candidates from an anti-ObamaCare backlash.

After Obama himself, Holder bears primary blame for leaving the 2008 campaign promise of “hope and change” in ruins. Almost a century ago, H.L. Mencken quipped that the “ironically so-called” Justice Department was in fact “a fecund source of oppression and corruption…” Unfortunately, Holder did little in office to refute Baltimore’s best-known cynic.