The Intercept has a great story this morning with confidential documents revealing the official TSA warning signs.  My favorite terrorist giveaway is “excessive complaints about  the screening process.”

Ya, that was the first trick my Al Qaeda buddies told me about how to finesse airport security prior to wreaking havoc aboard a flight. 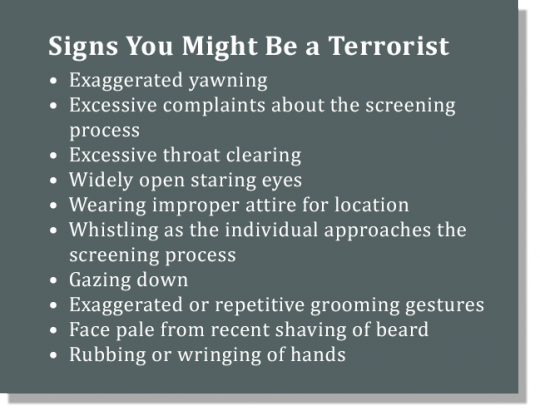 I have whacked TSA’s behavior detection program plenty of times in recent years. Here’s an outtake from a 2013 Washington Times op-ed:

Other TSA programs have also pointlessly harassed or subjugated Americans. Gerardo Hernandez, the TSA agent slain on Friday, was part of the agency’s “behavior-detection” program involving thousands of TSA agents who “chat down” passengers at airports and watch for “micro-expressions” that signal potential trouble. Though Mr. Hernandez may have been a model employee — competent, courteous and fair-minded — that program has failed to detect a single terrorist and has spurred the arrests of thousands of travelers.

More than 30 TSA agents complained in 2012 that the behavior-detection program at Boston’s Logan International Airport had become a “a magnet for racial profiling, targeting not only Middle Easterners, but also blacks, Hispanics and other minorities,” The New York Times reported. The agents relied on “terrorist profiles” such as black guys wearing baseball caps backward or Hispanics traveling to Miami. In Honolulu, some behavior-detection agents were nicknamed “Mexicutioners” for their proclivity for harassing Mexican travelers.

The behavior-detection squad at Newark Liberty International Airport in New Jersey engaged in such blatant stereotyping that it was derided as “Mexican hunters” by other TSA agents. Some behavior-detection officers complained that their supervisors pressured them to fabricate false charges against illegal aliens to justify reporting them to law enforcement. Last June, an inspector general slammed the behavior-detection program as a perennial flop, deriding the TSA for failing to develop “performance measures” or to “accurately assess” its effectiveness.

I have clashed with TSA screeners plenty of times over the years.  I was cross-examined by a TSA “behavior detection” officer last year when returning from New Hampshire:

As I was going through the TSA checkpoint last Sunday at the Manchester, NH airport, I was cross-examined by a TSA Behavior Detection Officer (BDO). The BDO engages in “chat-downs” of travelers to select which passengers are pulled aside for special searches or third-degree interrogation.

This BDO guy was a colicky, low-watt, middle-aged white guy who looked like he signed on with TSA after receiving a pension for spending 30 years writing parking tickets in some one-horse New England town.

He  asked if I was traveling on business or pleasure.

“What were doing in New Hampshire?” he grumbled.

“I was giving a speech on the TSA.”

“It was a great audience. They seemed to really enjoy the speech.”

“Okay” –  and he shrugged and signaled I could move along.

I was waiting for his followup question – and I would have told him folks liked the speech because every person there despised his agency and would like to see him thrown out of his uniform and into the street.

Here’s a vignette of a 2011 encounter at Baltimore-Washington Airport:

I was traveling out to a conference in Las Vegas  when I got accosted at Baltimore Washington International Airport. The culprit had epaulets and more swagger than a second-term Arkansas congressman. All the women who had warned me for years that cigars would be my downfall were finally vindicated.

I was passing through a Transportation Security Administration checkpoint. I was trying my damndest to be a good citizen. I had skipped going to the shooting range that morning so that my hands and shirt would not reek of cordite. I had double-checked to confirm I had not left any ammo clips in my carry-on bag. And I was not even wearing my favorite “Government Sux!” t-shirt. And I even took off my boots and send them down through the carry-on scanner.

I slipped through the magnetometer with nary a beep. But this tall prematurely balding TSA agent with bulging eyes stepped towards me, pointed, and bellowed: “WHAT’S THAT IN YOUR POCKET?!!?”

I glanced down at my shirt pocket. “It’s a cigar.”

He glared like he’d caught me smuggling a pipe bomb in my underwear.

“Let me see!!!” he barked as everyone with a 75-foot radius turned to look.

I handed it to him and explained: “It’s a brand called ‘Factory Throwouts.’ First time I tried ‘em – 20 bucks for 20 cigars, and free shipping. I like cheap cigars, but they’re too cheap even for me.”

He snorted and thrust it back at me. Perhaps he was suspicious because the cigar didn’t have a band wrapper. If it had been a Macanudo, he might have changed his attitude.

“WHAT ELSE YOU GOT IN THAT POCKET!?!”

I retrieved it and showed it to him. He glanced at it the way an illiterate person looks at a map you hand him when you’re lost and seeking directions in some woebegone backwoods crossroads.

He eventually snorted that I could pass, but probably only because he couldn’t figure out whether my Cheshire Cat grin was moronic or seditious. After I passed, I turned and watched this guy for a few minutes. He was acting like a prison guard browbeating a bunch of convicts lined up to take a shower.