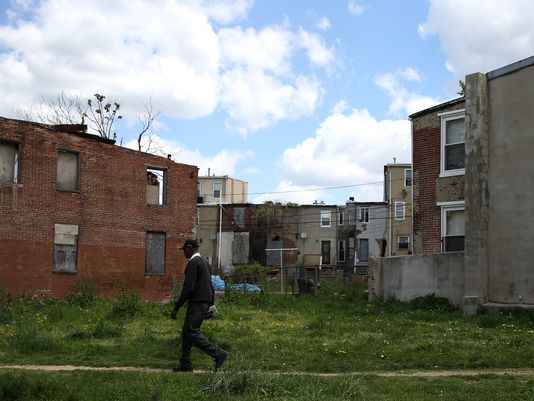 Trusting federal housing subsidies to help save the city is the ultimate triumph of hope over experience.

Baltimore’s recent riots are not surprising in a city that has long been plagued by both police brutality and one of the nation’s highest murder rates . Though numerous government policies and the rampaging looters deserve blame for the carnage, federal housing subsidies have long destabilized Baltimore neighborhoods and helped create a culture of violence with impunity.

Yet just last week, Baltimore officials were in Washington asking for more. Given the history, it defies understanding.

The U.S. Department of Housing and Urban Development was created in 1965, and Baltimore received massive subsidies to build housing projects in the following years. Baltimore’s projects, like those in many other cities, became cornucopias of crime. One 202-unit sprawling Baltimore subsidized housing project (recently slated for razing) is known as “Murder Mall.” A 1979 HUD report noted that the robbery rate in one Baltimore public housing project was almost 20 times higher than the national average. The area in and around public housing often becomes “the territory of those who do not have to be afraid — the criminals,” the report said. Baltimore Mayor Kurt Schmoke in 1993 blamed maintenance problems at one public housing projects on drug dealers who refused to let city workers enter the buildings.

In the 1990s, the Baltimore Housing Authority began collecting lavish HUD subsidies to demolish publish housing projects. But critics complained that HUD was merely replacing “vertical ghettos with horizontal ones.” Baltimore was among the first cities targeted for using Section 8 vouchers to disperse public housing residents.

HUD and the city housing agency presumed that simply moving people out of the projects was all that was necessary to end the criminal behavior of the residents. Baltimore was one of five cities chosen for a HUD demonstration project — Moving to Opportunity (MTO) — to show how Section 8 could solve the problems of the underclass. But the relocations had “tripled the rate of arrests for property crimes” among boys who moved to new locales via Section 8. A study published last year in the Journal of the American Medical Association reported that boys in Section 8 households who moved to new neighborhoods were three times more likely to suffer post-traumatic stress disorder and behavioral problems than boys in the control group. A 2009 research project on Section 8 published in Homicide Studies noted that in the one city studied, “Crime, specifically homicide, became displaced to where the low-income residents were relocated. Homicide was simply moved to a new location, not eliminated.”

Ed Rutkowski, head of a community development corporation in one marginal Baltimore neighborhood, labeled Section 8 “a catalyst in neighborhood deterioration and ghetto expansion” in 2003.

Regardless of its collateral damage, Section 8 defines Valhalla for many Baltimoreans. Receiving a Section 8 voucher can enable some recipients to live rent-free in perpetuity. Because recipients must pay up to a third of their income for rent under the program, collecting Section 8 sharply decreases work effort, according to numerous economic studies. Last October, when the local housing agency briefly allowed people to register for the program, it was deluged with 73,509 applications. Most of the applications were from families — which means that a third of Baltimore’s 241,455 households sought housing welfare. (Almost 10% of Baltimoreans are already on the housing dole.) Section 8 is not an entitlement, so the city will select fewer than 10,000 “winners” from the list.

HUD’s Federal Housing Administration also has a long history of destabilizing neighborhoods in Baltimore and other big cities. A HUD subsidized mortgage program for low-income borrowers launched in 1968 spurred so many defaults and devastation that Carl Levin, then Detroit City Council president and later a long-term U.S. senator, derided the program in 1976 as “Hurricane HUD.” In the late 1990s, more than 20% of FHA mortgages in some Baltimore neighborhoods were in default — leading one activist to label Baltimore “the foreclosure capital of the world.” HUD Inspector General Susan Gaffney warned in 2000: “Vacant, boarded-up HUD-owned homes have a negative effect on neighborhoods, and the negative effect magnifies the longer the properties remain in HUD’s inventory.”

The feds continued massive negligent mortgage lending in Baltimore after that crisis, creating fresh havoc in recent years. In late 2013, more than 40% of homes in the low-income Carrollton Ridge neighborhood were underwater. Reckless subsidized lending in Baltimore and other low-income areas helped saddle Maryland with the highest foreclosure rate in the nation by the end of last year. One in every 435 housing units in Baltimore was in foreclosure last October, according to RealtyTrac.

President Obama has said that the Baltimore riots showed the need for new “massive investments in urban communities.” But HUD’s record proves that the best-intentioned federal intervention is far more likely to sow chaos than to spur the stable neighborhoods that are perhaps the best insurance policy against violence. Trusting federal housing subsidies to create domestic tranquility is the ultimate triumph of hope over experience.

One Response to USA TODAY: “Hurricane HUD” & the Baltimore Riots