Marty Nemko had me on his NPR-San Francisco KALW program today to debate federal job training reform with Stephen Baiter, the executive directory of the Workforce Development Board of Contra Costa County, California.  Marty wanted a civil debate, so we didn’t bust any chairs over each other’s heads.

I have been writing about federal job programs sporadically since the early 1980s.  Marty mentioned this Wall Street Journal piece I did in 2011.  Here’s a page with links to my 1980s/early 1990s job training critiques.

Stephen and Marty both urged me to come up with constructive suggestions. But I’ve seen the feds try practically every reform in the book – and still shaft would-be trainees.  Doing harm is worse than doing nothing. For generations, politicians have won applause by promising to give young people valuable skills and betrayed them year after year.  Federal job training is a prime example of the incorrigibility of a government intervention.

I cited several evaluations of federal programs which showed that “training” actually reduced participants’ subsequent earnings. Marty suggested that rather than relying on past evaluations, we should use logic to come up with a better program. I laughed and said it was a peculiar type of logic that begins by disposing of the evidence.

UPDATE: Stephen Baiter, the government job trainer, sent me a series of angry Twitter messages after the show.  His comments during the debate often seemed to be an endless series of prefabricated phrases, presumably pre-approved by the U.S. Department of Labor.  In his Twitter profile, he describes himself as a “Strategic Thinker.”  You be the judge.  Apparently government job trainers believe that there is a statute of limitation by which they have no obligation to learn from the mistakes of earlier decades and prior programs.

@JimBovard – as said this morning, "train & pray" applies to past efforts for #job #training – but your #boomer view limits #perspective

@JimBovard your stuff is so #pathetic that I feel like I should feel sorry for you. – sorry pathetic

@baiter Label critics "pathetic" in lieu of learning the lessons of past federal training failures? Your $$$ comes in – No sweat? 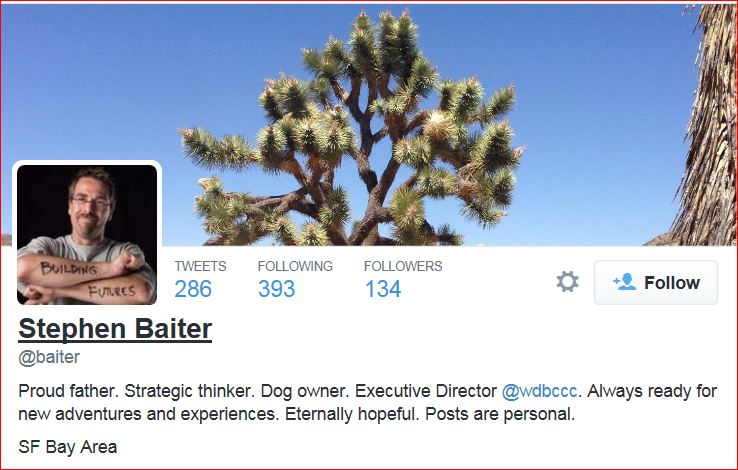 @JimBovard @baiter The learning has occurred. The system has moved forward. Learn about the progress or remain irrelevant #boomermentality

Have you ever noticed how bureaucrats live in the past tense? “Learning has occurred… has moved forward.” Obama was using present tense last year to deride federal programs as “train and pray” shoot-in-the-dark operations that have little idea whether trainees actually benefit. But apparently all of that is ancient history and we are supposed to blindly trust that bureaucrats have quietly fixed all the problems that they perennially denied existed.

@NicknSacramento @baiter So Obama was lying last year when he characterized govt programs as "train & pray" with little idea who benefits?

This #boomer hashtag is apparently considered a deft refutation by these California officials. I have never understood bureaucratic logic.