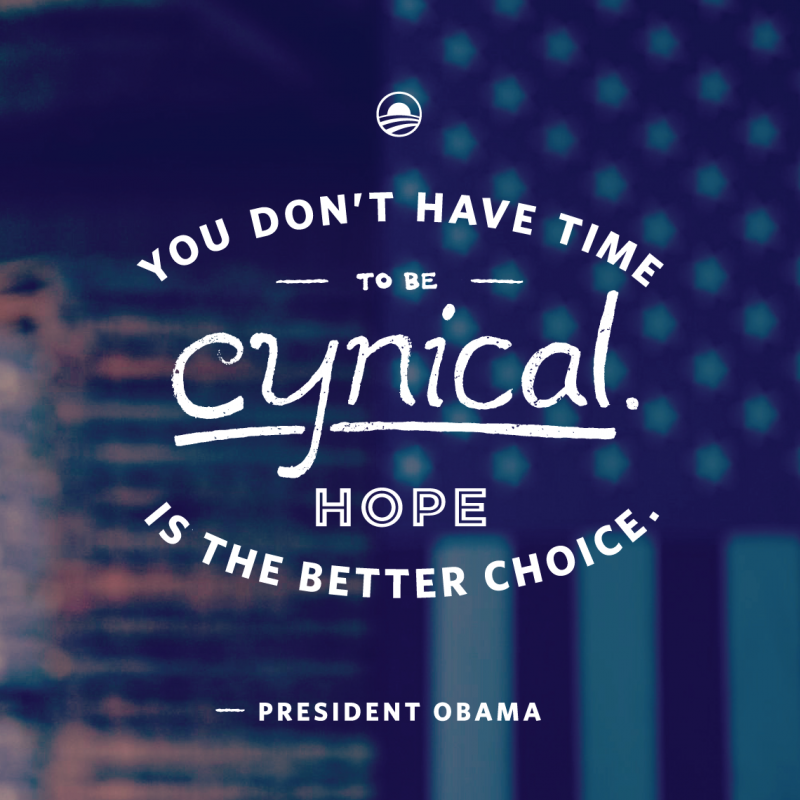 Barack Obama captured the presidency in part because of his appeals to “hope and change.” But after more than six years in power, he is now spending far more time denouncing cynicism. As usual, the worst example of cynicism is citizens who fail to trust the government and the Supreme Leader. A presidency built on restoring faith in the political system is instead disillusioning a new generation toward Washington.

Obama has always milked cynicism like a prize Holstein cow. In 2004, he declared that he was running for the Senate because “we’ve got too much cynicism in this country, and we’re all in this together, and government expresses that.” In 2007, he announced that “my rival in this [presidential] race is not other candidates. It’s cynicism.” At that point, few people recalled that presidential candidate George W. Bush in 1999 had promised Americans “a fresh start after a season of cynicism.”

At a 2008 campaign rally, Michelle Obama told students that “Barack Obama … is going to demand that you shed your cynicism.” Shortly after Obama was first elected, he declared, “Where we are met with cynicism and doubts and those who tell us that we can’t, we will respond with that timeless creed that sums up the spirit of a people: Yes, we can.” Shortly before Obama’s first inauguration, Washington Post columnist Kathleen Parker wrote, “Cynicism isn’t just unfashionable; it’s downright unpatriotic. Heretical.”

At a California fundraiser last year, the president complained that “the fact that since 2007, [Republican senators] have filibustered about 500 pieces of legislation that would help the middle class just gives you a sense of how opposed they are to any progress — has actually led to an increase in cynicism.” That was Obama at his best — brazenly lying while complaining of distrust in politicians. The Washington Post awarded Obama “four Pinnochios” because there have been fewer than 140 filibusters since 2007 for any legislation. The National Journal labeled such assertions as the “stray voltage” tactic, when Obama intentionally misleads listeners in order to embed ideas that advance his agenda. 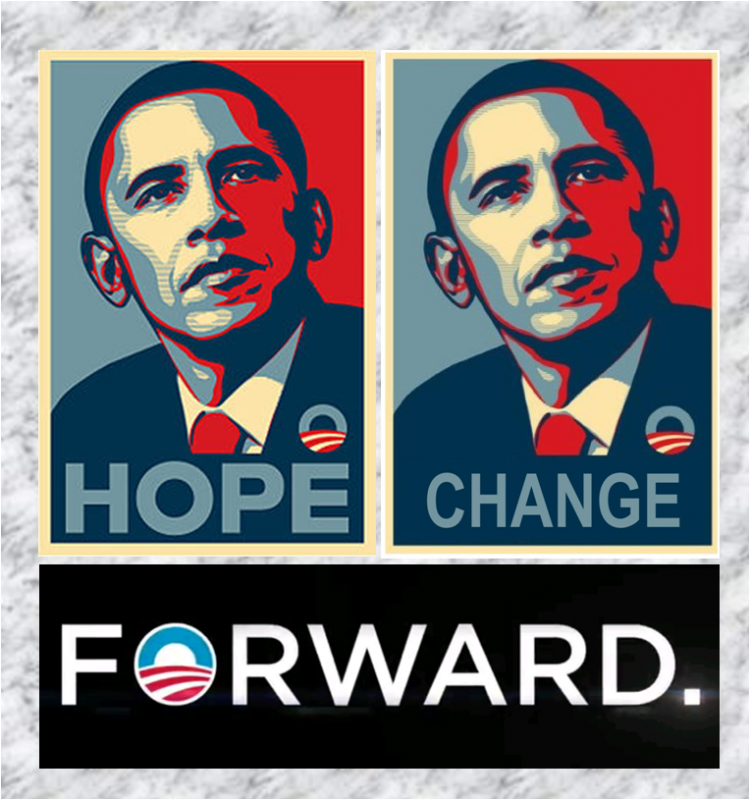 Nowadays, Obama increasingly portrays himself as a victim of cynicism. At the Gridiron Club dinner for Washington poohbahs in 2013, the president bewailed that “maintaining credibility in this cynical atmosphere is harder than ever, incredibly challenging.” The existence of cynicism somehow absolves the president of all the factual inaccuracies in his declarations in the prior year. Later in 2013, he told attendees at an Organizing for Action dinner that the “filter through which people see and receive information about government … is tilted toward cynicism.” Last October, while campaigning to help Democrats in the midterm elections, he lamented, “We’ve got to feel a sense of urgency about this at a time when, frankly, the press and Washington, all it does is feed cynicism.”

Last March, when he was dedicating the Edward Kennedy Institute in Boston, Obama declared, “We live in a time of such great cynicism about all our institutions, and we are cynical about government and about Washington most of all.” The new institute contains a life-size replica of the Senate chamber to awe young people. Obama gushed,

Imagine [children’s] moral universe expanding as they hear about the momentous battles waged in that chamber and how they echo throughout today’s society…. Imagine what a child feels the first time she steps onto that floor, before she’s old enough to be cynical; before she’s told what she can’t do; before she’s told who she can’t talk to or work with; what she feels when she sits at one of those desks; what happens when it comes her turn to stand and speak on behalf of something she cares about; and cast a vote, and have a sense of purpose.

This past May, in a speech at Georgetown University, Obama declared, “I think it’s important when it comes to dealing with issues of poverty for us to guard against cynicism and not buy the idea that the poor will always be with us, and there’s nothing we can do. Because there’s a lot we can do.” Obama sounded as if the government had not yet commenced the trillion+ dollar Great Society programs. Nor did he mention that food-stamp enrollment has skyrocketed under his watch, in part owing to federally funded recruiting drives to sway able-bodied persons to rely on Uncle Sam for their next meal. Politicians can reap applause for urging new steps against poverty regardless of how much harm was inflicted by their previous interventions.

Obama is especially mortified that millennials have lost faith in him. In a 2012 college commencement speech themed to his reelection campaign, he told Barnard College graduates that “whenever you feel that creeping cynicism … the trajectory of this country should give you hope.” The following year, he exhorted Ohio State University graduates to beware of the “creeping cynicism” and people who “warn that tyranny is always lurking just around the corner.” He did not seize that opportunity to explain why being president entitled him to authorize the killing of American citizens solely on the basis of his own decree. Nor did he issue an addendum to the Ohio State speech when, shortly thereafter, Edward Snowden’s leaks proved that the National Security Agency had illegally destroyed tens of millions of Americans’ privacy.

The Obama administration blames everybody except itself for the plummet in trust in government since 2009. White House deputy press secretary Josh Earnest told a press gaggle in May 2014, “I think the thing that breeds a lot of cynicism about the political process are those outside groups that don’t disclose their donors.” (Earnest earns his pay by emitting with a straight face howlers like that.) 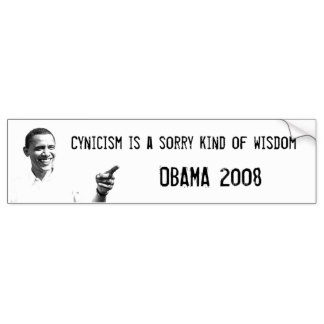 While the president still retains some of the “idealist sainthood” the media bestowed in 2008, his rhetoric is indistinguishable from preceding grafters. “I reject the cynical view that politics is inevitably, or even usually, a dirty business,” declared Richard Nixon on April 30, 1973, the day his top White House aides resigned over their role in the Watergate scandal. Bill Clinton announced in January 1997 that people can “make [America] better if we will suspend our cynicism” about government and politicians. This is the Peter Pan theory of good government: Government would be wonderful if only people believed that it has magical powers.

Politicians hate cynicism the same way that burglars hate Brinks alarm systems. Cynicism about politicians, though, is akin to financial markets for government debts, which routinely mark down bonds to junk status because traders doubt that rulers will pay up. It is unfortunate that there is no way to similarly precisely gauge politicians’ credibility and to mark them down to junk after they reneged once too often.

Until we reach the golden age of honest rulers, moderate cynicism can provide a brake on political power grabs. In the meantime, the best hope for the survival of freedom is that Obama will receive exactly the amount of trust and deference that he deserves.

From the September 2015 issue of The Future of Freedom 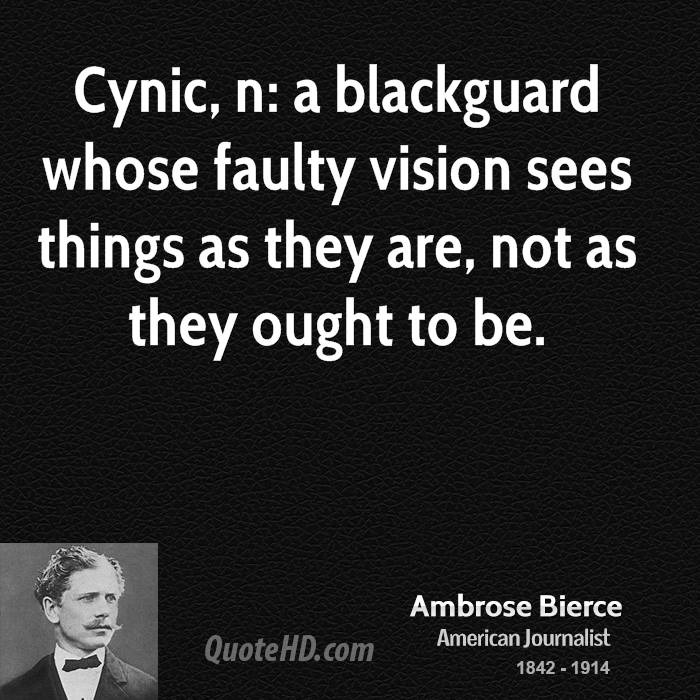