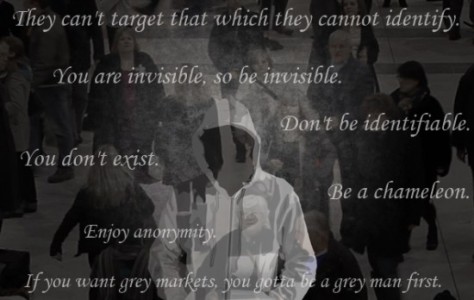 Grey Man jpeg from the Liberty Under Attack blog

The Liberty Under Attack blog last week had an essay on “Blending In: The Art of the Grey Man” –

“Given the fact that American dissidents are unjustly profiled by the government, it stands to reason that direct action must be taken to stymie the creation of political prisoners. Whether these injustices are due to malice or stupidity, the fact of the matter is that the answer to security theater is security culture, and the foundational basis for security culture is the practice of being a grey man. A “grey man” is defined as: ‘A man who can blend in to any scene or situation without standing out, hiding his skills and qualities.’”

The blog article cited my experience as an example of what not to do:

Distinguishing the line between appearance and behavior is not as sharp and defined as you would initially assume. Back in 1995, James Bovard was evicted from the press section of the United States Supreme Court’s courtroom during oral arguments for the Bennis v. Michigan [516 U.S. 442] civil asset forfeiture case, simply because he laughed too loudly, although the “official” reason was that he was inadvertently violating the dress code. Whether it be due to appearance or behavior (or both), Bovard’s experience is invaluable for demonstrating that when you go visit the government, discretion really is the better part of valor.

I wish I got a funny writeup in the Washington Post every time my subversive tendencies were exposed (as happened with that case in 1995). At least Liberty Under Attack didn’t suggest that I shave.  The only way that my laugh could fly under the radar is if I stop drinking beer. And if I have to start exercising discretion when I visit federal agencies,  my job satisfaction could take a helluva hit.

10 Responses to My Supreme Covert Failure