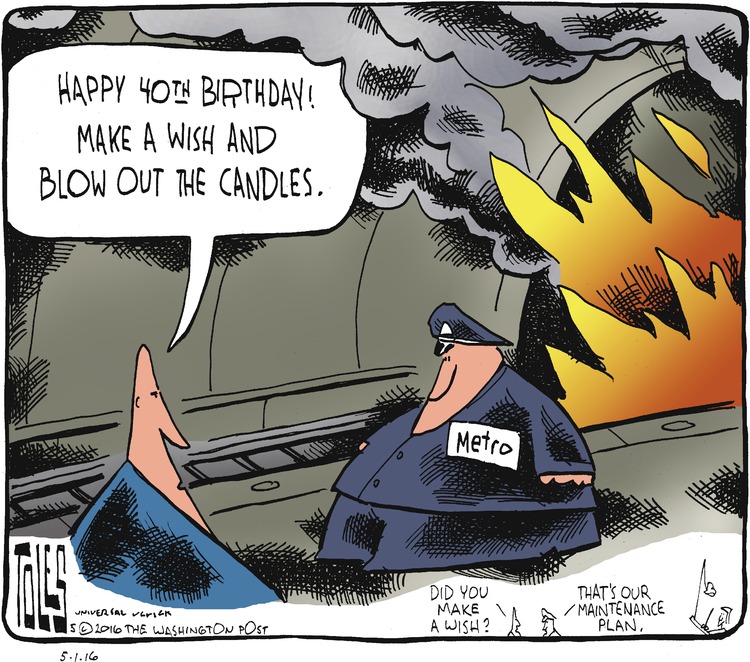 One benefit of the recent subway shutdown in Washington is that the system did not kill anybody that day.  The New York Times recently noted how Metro’s construction 40 years ago was part of a “grand vision of American liberalism.”  But the system only cares about paying its own employees and bureaucrats – to hell with the customers. The National Transportation Safety Board issued a damning report today  – the chairman of that board condemned Metro for having a “severe learning disability” regarding safety.   Metro’s new general manager actually proposed shutting down some of the subway’s lines for six months in order to allow repairs — at the same time he rattled his tin cup for more government handouts.   Metro’s heavy reliance on subsidies is the key to its contempt for customers.  But drawing that simply conclusion is still too great a leap for many Washingtonians.  I was riding the subway a couple Sundays ago and overheard a liberal couple from Virginia explaining to a DC native that the real problem was “the lack of a dedicated funding source” for Metro.  No matter how many handouts the system receives or how incompetently it behaves, more federal funding  is still touted as a panacea.

The system has strong unions and bad management  – a combination which assures that work simply doesn’t get done.  The Washington Times had an excellent series debunking the system a few years ago.

It is morbidly amusing to see federal employees bearing some of the cost of the boundless incompetence of this government subway system.  Unfortunately, Metro’s screw-ups are dragging down the entire D.C. area.

Another hat tip to Tom Toles for his great cartoons…