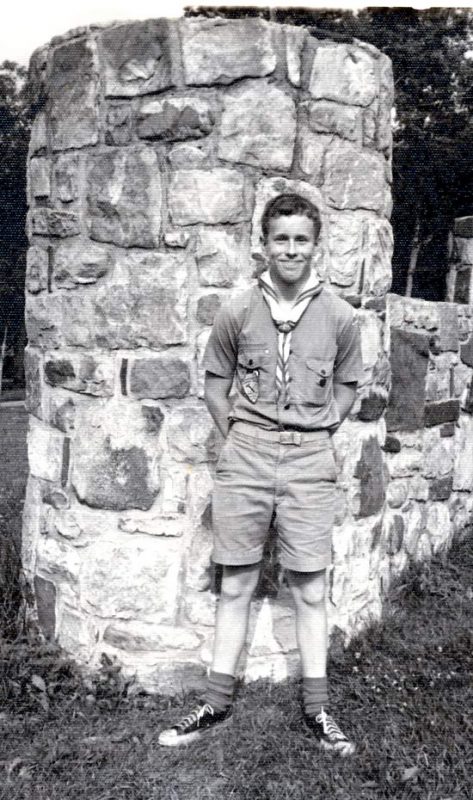 Boy Scouts and the Love of Freedom

Some of my anarcho-libertarian tendencies arose thanks to the years I spent as a Boy Scout. Joining the Scouts was an easy decision, since my father was a Scoutmaster. Even without the family obligation, I might have signed up because Troop 52, based in Front Royal, Virginia, took many exhilarating excursions. My father had a knack for convincing boys that they were having fun even in the bitter cold or driving rain.

Troop 52 often hiked along the nearby Appalachian Trail. On one jaunt, we camped overnight on a mountain ridge about 20 miles south of Front Royal. Along with two other boys, I was roaming after dinner when we spotted a big black bear foraging the outskirts of the campground. I have forgotten who threw the first rock at the bear, but strong circumstantial evidence suggests it was I. The one certainty was that, once that bear charged at us, I was the fastest runner. Back then, it was rare for Virginia black bears to maul people. In this case, the bear reacted like a horse swishing its tail to brush away flies. After putting us to flight, it resumed scavenging.

Along with other Scouts, I sometimes hiked five miles cross-country from the first crest in the Shenandoah National Park to the Beef Cattle Research Station, where I lived. We did not realize that the ruins of old cabins we encountered were vestiges of a brutal public-works project that entailed the forcible eviction of people from their homes. In the 1930s, politicians confiscated 176,000 acres of private land to create a huge park intended to serve as a playground for presidents. Mountaineer families were paid as little as one-tenth the value of their land and falsely vilified as lazy, good-for-nothing parasites. When some owners refused to budge, they were forcibly dragged from their cabins and their homes were burnt down to ensure they never returned. The sordid details of the park’s creation vanished from local memories, and I did not learn of the plundering until long after I left my hometown.

Jamboree
My most formative Scouting experience involved a trek to the Northwest for the 1969 National Jamboree. Each of the nation’s 300 Boy Scout Councils sent one troop selected from members of all the troops in that council. I applied to join the troop from the Shenandoah Area Council, which comprised the northern Shenandoah Valley and a chunk of West Virginia. When I was interviewed in December 1968 at Council headquarters in Winchester, Virginia, the most memorable question was, “What do you think of the Vietnam situation?” Even 12-year-olds had to be screened for dissident tendencies.The 45 members of the Shenandoah Area Council Jamboree troop met at Camp Rock Enon, on the Virginia–West Virginia border, for two weekend training sessions before heading west. I was dumbfounded when we spent three hours marching back and forth on a drill field. That time could have been far better spent climbing trees or setting brush fires. There was far more regimentation in this select group than I had experienced in my hometown troop.Some of the kids in the Shenandoah Area Council Jamboree troop were natural-born bootlickers who probably went on to become personal-injury lawyers, zoning commissioners, or maybe USDA meat inspectors. On the trip to and from Idaho, we often stayed at military bases. I was thrilled at 17-cent breakfasts with unlimited servings. I did not realize that the vittles were so cheap in part because the guys serving us were conscripts whose labor cost the government almost nothing.In South Dakota, I was far more impressed by the Badlands than by Mount Rushmore. Like most Scouts, I subscribed to the Patriotic Version of American History. After visiting the Little Big Horn Battlefield National Monument, I jotted that the Seventh Cavalry’s “heroic defense made the nation yearn for details that no white man lived to tell.” Many years later, I learned that Custer’s men were wiped out in part because the Army quartermaster refused to permit them to carry repeating rifles — which supposedly wasted ammunition. The Indians didn’t have a quartermaster, so they had repeating rifles, and the rest is history.

The Jamboree was held at a state park near Coeur d’Alene in the rugged mountains of northern Idaho. Even in mid July, the ground seemed frozen when I hammered in tent pegs. The biggest surprise was that the water for showers was piped in directly from the Arctic Ocean — or so it felt. But those were minor aggravations quickly forgotten in the thrill of swapping stories and patches with guys from around the nation.

On the Jamboree’s first evening, all the attendees marched into a massive arena for opening ceremonies. I found myself immersed in the biggest herd I ever encountered — 35,000 people, all dutifully striding in the same direction. Being pulled into that vortex literally made me gasp for breath.

Each troop at the Jamboree presented historical or cultural skits from their area. My troop relied on hillbilly humor and ballads — offerings which left me cold. The troop’s musical presentation had nothing of the robust bluegrass spirit of Bill Monroe or Flatt and Scruggs.

The Idaho Jamboree occurred one month before the Woodstock music festival. Instead of tens of thousands of people chanting antiwar slogans, the Scouts roared when they heard Richard Nixon’s message hailing their idealism. Instead of acres of half-naked hippies, the Scouts were protected by “uniform police” who ensured that every boy wore a proper neckerchief at all times. Instead of Joan Baez belting out “We Shall Overcome,” the Scouts listened to Up with People, a 125-member singing group created as an antidote to “student unrest and complaining about America.”

When the time for the final night’s grandiose assembly arrived, I could not tolerate another mass march. I forged a press pass and entered the amphitheater early to get near the main stage to take pictures. The photos came out lame but it was small price to avoid re-immolation in a multitude.

That final ceremony included a presentation by the camp chief on the seven-point statement of commitment to help attendees carry the lessons learned into their lives after they returned home. One of the points warned against the “weakening of youth’s self-respect by the increasing use of drugs, tobacco, and alcohol.” Perhaps inspired by that admonition, I did not start smoking cigars until I turned 15.

The Shenandoah Area Council troop remained at the site one day after the Jamboree formally ended. On my final evening in Idaho, I took off alone rambling over the vast, nearly-empty tract — cherishing the lush mountains, the sky-high pine trees, and a few precious uncrowded hours. That trip definitely taught me to better appreciate solitude.

While the Jamboree celebrated authority and obedience, a different theme emerged some miles to the north 23 years later. “Ruby Ridge” became notorious after U.S. marshals killed 14-year-old Sammy Weaver and an FBI sniper slew Vicki Weaver as she stood in her cabin door holding her baby. Federal prosecutors insisted that Randy Weaver’s family’s move from Iowa to Ruby Ridge proved they were conspiring to have an armed confrontation with the government. Actually, moving to northern Idaho was more akin to relocating to Mars. The wrongful killings and lies that permeated that case convinced millions of Americans that Washington was profoundly untrustworthy. My writings on the case were denounced by FBI Director Louis Freeh: “Mr. Bovard insults the courageous men and women agents of the FBI when he suggests that they would ‘wantonly shoot private citizens based on mere suspicion.’”

After the Idaho trip, I lingered in the Scouts long enough to finish the requirements for Eagle rank. The official Eagle Scout pocket card included Nixon’s signature as “honorary president” of the Boy Scouts of America. I should have kept that card with me to display during frequent encounters with the police in the following years. The Scouts presented Nixon with their highest civilian award — the Silver Buffalo — at the same time his aides commenced clandestine operations that would soon make “Watergate” a household word.

The Scouts were in favor of freedom as a traditional American value — just as long as no one stirred up any trouble. Every Boy Scout meeting opened with a pledge to “do my duty to God and country.” But the more obedience I vowed, the more dubious I became.

The motto for the 1969 Jamboree, for instance, was “Building to Serve.” But I later wondered: Building to Serve whom? The Jamboree put one government official after another on a pedestal, starting with Secretary of Health, Education, and Welfare Peter Finch and extending to anyone with a 3+ word title. Letting politicians define the goals and terms converted service into a recipe for servitude.

I became leery of the Scouts’ endless paeans to leadership. Supposedly, if we all rallied around the leader, everything would always work out fine. “Leadership” often meant simply a knack for herding other people in the direction authorities approved. The prouder of being leaders Scouts were, the more willingly they sacrificed themselves for their superiors. How many boys who attended the Jamboree later pointlessly died in Vietnam? They perished as martyrs to political frauds — in part because of the Scout doctrines they imbibed.

Scouting also made me wary of tub-thumping benevolence. The more good deeds people supposedly performed, the more deluded they sometimes become. And the resulting “moral body count” often was as dubious as the government-program success statistics that I began debunking as a journalist a dozen years later.

On the cheerier side, Scouting made me more of an outdoorsman and accustomed me to ignoring paltry pains — i.e., aches that were not completely debilitating. When I spent a summer hitchhiking around Europe in 1977, I used the same plastic tarp and sleeping bag that served me well with the Scouts on the Appalachian Trail. The European jaunt required constant juggling and jerry-rigging, from sleeping by the side of the road and waking up raring to go, to limping away from an 18-wheel truck crash that obliterated the mini-car I was riding in. Thanks to Scouting, I learned to see minor hardships simply as transaction costs for great adventures. And that Idaho trip vivified that the playing field of life was far bigger than Front Royal — or even Virginia.

This article was originally published in the July 2016 edition of Future of Freedom.

This piece is adapted from Public Policy Hooligan. If you enjoyed the article, you might get a hoot out of the book.

4 Responses to FFF: Boy Scouts and the Love of Freedom