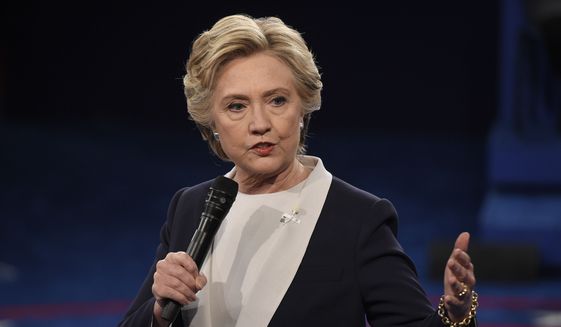 Hillary Clinton is the most qualified presidential candidate in history, according to President Obama. Much of her managerial experience stems from her four years as secretary of State. The biggest program she oversaw there was foreign aid, which spent roughly $50 billion a year between 2009 and 2012. Mrs. Clinton stated in 2009 that “a lot of these aid programs don’t work,” lamented their “heartbreaking” failures, and promised fundamental reform at the Agency for International Development (AID).

But “see no evil” was often the Clinton State Department motto regarding U.S. aid. The Ethiopian government received more than $3 billion in U.S. aid while Mrs. Clinton was secretary. That regime has a simple recipe for democracy: Those who vote wrong do not eat. A 2011 BBC investigation “found villages where whole communities are starving, having allegedly been denied basic food, seed and fertilizer for failing to support Prime Minister Meles Zenawi.” The U.S. government knew of the abuses but muzzled itself to avoid offending the Ethiopian regime. A confidential Nov. 25, 2009 email from the U.S. Embassy in Addis Ababa to Washington noted, “Efforts to monitor food distribution are aimed at making sure vulnerable people are fed and cannot be expanded to include investigation of political pressures applied to those people without jeopardizing that primary mission.”

Corruption has long plagued foreign aid and Mrs. Clinton claimed to be spearheading a global crusade against graft. But when push came to shove, she went to the barricades for the kleptocracies’ right to collect U.S. tax dollars. When Republicans crafted legislation in 2011 to prohibit aid from going to graft-ridden governments, Mrs. Clinton warned that restricting handouts to nations that fail anti-corruption tests “has the potential to affect a staggering number of needy aid recipients.”

Despite Mrs. Clinton’s reform pledge, AID continued burying boondoggles with bureaucratic bluster. At a 2011 congressional hearing, Rep. Jason Chaffetz, Utah Republican and chairman of the House Subcommittee on National Security, scoffed at AID’s boasts on its Iraqi projects: “262,482 individuals reportedly benefited from medical supplies that were purchased to treat only 100 victims of a specific attack; 22 individuals attended a five-day mental health course, yet 1.5 million were reported as beneficiaries … and 280,000 were reported as benefiting from $14,246 spent to rehabilitate a morgue.”

During Mrs. Clinton’s tenure, the State Department and AID gave grants to promote investigative journalism in numerous developing nations as part of its “good governance” programs. But exposing abuses was only a virtue outside U.S. territorial limits. From 2011 onward, AID’s acting inspector general massively deleted information on foreign aid debacles in audit reports, as The Washington Post reported in 2014. Mrs. Clinton also ran the most secretive State Department in modern American history.

Afghanistan was Mrs. Clinton’s biggest foreign aid failure. In November 2009, she declared that the Afghan government must take action to “demonstrate there’s no impunity for those who are corrupt.” She promised the United States would not pour money directly into Afghan government agencies “unless we have a certification that … we are going to have ministries that we can hold accountable.”

But the following year, Mrs. Clinton made a “strategic foreign assistance decision” (according to a 2012 AID memo first reported by The Washington Times) to provide “at least 50 percent of U.S. Government assistance directly” to the Afghan government. AID “more than tripled its awards of direct assistance” to the Afghan government, rising from $470 million in 2009 to $1.4 billion in 2010, according to the Government Accountability Office. AID hired KPMG and Ernst & Young to analyze the program; when they both warned in 2011 that Afghan agencies were utterly untrustworthy, AID suppressed their reports.

In lieu of fighting Afghan corruption, AID ignited pyres of U.S. tax dollars. As the Christian Science Monitor noted in mid-2010, AID “created an atmosphere of frantic urgency about the ‘burn rate’ — a measure of how quickly money is spent. Emphasis gets put on spending fast to make room for the next batch from Congress.” The “burn rate” fixation produced endless absurdities, including collapsing schools, impassable roads, failed electrification projects, and phantom health clinics.

Foreign aid has long been known as “walking around money for the secretary of State,” and Mrs. Clinton enjoyed the gratitude she received for the $200 billion the United States distributed during her tenure. But Mrs. Clinton’s foreign aid record shows there is no reason to expect her to bring competence or candor to the White House.

To complement NYT piece on who Trump kissed, here's an oped on foreign nations that @HillaryClinton screwed https://t.co/8r0wOGy1zG

Carping on Trump-Clinton Second Debate
FFF: Boy Scouts and the Love of Freedom