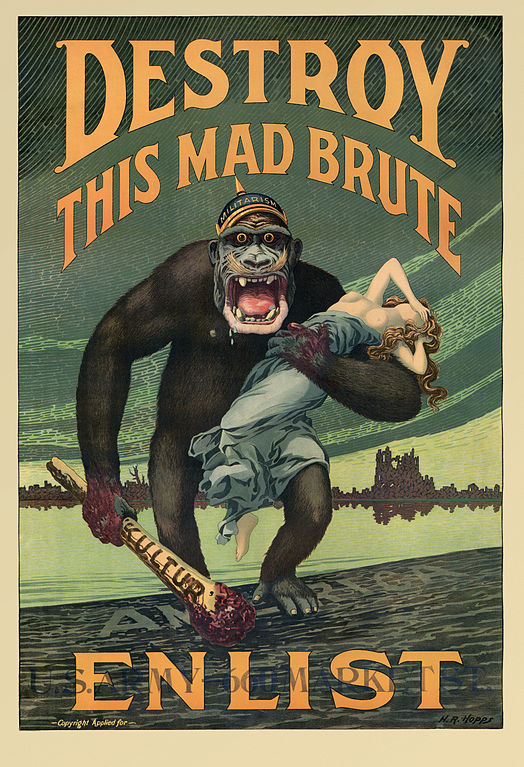 Woodrow Wilson made democracy unsafe for the world: James Bovard

Let’s stop kidding ourselves. The U.S. role in World War I had disastrous consequences.

This week is the 100th anniversary of President Woodrow Wilson’s speech to Congress seeking a declaration of war against Germany. Many people celebrate this centenary of America’s emergence as a world power. But, when the Trump administration is bombing or rattling sabers at half a dozen nations while many Democrats clamor to fight Russia, it is worth reviewing World War One’s high hopes and dire results.

Wilson was narrowly re-elected in 1916 based on a campaign slogan, “He kept us out of war.” But Wilson had massively violated neutrality by providing armaments and money to the Allied powers that had been fighting Germany since 1914. In his war speech to Congress, Wilson hailed the U.S. government as “one of the champions of the rights of mankind” and proclaimed that “the world must be made safe for democracy.”

American soldiers fought bravely and helped turn the tide on the Western Front in late 1918. But the cost was far higher than Americans anticipated. More than a hundred thousand American soldiers died in the third bloodiest war in U.S. history. Another half million Americans perished from the Spanish flu epidemic spurred and spread by the war.

In his speech to Congress, Wilson declared, “We have no quarrel with the German people” and feel “sympathy and friendship” towards them. But his administration speedily commenced demonizing the “Huns.” One Army recruiting poster portrayed German troops as an ape ravaging a half-naked damsel beneath an appeal to “Destroy this mad brute.”

Wilson acted as if the congressional declaration of war against Germany was also a declaration of war against the Constitution. Harvard professor Irving Babbitt commented in 1924: “Wilson, in the pursuit of his scheme for world service, was led to make light of the constitutional checks on his authority and to reach out almost automatically for unlimited power.” Wilson even urged Congress to set up detention camps to quarantine “alien enemies.”

Wilson unleashed ruthless censorship of any criticism. Anyone who spoke publicly against military conscription was likely to get slammed with federal espionage or sedition charges. Possessing a pamphlet entitled Long Live the Constitution of the United States earned six months in jail for a Pennsylvania malcontent. Censorship was buttressed by fanatic propaganda campaigns led by the Committee on Public Information, a federal agency whose shameless motto was “faith in democracy… faith in fact.”

The war enabled the American equivalent of the Taliban to triumph on the home front. Prohibition advocates “indignantly insisted that… any kind of opposition to prohibition was sinister and subversively pro-German,” noted William Ross, author of World War 1 and the American Constitution. Even before the 18th Amendment (which banned alcohol consumption) was ratified, Wilson banned beer sales as a wartime measure. Prohibition was a public health disaster; the rate of alcoholism tripled during the 1920s. To punish lawbreakers, the federal government added poisons to industrial alcohol that was often converted into drinkable hooch; ten thousand people were killed as a result. Professor Deborah Blum, the author of The Poisoner’s Handbook, noted that “an official sense of higher purpose kept the poisoning program in place.”

The war provided the pretext for unprecedented federal domination of the economy. Washington promised that “food will win the war” and farmers vastly increased their plantings. Price supports and government credits for foreign buyers sent crop prices and land prices skyrocketing. However, when the credits ended in 1920, prices and land values plunged, spurring massive bankruptcies across rural America. This spurred perennial political discontent that helped lead to a federal takeover of agriculture by the Roosevelt administration in the 1930s.

World War One was ended by the Treaty of Versailles, which redrew European borders willy-nilly and imposed ruinous reparations on Germany. One of Wilson’s top aides at the peace talks, Henry White, lamented: “We had such high hopes of this adventure; we believed God called us and now we are doing hell’s dirtiest work.” Wilson had proclaimed 14 points to guide peace talks; instead, there were 14 separate small wars in Europe towards the end of his term — after peace had been proclaimed. Millions of Irish Americans were outraged that, despite Wilson’s bleatings about democracy, Britain brutally repressed Ireland during and after the war. The League of Nations, which Wilson championed in vain, was so smarmily worded that it could have obliged the U.S. to send troops to help Britain crush the burgeoning Irish independence movement.

The chaos and economic depression sowed by the war and the Treaty of Versailles helped open the door to some of the worst dictators in modern times, including Germany’s Adolf Hitler, Italy’s Benito Mussolini, and Vladimir Lenin — whom Wilson intensely disliked because “he felt the Bolshevik leader had stolen his ideas for world peace,” as historian Thomas Fleming noted in his 2003 masterpiece, The Illusion of Victory: America in World War 1.

Despite winning the war, Wilson’s Democratic Party was crushed at the polls in both 1918 and 1920. H.L. Mencken wrote on the eve of the 1920 election that Americans were sickened of Wilsonian “idealism that is oblique, confusing, dishonest, and ferocious.”

Have today’s policymakers learned anything from the debacle a century ago? Wilson continues to be invoked by politicians who believe America can achieve great things by warring abroad. The bellicosity of both Republican and Democratic leaders is a reminder that Wilson also failed to make democracy safe for the world.

One Response to USA Today: Woodrow Wilson Made Democracy Unsafe for the World