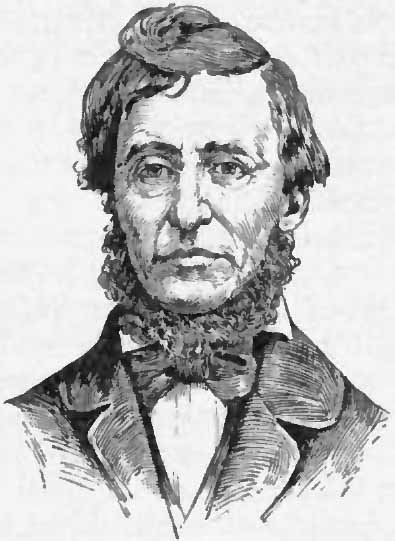 Henry David Thoreau was born 200 years ago this week.  His books and essays had a huge influence on my own life and writing.  At its best,  Thoreau’s writing is utterly captivating  – series of vivid images and  one thought after another driven home with a sledgehammer. In my late teens and early twenties, I used some of his axioms as literary and philosophical lodestars.  Here are some of my favorite Thoreau quotes:

I will give them a strong dose of myself.

If you see a man approaching you with the obvious intent of doing you good, run for your life. [I used this quote in the final paragraph of Lost Rights]

I would rather sit on a pumpkin and have it all to myself than to be crowded on a velvet cushion.

A single gentle rain makes the grass many shades greener. So our prospects brighten on the influx of better thoughts.

Most people… do not walk without their bed.

There is no more fatal blunderer than he who consumes the greater part of his life getting a living.

The cost of a thing is the amount of life which is required to be exchanged for it.

A man sits as many risks as he runs.

For what are the classics but the noblest recorded thoughts of man?

Our life is frittered away by detail.

There are a thousand hacking at the branches of evil to one who is striking at the root.

I am convinced, both by faith and experience, that to maintain one’s self on this earth is not a hardship but a pastime, if we will live simply and wisely.

The better part of the man is soon ploughed into the soil for compost.

Genius is a light which makes the darkness visible, like the lightning’s flash, which perchance shatters the temple of knowledge itself.

An early morning walk is a blessing for the whole day.

Fewer and fewer thoughts visit each growing man from year to year, for the grove in our minds is laid waste – sold to feed unnecessary fires of ambition, or sent to the mill – and there is scarcely a twig left for them to perch upon…. Our winged thoughts are turned to poultry.

A sentence should read as if its author, had he held a plow instead of a pen, could have drawn a furrow deep and straight to the end.

The scholar may be sure that he writes the tougher truth for the calluses on his palms. They give firmness to the sentence.

In the long run men hit only what they aim at. Therefore, though they should fail immediately, they had better aim at something high.

Individuals, like nations, must have suitable broad and natural boundaries, even a considerable neutral ground, between them.

Ironically, my experiences living in Boston spurred me to begin re-apprising some of Thoreau’s ideas and doctrines. Thoreau warned, “The ways by which you may get money almost without exception lead downward” and “A man had better starve at once than lose his innocence in the process of getting his bread.”    Actually, getting paid to masquerade as Santa Claus did no harm to my character or waist line.   Nor was I permanently corrupted by collecting paychecks one summer for goofing off  for the Virginia Highway Department.  Heck, I survived pretty much intact from working for the Census Bureau in 1980.   Admittedly, maybe I did not have a great deal of character to begin with prior to knocking on doors and inquiring about the number of bathrooms in each dwelling.

Thoreau’s disdain for exchanging labor for cash blinded him to the best shot for most people to achieve independence in their own lives.  Early in my writing career, before my articles were selling, being able to  jump in and out of the labor market financed my literary development.  I suspect that Thoreau would frown on Kelly Girl typist gigs.  Jobs – even when unpleasant – bought time to write. A bad job barely paid the cost of living while working. A good job left a swath of free time in its wake. I also rated jobs according to their mental fallow potential.  After the Great Storm of 1978, I worked as a snow shoveler for almost 2 days round-the-clock, thereby covering more than a month’s rent.  Best of all, I could fluff up my resume by citing my “path-breaking work at the Harvard Business School”  (where I shoveled snow).

Thoreau also proclaimed, “Cultivate poverty like a garden herb, like sage. Sell your clothes and keep your thoughts.” Reading that line decades ago, I treasured my thoughts but knew that I’d think better if I wasn’t bare-assed. Philosophy is no substitute for protein. Regardless of Thoreau’s adoration of rice, I needed red meat and beer to feed whatever muse I might have.  After reading Walden, I am wary of people who are pious about growing beans.  But it is folly to prefer the trappings of affluence for the reality of free time.

Thoreau is hailed as an evangelist for natural living, but his philosophy had an asterisk the size of the Hudson Bay. While living alone at Walden, Thoreau declaimed, “Chastity is the flowering of man.” I always believed that chastity was the best guide for conduct, at least until I reached puberty. But I had difficulty understanding how chastity begets flowering when it prohibits pollination.

In his early writing – especially his essay on “Civil Disobedience” – Thoreau  vividly portrayed the perils of political power.  However,  in the final five years of his life, he swooned for John Brown – who had already been involved in at least one grisly mass murder before Thoreau deified  him.  Thoreau descended from distrusting the State to becoming an apologist for bloodthirsty political fanaticism.  Thoreau’s abhorrence of slavery was perfectly justified.  But his cheerleading for John Brown (especially after Brown’s botched attempt to end slavery via a vast bloodbath in the south) may have had far more influence on his contemporaries than any of his other political commentary.  As historian Thomas Fleming noted, Thoreau “was transfixed by Brown’s attack on Harpers Ferry.  He all but babbled in his journal; Brown was Jesus.”  Thoreau and Ralph Waldo Emerson rallied northern opinion to see Brown as a saint instead of a terrorist.  The adulation that Brown received convinced some southerners that reconciliation was impossible because northerners wanted to see a cataclysm south of the Mason-Dixon line.