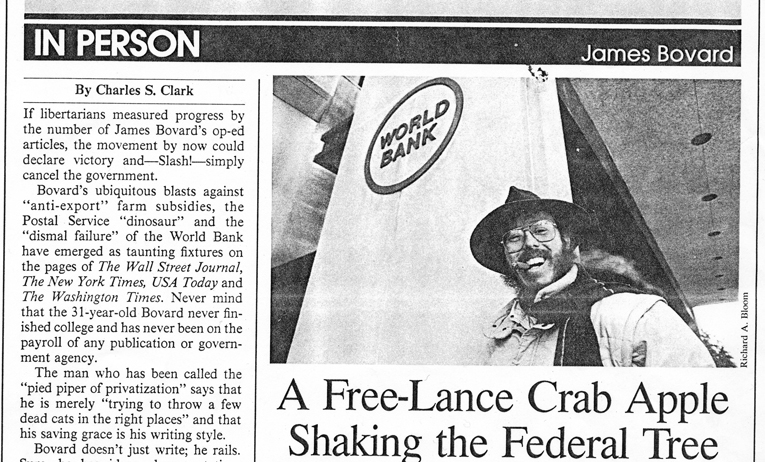 I was rummaging through old files tonight and stumbled across this profile from 30 years ago. Charles Clark did a kindly write-up which I much appreciated.  The World Bank hated me back then so National Journal photographer Richard Bloom and I tromped there for a cigar photo in front of their entrance on a bitter cold day.

I burst out laughing at the article’s reference to my “rented Washington duplex.”  It was a sprawling basement room in a group house.

Maybe folks who read this piece will appreciate how much I have mellowed.  Well, at least I refrain from cat references these days.  That 1988 reference was spurred by Mencken’s wonderful lines: “The liberation of the human mind has never been furthered by dunderheads; it has been furthered by gay fellows who heaved dead cats into sanctuaries and then went roistering down the highways of the world, proving to all men that doubt, after all, was safe—that the god in the sanctuary was finite in his power and hence a fraud. One horse-laugh is worth ten thousand syllogisms. ”

But federal agencies still accuse me of “taking things out of context” – which pains me deeply.

If libertarians measured progress by the number of James Bovard’s op-ed articles, the movement by now could declare victory and — Slash! — simply cancel the government.

Bovard’s ubiquitous blasts against “anti-export” farm subsidies, the Postal Service “dinosaur” and the “dismal failure” of the World Bank have emerged as taunting fixtures on the pages of The Wall Street Journal, The New York Times, USA Today and The Washington Times. Never mind that the 31-year-old Bovard never finished college and has never been on the payroll of any publication or government agency.

The man who has been called the “pied piper of privatization” says that he is merely “trying to throw a few dead cats in the right places” and that his saving grace is his writing style.

Bovard doesn’t just write; he rails. Sure, he has ideas, documentation, some semblance of the attitude of a responsible citizen. But his trick is the flippant phrasing — for instance, a description of the current trade bill as “one of the biggest blows to commerce since the fall of the Roman Empire.”

It is his libertarian philosophy that gives Bovard his entry into technical subjects, with agriculture providing much of his fodder. “Agriculture is an excellent case study of how the government works,” Bovard said. “It’s the politicians and bureaucrats [thinking they can] manage people’s lives better than themselves.” His first book, The Farm Fiasco, an expose of agricultural outrages, will be published in mid-April by San Francisco’s Institute for Contemporary Studies.

For the past three years, Bovard has published an average of 30 articles a year. The Wall Street Journal confirms that he is the paper’s most prolific nonstaff contributor. He has also appeared often on radio and on NBC’s Today Show and PBS’s Firing Line.

Though affiliated with the Cato Institute and the Competitive Enterprise Institute, Bovard lobs his editorial salvos from a home computer at his rented Washington duplex. Still, he is a regular at such events as the World Bank’s annual meeting, and recounts gleefully how he was “nearly thrown out” of last September’s for trying to blanket the press corps with copies of a Cato paper, violating a Bank policy against outside publications.

Most recently, a Bovard paper lambasting the World Bank for giving socialist governments money “to postpone reform” was cited in The Washington Times by former White House communications director Patrick J. Buchanan, who called it “as fine and comprehensive a paper as any think tank has lately produced.

But critics say Bovard is selective, that he takes things out of context. “He has his ax to grind, he’s always off-base and his timing’s bad,” said World Bank spokesman Peter Riddleberger, noting that last September, Bovard’s Wall Street Journal attack on the Bank’s structural adjustment lending came out on the day the Treasury Department announced approval of the Bank’s capital increase and that the Bank’s new multilateral investment guarantee program cleared Congress the very day a Bovard piece tried to shoot it full of holes.

Though Bovard is notorious at the Postal Service (a speech of his on privatization once brought 300 postmasters to their feet, sputtering mad), Frank S. Johnson J., assistant postmaster general for communications, compared him to “a fly on the neck of a horse — some of us know he’s there, but we don’t spend a lot of time trying to get him off.”

Raised in Front Royal, Va., Bovard spent two years at Virginia Polytechnic Institute but said he soon decided he could learn better on his own. Moving to Boston, he paid the rent as a typist and a department store Santa Claus and holed up with the works of free-market economists — Friedman, von Hayek, von Mises. In 1979, at age 22, he placed his first major piece, a satirical proposal that Member of Congress be drafted, in The New York Times. He moved to Washington just in time for the Reagan era.

Like many libertarians (“except on defense, where I’m a hard-liner”), Bovard is conservative enough to think that President Reagan isn’t conservative enough. “The tragedy of the 1980s is that the people who favor a free market have rolled over and played dead,” Bovard said. “People think that if Reagan [accepts auto import quotas or a huge farm bill], it’s not so bad. But if Carter had done it, half the right wing would be having heart attacks.”

Regardless of who’s in the White House, there will probably always be room for a free-lance crab apple who likes to scour government documents for proof that politicians deal from the bottom of the deck. As Bovard put it: “There’s no learning curve in federal policy. The government makes the same mistakes year after year.”