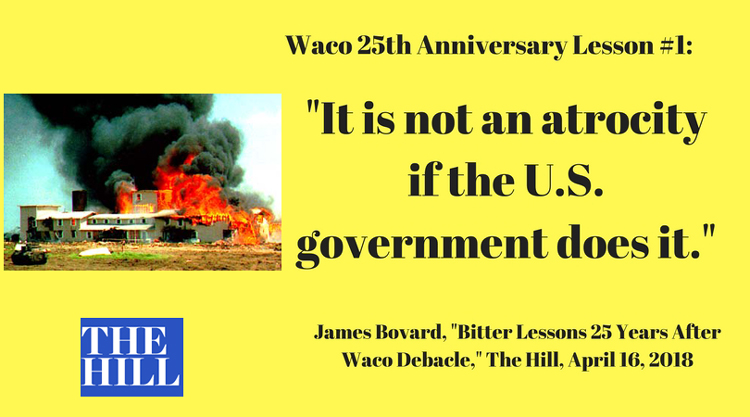 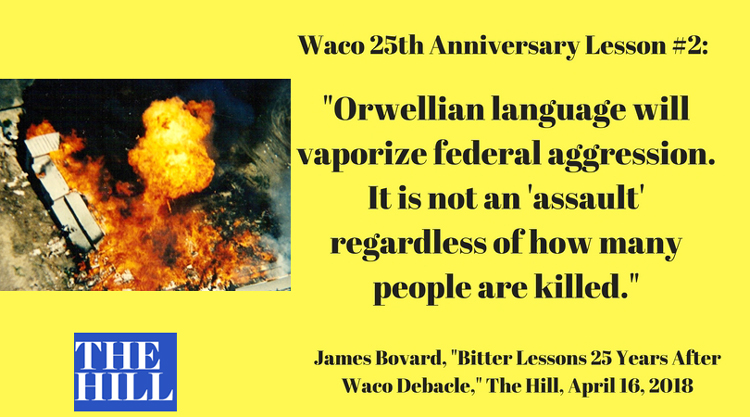 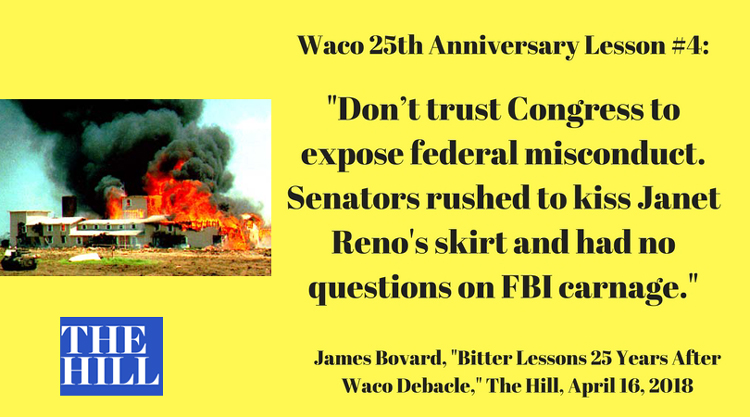 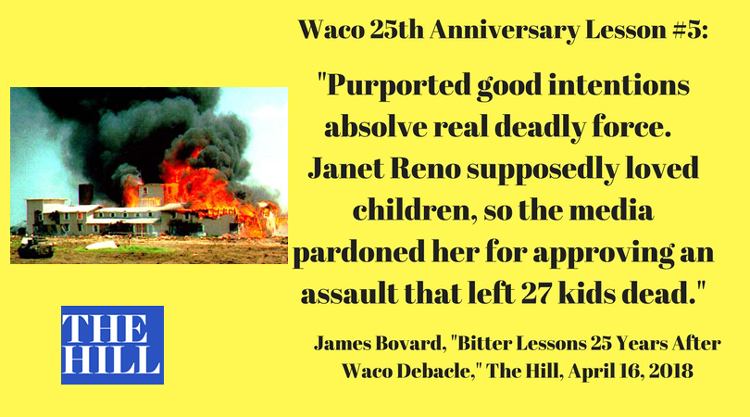 Twenty-five years ago today, FBI tanks smashed into the ramshackle home of the Branch Davidians outside Waco, Texas. After the FBI collapsed much of the building atop the residents, a fire erupted and 76 corpses were dug out of the rubble. Unfortunately, the American political system and media have never faced the lessons from that tragic 1993 day.

Fifty-nine days before the FBI final assault, scores of federal Alcohol Tobacco and Firearms agents launched an attack on the Davidians’ home spurred by allegations that they had converted semi-automatic rifles to full-automatic capacity. The ATF’s lead investigator had previously rejected an offer to peacefully search the Davidians’ home for firearms violations. Four ATF agents and six Davidians were killed in the fracas on February 28, 1993. At least one ATF agent told superiors that the ATF fired first, spurring an immediate end to the official shooting review. But the media trumpeted the ATF storyline that its agents had been ambushed, entitling the feds to be far more aggressive in the following weeks.

What lessons can today’s Americans draw from the FBI showdown on the Texas plains a quarter century ago?

Janet Reno, the nation’s first female attorney general, approved the FBI’s assault on the Davidians. Previously, she had zealously prosecuted child abuse cases in Dade County, Fla, though many of her high-profile convictions were later overturned because of gross violations of due process. Reno approved the FBI assault after being told “babies were being beaten.” It is not known who told her about the false claims of child abuse. Reno’s sterling reputation helped the government avoid any apparent culpability for the deaths of 27 children on April 19, 1993. After Reno publicly promised to take responsibility for the outcome at Waco, the subsequent Justice Department investigation was so shoddy that even the New York Times denounced the “Waco whitewash.”

It is not an atrocity if the U.S. government does it.

Shortly before the Waco showdown, U.S. government officials signed an international Chemical Weapons Convention treaty pledging never to use nerve agents, mustard gas, and other compounds, including tear gas against enemy soldiers. But the treaty contained a loophole permitting governments to gas their own people. On April 19, 1993, the FBI pumped CS gas and methyl chloride, a potentially lethal, flammable combination, into the Davidians’ residence for six hours, disregarding explicit warnings that CS gas should not be used indoors.

Rep. Steven Schiff (R-N.M.) declared that “the deaths of dozens of men, women and children can be directly and indirectly attributable to the use of this gas in the way it was injected by the FBI.” Chemistry professor George Uhlig testified to Congress in 1995 that the FBI gas attack probably “suffocated the children early on” and may have converted their poorly ventilated bunker into an area “similar to one of the gas chambers used by the Nazis at Auschwitz.”

As Abrams tanks driven by FBI agents continually battered the Davidian’s home, FBI loudspeakers endlessly broadcast: “This is not an assault.” Prior to the fire, the tanks had collapsed 20 percent of the building atop its residents and the FBI planned to totally demolish the home. Grenade launchers on the tanks and other armored vehicles fired almost 400 ferret rounds of CS gas through the thin wooden walls and the windows of the building. Yet Attorney General Reno later insisted: “We didn’t attack. We tried to exercise every restraint possible to avoid violence.” Demolishing someone’s home was supposedly no more bothersome than leaving a Federal Express package on their doorstep.

The FBI speedily asserted that the Davidians ignited the fire that consumed their dwelling. The following day, the President Bill Clinton deriding suggestions that Attorney General Reno “should resign because some religious fanatics murdered themselves.” Six years later, independent investigators found pyrotechnic ferret rounds the FBI fired at the scene prior to the flames erupting. Attorney General Reno lashed out at the FBI for destroying her credibility but neither she nor FBI officials suffered any consequences from the collapse of the official narrative.

A few days after the conflagration, Reno was heartily praised at a Senate committee hearing and the media had made her a national hero. There was little or no sympathy on Capitol Hill for those who died during the final FBI assault. Rep. Jack Brooks (D-Texas), chairman of the House Judiciary Committee, commented that the Davidians were “horrible people. Despicable people. Burning to death was too good for them.” If Republicans had not captured control of Congress in 1994, there would have been no substantive hearings on Waco.

When Attorney General Reno testified to the House Waco hearing on August 1, 1995, she was challenged on FBI’s use of 54-ton tanks to assail the Davidians. Reno replied that the tanks were “not military weapons… I mean, it was like a good rent-a-car.” When Rep. Bill Zeliff (R-N.H.) challenged her, Reno hectored: “I think it is important, Mr. Chairman, as you deal with this issue, not to make statements like that can cause the confusion.” This is the high-toned D.C. version of the old saying: “Who are you going to believe — me or your lying eyes?” Media coverage of Reno’s showdown with congressional Republicans ignored her rent-a-tank absurdity, instead praising her toughness and demeanor.

While the events at Waco alienated millions of Americans from the government, few if any lessons were learned in Washington. Waco should have taught the disastrous consequences of unleashing government agencies from the law and the Constitution. Unfortunately, 25 years later, controversies are raging as hot as ever about the power and prerogatives of federal law enforcement.

Syria: Trump as a Lynch Mob with Cruise Missiles
FFF: Trump and the Right to #Resist

7 Responses to The Hill: Bitter Lessons 25 Years After FBI Final Assault at Waco