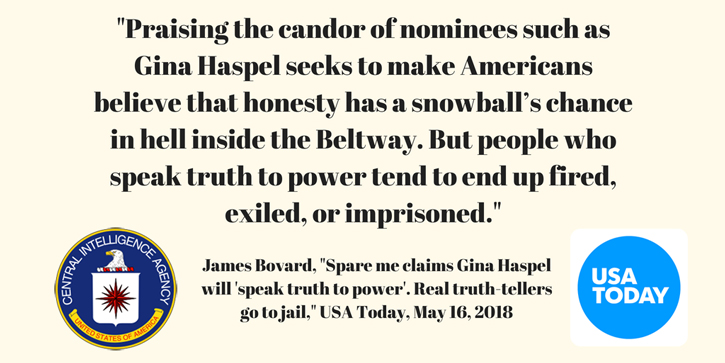 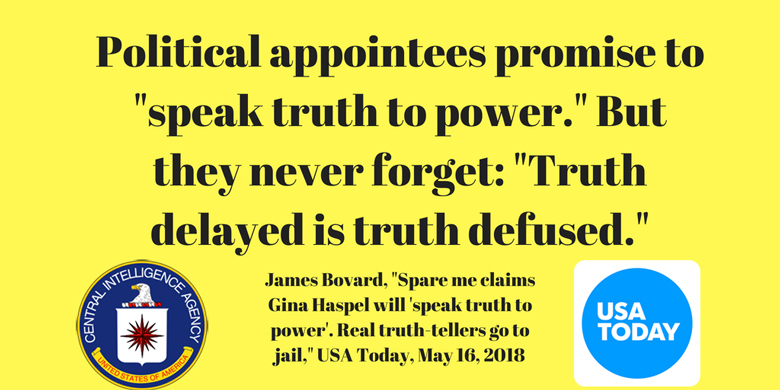 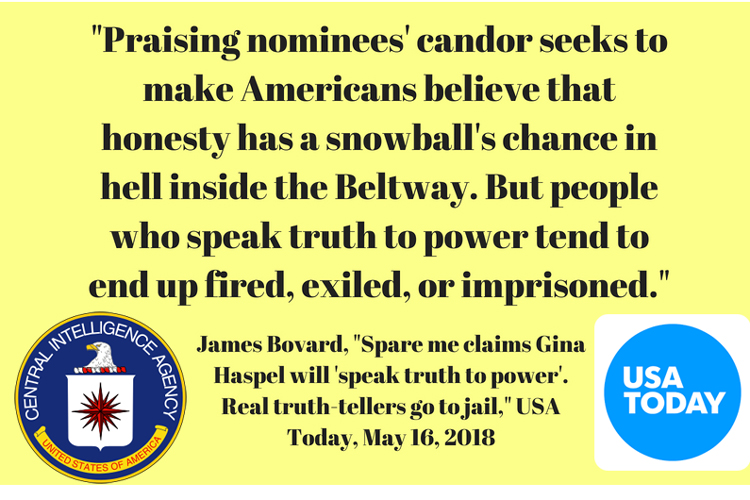 Gina Haspel and other intelligence leaders all have shady pasts but real truth-tellers get disgraced.

In the Senate Intelligence Committee secret vote today on whether to confirm Trump nominee Gina Haspel as chief of the CIA, she will likely again be praised for promising to “speak truth to power.” This has recently become one of the favorite accolades in the least trusted city in America. But will Americans be as gullible this time around?

When 7-term congressman and dutiful Republican functionary Porter Goss was nominated in 2004 to become CIA chief, Sen. Barbara Mikulski (D-MD) endorsed him after he promised to “always speak truth to power.” Fat chance: after he was confirmed, Goss speedily sent a memo to CIA employees muzzling them, declaring that their job was to “support the administration and its policies in our work.” Goss bungled the CIA so badly that the Bush administration heaved him out after less than two years on the job; Goss later became a lobbyist for the Turkish government.

“Speaks truth to power” had a starring role in the 2005 Senate coronation of John Negroponte, America’s first Director of National Intelligence. While working as Reagan’s ambassador to Honduras, Negroponte perennially denied that the Honduran regime was committing vast atrocities, despite its killing of tens of thousands of its own citizens. (Honduras was aiding the Nicaraguan Contras at the time.) But that did not deter Sen. Jay Rockefeller, D-W.Va., Sen. Jon Corzine, D-N.J., and Sen. Mikulski from recycling the “truth to power” phrase in speeches endorsing Negroponte.

When Michael Hayden was nominated as CIA chief in 2006, Sen. Carl Levin (D-MI) vouched that Hayden would “speak truth to power.” But Hayden profoundly misled Congress regarding the CIA’s torture program and his credibility was demolished in the 2014 Senate Intelligence Committee report on the enhanced interrogation program.

From 2010 to 2016, James Clapper served as Director of National Intelligence. He scored a “speaks truth to power” honorific when Defense Secretary Ash Carter awarded him the Distinguished Civilian Service Medal in 2016. He is much better known for his false 2013 congressional testimony denying that the National Security Agency collected data on millions of Americans.

And now it is Gina Haspel’s turn. The Haspel nomination is perhaps the biggest charade of the season since she, as acting CIA chief, has discretion to determine exactly what details from her 33 year CIA career are disclosed to Congress. The public heard about Haspel meeting Mother Teresa but details on Haspel’s linchpin role in the torture scandal and the destruction of evidence have been sparse.

Praising nominees’ candor seeks to make Americans believe that honesty has a snowball’s chance in hell inside the Beltway. But people who speak truth to power tend to end up fired, exiled, or imprisoned:

► Lawrence Lindsay was former president George W. Bush’s economic advisor — until he predicted that Bush’s war on Iraq could cost $200 billion. (The actual costs of the war far exceeded $2 trillion.)

► Eric Shinseki was U.S. Army chief of staff — until he testified to Congress in 2003 that “several hundred thousand soldiers” would be necessary to occupy Iraq after Bush invaded that nation.

► CIA agent John Kiriakou disclosed that the CIA was waterboarding detainees and was prosecuted by the Obama administration Justice Department — the only CIA official to be sent to prison for the torture scandal.

The notion that some official will stalwartly tell the truth is supposed to spur Americans’ faith that Washington can be redeemed — as if  we are only two or three nominations away from honest government.  This is why “speaks truth to power” is lathered onto almost any nominee without multiple perjury convictions.  But it is remains the political equivalent of a used car dealer swearing a vehicle was previously owned by a grannie who only drove on Sunday afternoons.

“Truth delayed is truth defused” is a much better guide on how most political appointees will behave. But, as former New York City mayor Michael Bloomberg declared in a recent commencement address, “When we tolerate dishonesty, we get criminality.” Bloomberg labeled “our own willingness to tolerate dishonesty in service of party, and in pursuit of power” as “the greatest threat to American democracy.” Unfortunately, Bloomberg’s warnings will have little or no impact on the Senate’s conduct regarding Haspel or future nominees.